It's a good thing Ed and I get along, or this 130+ days of sheltering in place would get even older than it is getting. We rarely quarrel, but I must confess that there is one thing that we can't seem to agree on. And it's causing angst in our marriage. 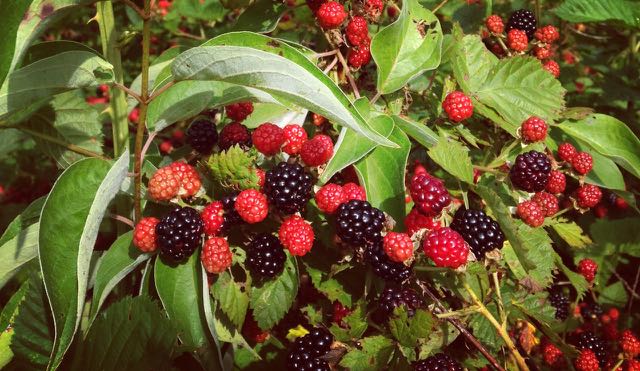 The problem is: I love a good fruit crisp. One with lots of fruit and a fairly thick layer of crunchy oats, brown sugar, and almonds, bound together with some butter. One like the one found on page 689 of Deborah Madison's Vegetarian Cooking for Everyone. 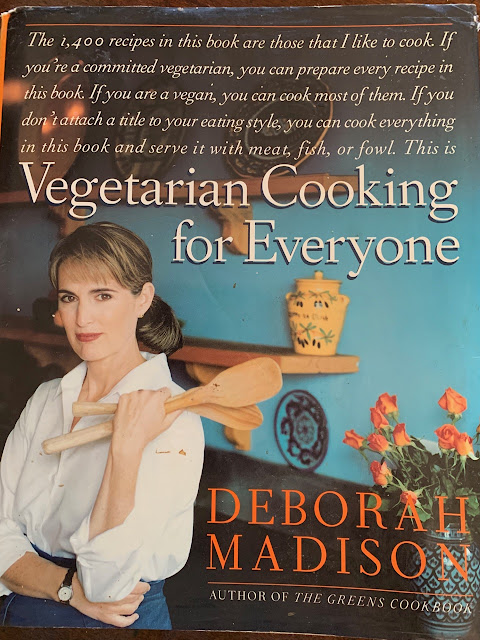 I love to make crisps with the gallons and gallons of wild blackberries that we pick each July. And every time I make one and bring it to the table. Ed says: "This is good, but some people prefer a cobbler." He is one of them; I am not. 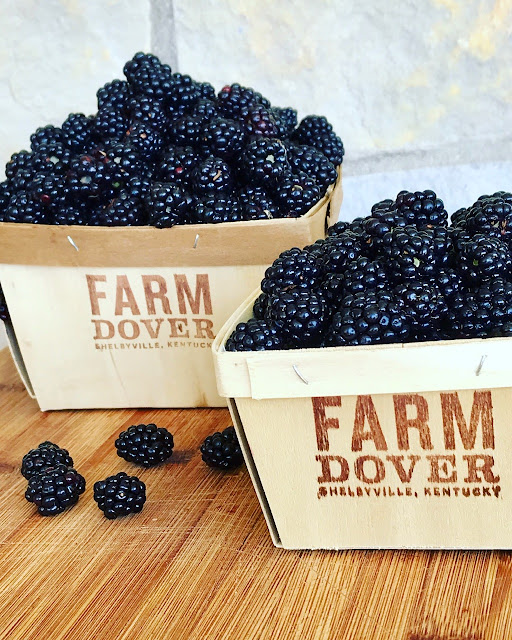 What was wrong with him? I continued to make crisps. 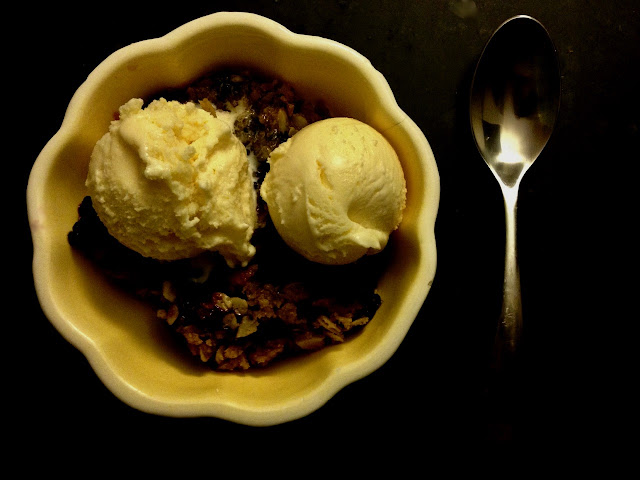 But then I started to wonder if perhaps he was right and that maybe I could learn to love a good cobbler. Was I just being stubborn? So I turned to page 691 of the above-mentioned cookbook and made a cobbler. Ed was thrilled; me less so. I just don't like the cakey topping. 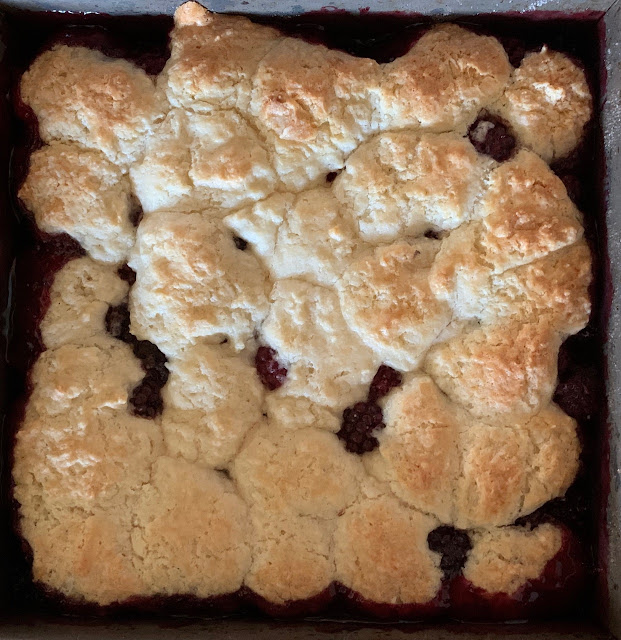 I then conducted a survey. I asked Jack which he preferred, secretly trying to line the kids up on my side. Without hesitation, he said, "I prefer a pie."

And that got me to thinking. Perhaps the solution for our impasse was to find a solution we could both agree on. So, today I made a clafoutis, a 19th-century french dessert that traditionally uses black cherries. My version featured Farm Dover wild blackberries nestled in a thick flan-like batter. (Technically, when other kinds of fruit are used instead of cherries, the dish is properly call a flaugnarde.) It was super simple to make.

I'm planning to serve it tonight, but snuck a bite out of the skillet while it was still warm. Not as good, in my opinion as a crisp, but much better than a cobbler. I think it might work for us and allow us to get back to our normal state of marital bliss. 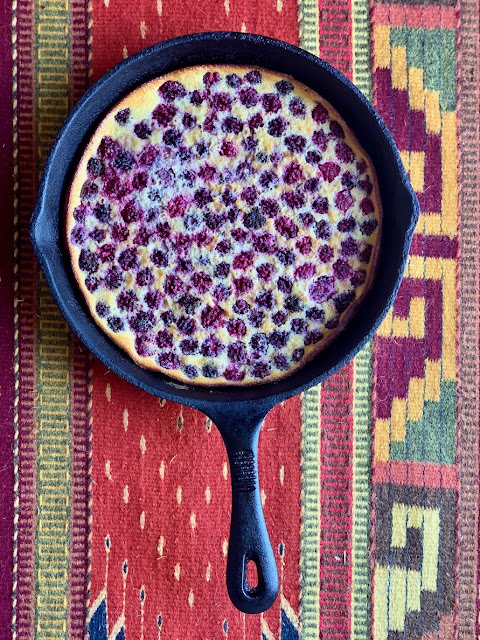 If not, I could always try a Brown Betty, a buckle, a grunt, hand pie, slump or pandowdy.  I'm willing to work on saving our marriage thru baking and Ed says he is willing to give it a go as well. Wish us luck.

2. Lay blackberries in a single layer in the baking dish.

3. Using an immersion blender, mix the eggs, flour, vanilla and almond extracts, 1/2 cup sugar and milk together until smooth.

4. Pour the batter over the blackberries and sprinkle fruit and batter with 3 tablespoons of sugar.

5. Bake the clafoutis until the custard is just set; a knife polked in the center should emerge relatively clean. It will take about 45 minutes.


Posted by Debbie Galloway at 5:03 PM No comments:

Celebrate, when the time feels right

Rather, it was the timing. You see, I was born on January 19th and the very thought of celebrating so soon after the holidays just made me crazy. All I wanted to do in mid-January was hibernate.

And it wasn't just me. No one in my family or dear friends really wanted to figure out another gift or eat more celebratory food. All they wanted to do was hibernate.

A couple of years ago, I was grumbling about this unfortunate birthday business and curmudgeonly joked to Ed that I thought I should just change my birthday to July 19th. Then, I thought no more about it.

Fast forward to that July 19th, a Thursday. Like every Thursday two years ago, we drove to Louisville for Ed to check in at work and go to Rotary and for me to visit with my Dad and run in-town errands. Ed suggested we stay in town for an early dinner. As we pulled up to Holy Grale, Maggie appeared from around the corner, with gift in hand. And Ed magically pulled out a present from the back seat. They had colluded to celebrate my birth that night. A tradition was born, a wonderful, embraceable tradition.

This year, my week of celebration began on Thursday, with an alfresco lunch with girlfriends, continued on Sunday with dinner with Maggie and family and calls from Mary and Jack, and culminated today with a very early morning outing to Bernheim Forest for a hike to experience "Forest Giants in a Giant Forest," an art installation by Danish artist Thomas Dambo. The installation is comprised of three large structures placed throughout the arboretum built using recycled wood from the region.  I can't tell you how cool (and gigantic!) they are. They won't be there forever. So, get yourself down to Clemont, Ky. and see for yourself.


So, thank you to all who made my birthday so happy. I am truly grateful.

When time is on your side

More than 100 days into the Time of Corona, we are still hunkered down. Yes, we venture out, but only occasionally. When we are away from Farm Dover, we find ourselves anxious to get back home – back to where we feel safe. Fortunately, I like it here.


Other than a handful of takeout lunches, our meals are created from whatever we have on hand or can harvest from the garden or forage from the woods and fields. Since I'm not cooking for a crowd, our meals tend to be quite simple. Sometimes only anchovy butter on sour dough toast, or carrots roasted and served with a carrot-top pesto, an Ottolenghi omelette, or asparagus from our patch cooked every which way I can think of. 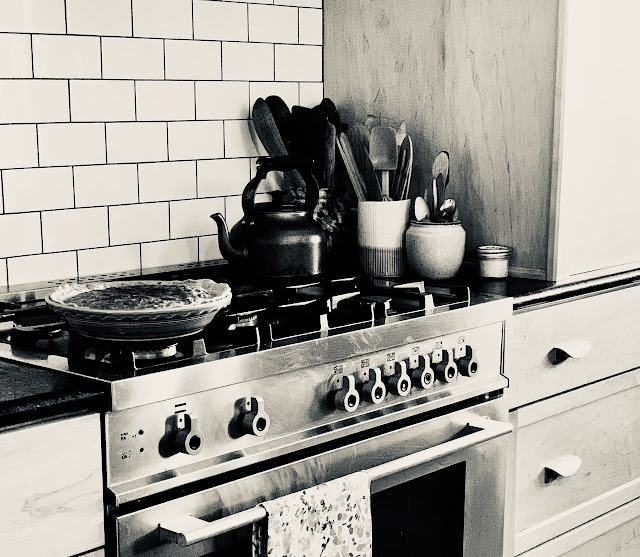 Most nights I wander into the kitchen while Ed watches the local news. If I don't have a pre-conceived notion of what I want to fix for dinner, I putter around until I come up with a plan. Rarely do I spend more than an hour cooking dinner; most nights, half that amount. It's time I enjoy, creative and stress-free for me. 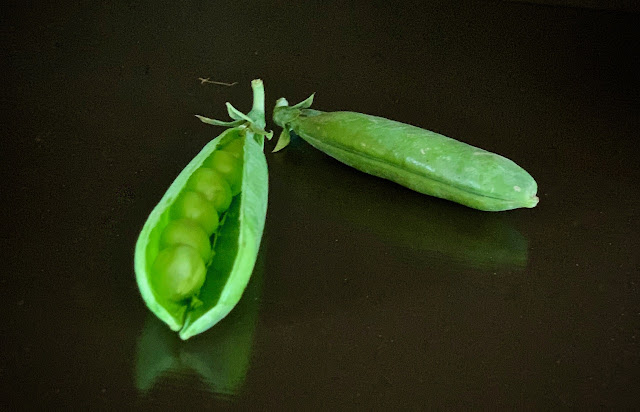 One of the many strange outcomes of this strange time is that my notion of cooking has shifted ever so slightly. Because I'm home all day, it seems I'm more willing to invest in dishes that require time, in some cases, lots of time. But they don't necessarily require my constant attention; they mostly transform into something delicious on their own over a matter of hours, or even days. Call it kitchen alchemy, a seemingly magical process.

Let me give you some examples. Three come from a blog post: The 20 Greatest Recipes of All Time. Granted this was just one person's opinion, but the list intrigued me. I had already made a handful of Ms. Rosenstrach's nominations and I agreed that they were awfully good. I chose three new ones to try – each requiring a significant commitment of time. I was curious to see if it was worth it. And, as you know, I had lots of time on my side.

The first was Marcella Hazan's Bolognese Sauce, reprinted in the New York Times, which notes a total time requirement of four hours. But then I read through all the reader comments and discovered that the real magic happens sometime between hours 5 and 6, when the classic meat sauce turns sublime. All the recipe requires of me is to let it cook at "the laziest of simmers" and to give it a stir every hour or so. I almost never follow a recipe exactly, but both times I've made this, I have followed it to a T and can't think of how I might alter it. It is perfect, as is.

The second was David Chang's Bo Ssam, a dish from his famous New York restaurant: Momofuku. It's a slow-cooked pork shoulder with an insane caramelized crust, served in lettuce wraps with Korean-inspired condiments. I know, sounds weird. The recipe calls for marinating the pork for six hours in a sugar/salt brine and then cooking it for six hours. I did not follow the recipe exactly as I did not have any fresh oysters or cabbage kimchi. I did made some pickled radishes to go along with the sweet chili sauce and ginger scallion sauce and I did serve it in lettuce wraps. Maggie, Nate and Hazel were out visiting and I served it for dinner. It was a hit! Delicious and fun to eat. I placed the pork in the middle of the table on a giant cutting board and we each customized our wraps. Next time, I think I could cook the pork roast in a crock pot for the first six hours and finish it in a 500-degree oven for the last 10 minutes to get a crisp, sweet crust. I only made this once, but it will be on repeat whenever we can host dinners again.

The third entrée was a classic Japanese fish preparation made famous by the chef Nobu Matsuhisa. The recipe calls for soaking a black cod filet for three days in a four-ingredient miso marinade. It does require some specialty Japanese ingredients, which Maggie fortunately had in her pantry: sake, mirin, and white miso paste. But, it only takes 10 minutes to cook. I used sea bass instead of black cod, but any high-fat fish would work. I served it with some bok choy and rice. So simple. Foolproof and very impressive.

There are some other recipes that I have made in the past 100+ days that also require some time commitments. In particular, this Shockingly Easy Foccccia and this Homemade Naan were ones I'll make again and again. 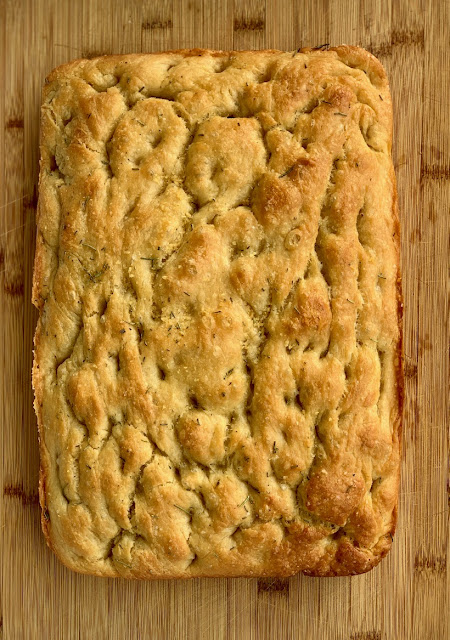 I had always shied away from recipes that required marinating, yeast, or long stove-top cooking times, but, if anything, this time at home has taught me that sometimes really good things come to those who wait and, with a little kitchen alchemy – and plenty of time – seemingly magical things can happen.


Posted by Debbie Galloway at 5:46 PM No comments: