The Spirit of Juniper

Just back from a week of bass fishing at The Juniper Club on the Silver Glen of Lake George, near Ocala, Florida. It's one of my favorite places on earth. The club was founded in 1909 by a group of thirty-four influential Louisville business and professional men and has grown over the years to more than 70 members, many of whom are grandsons of the founders.

While all the members are men and while many of the camps are stag, about the half the camps are now attended by spouses, widows of members and other female guests. Lucky me. For five days, Ed and I fished; we read; we ate; we slept. And then the next morning we started all over.

Posted by Debbie Galloway at 5:16 PM No comments:

The Blessings of Betty

Make the community able to invest in itself...by caring for its old people, and teaching its children.
– Wendell Berry
Funny how funerals make you think about life.

Betty Y.’s funeral was this morning and Ed and I drove into town for it. It took place in Second Presbyterian's chapel where we had worshiped with Betty for more than 20 years. Like us, Betty was an 8:30-service person. Our regular seats were in the pew just behind her.  For the past decade or so, her head would bob slightly – perhaps from old age, but more likely in agreement with the sermon.

I’m sure lots of people will miss Betty. Certainly, Mary, our youngest, will. Their friendship goes back nearly a decade, but was reinforced each Sunday morning when Betty would turn around to offer us the sign of peace – with an extra squeeze of Mary’s hand, her eyes twinkling.

It all started by the time Mary was 13. One of Mary’s confirmation assignments was to interview a member of our congregation. Mary chose Betty, mostly I think, because she wasn’t scary and had always been gracious and kind and shown interest in Mary. I dropped Mary off at Betty's front door. The interview lasted most of an afternoon; Betty made Mary feel right at home as she settled in on the sofa in Betty’s front living room. While Mary was the one who was supposed to be asking the questions, the conversation would inevitably turn back to Mary. What did she think? What was new in her world?

This conversation continued on for years. Mary would stop by her house and Betty would welcome her in. The last time was the week after Christmas. Mary stopped by with some homemade cheese straws and the conversation picked right up. What’s new in your world?, Betty wanted to know.

And what is new in your world Betty?, Mary asked. And then, more tentatively: How are your cancer treatments going? Betty said she was feeling pretty fine. Her four children, their spouses, and her five grandchildren had all been around for the holidays. She had loved every bit of it, but was looking forward to some quieter days working puzzles with her sister, Frances. She reassured Mary that while she might die with cancer; she certainly was not going to die of it. Be assured.

Betty was a blessing in Mary’s life. She forms a long line of people who have circled around our children: Bunch, Tom, Joe, Patrice, Glenda, Carol, Karen, Jane, Beth, Leanne, Randal, aunts, uncles, and other dear family and friends. Each has encouraged them when they needed encouraging; cheered for them when they needed cheering; thought of them just when they needed thinking of, remembered them on big and small occasions. Ed and I are indebted to all these people. It is by their actions that our children (now grown) have felt the love of community and now know how to render it to others.

Posted by Debbie Galloway at 5:25 PM No comments:

The Joy of Quiet

Since we moved to the country, we have given up reading current newspapers (except for the Shelby County Sentinel-News). Instead, we read the Sunday New York Times a week late -- or sometimes a couple of weeks late. Other than the front page headlines, I find it doesn't really matter. Here's an article that I read yesterday about the joy of quiet.

Did you get to the part that says:

A series of tests in recent years has shown that after spending time in quiet rural settings, subjects “exhibit greater attentiveness, stronger memory and generally improved cognition. Their brains become both calmer and sharper.” More than that, empathy, as well as deep thought, depends on neural processes that are “inherently slow.” The very ones our high-speed lives have little time for.

Bodes well for us! Posted by Debbie Galloway at 9:35 AM No comments:

The calendar says it is mid-winter. Yet as I walk this morning the sun is warm on my face and I hear more bird song than in the past few weeks. The cardinal pairs are whistling their clear metallic chirp and I glimpse a Kentucky Warbler high in a tree singing its chuuree, chuuree song. Overhead, calls from a flock of Canada Geese flying in V-formation, signal to me the transition into a new season. Even though we have hardly had a winter, I am giddy with hopes for Spring.

I think my giddiness for Spring springs from my new garden. Since I last posted about staking it and applying straw to the top layer, much has happened. Danny showed up and added a layer of cow manure and then plowed up the entire garden. Maggie has been busy researching and ordering seeds from the Baker Creek Heirloom Seed catalog and has promised to get some seeds started in-doors for a jump start on the season. And Ed used a broadfork this past weekend to break up the larger lumps of clay. As you can tell, my new garden is turning into a community garden.

For my part, I took soil samples to the Shelby County Cooperative Extension Service. Fourteen days later, I received a detailed report on the state of my soil. Unfortunately, I had no idea what it was reporting -- high school chemistry was not my forte.

Fortunately, I rely on the kindness of strangers, or, in this case, a new friend: Steve, proprietor of Fresh Start Growers' Supply on East Jefferson Street in downtown Louisville. In two seconds time, he informed me that I needed to make some amends. Specifically, my new garden needed some added nitrogen, potash and lime. I left there with 6 lbs. of sulfur, 10 lbs. of something called "Fluff the Bed" (a custom-blended fertilizer), and something else in a large unmarked bag. I also had a bag of organic winter rye to use as a cover crop and Steve assured me that it would sprout when the temperature reached 35 degrees (no problem these last two weeks).

So, this past weekend I amended the garden just as I was instructed and then broadcast the rye seed. As a cover crop, rye is supposed to hold the soil in place against the forces of wind and water and have a positive effect on soil tilth. I know it is having a positive effect on my disposition. Come on Spring!
Posted by Debbie Galloway at 1:11 PM No comments:

Crazy, Confused and Other Effects of Global Warming 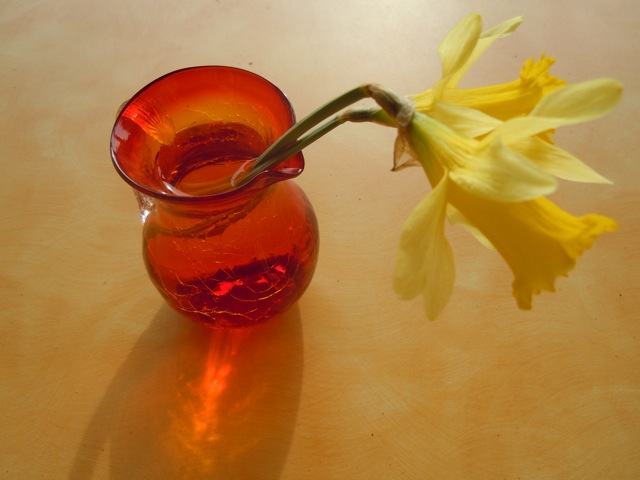 Posted by Debbie Galloway at 11:05 AM No comments: