Lost in Translation: A Feeling of "Saudade"

There are some words that just don't have a good English translation. I recently ran across one that perfectly describes our recent trip to Portugal, and remarkably, it is a Portuguese word, with no direct translation to any other language.

The word is saudade, a beautiful word that means the feeling of longing for something or someone that you love and which is (almost) lost. It evokes a melancholic longing or nostalgia for something or someone that is far away from you. It brings sad and happy feelings altogether: sadness for missing and happiness for having experienced the feeling.

I'm overwhelmed by a feeling of saudade when I look back on our recent trip to Portugal (and then on to Morocco -- but more on that later). I think it's because we almost didn't make the trip. Four days before we were supposed to leave, Ed developed a great pain in his side. Not one to complain, I was astounded when he agreed to get checked out by a doctor. Next thing I knew, we were at Norton Brownsboro Hospital and the ER doctor was confirming that Ed was suffering from appendicitis. A few hours later he was appendix-less and in recovery and determined to board the plane. And so, with the doctor's guarded blessing, that's what we did on Monday morning.

For the whole trip, I was so grateful for his returned health that it made every day all the more poignant. It gave me this feeling of saudade, for something that (almost) wasn't.

We spent 11 days exploring Portugal, with three days each in Lisbon and Porto, both lovely cities filled with orange tiled roofs and flat decorative tile outside walls. We enjoyed the bluest skies for more days in a row than I thought possible. On one of our days in Lisbon, we took a train to nearby Sintra, which looks like it was built for a Disney princess-movie set. 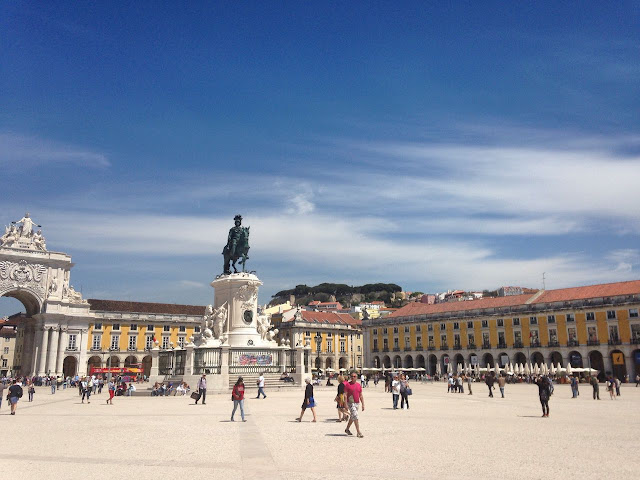 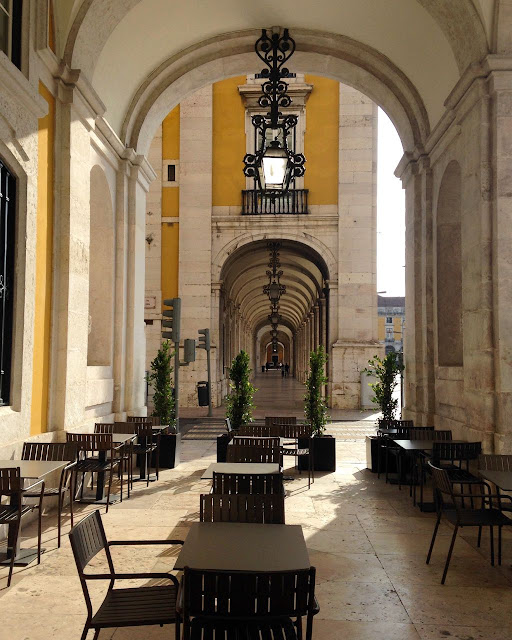 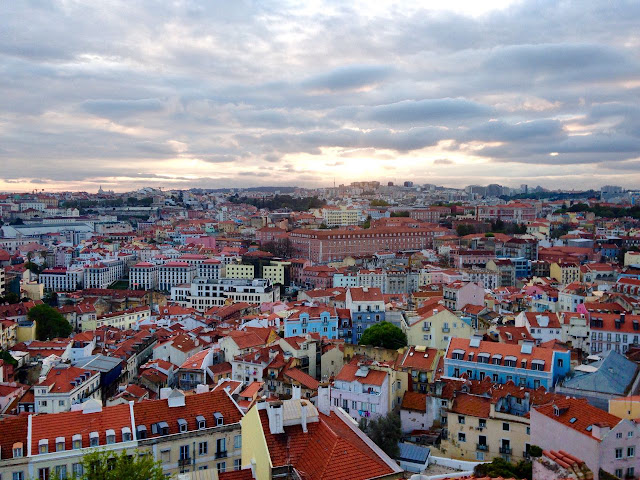 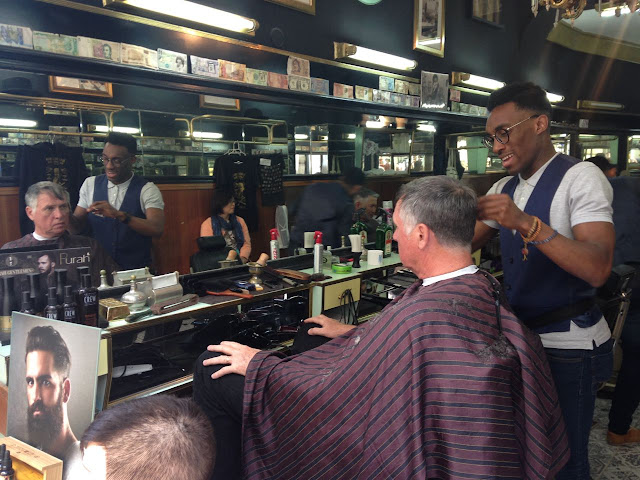 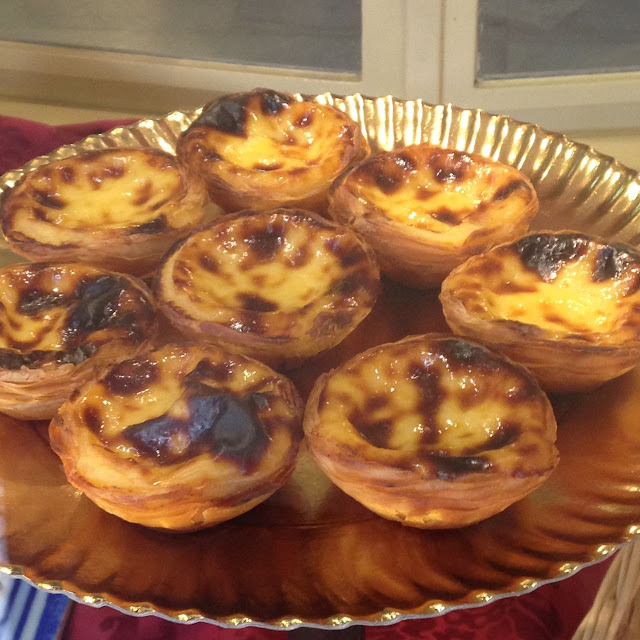 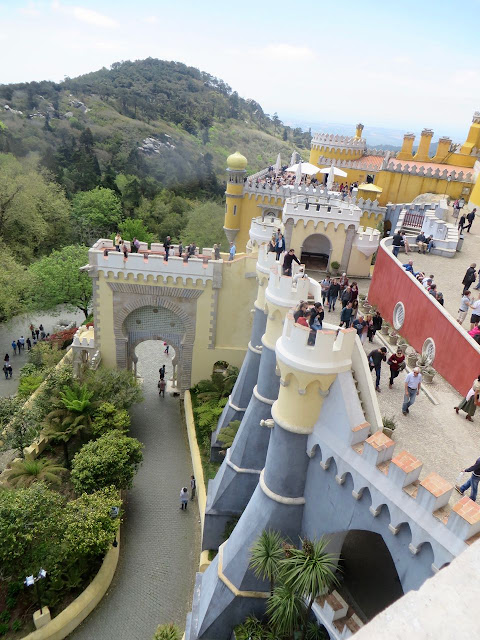 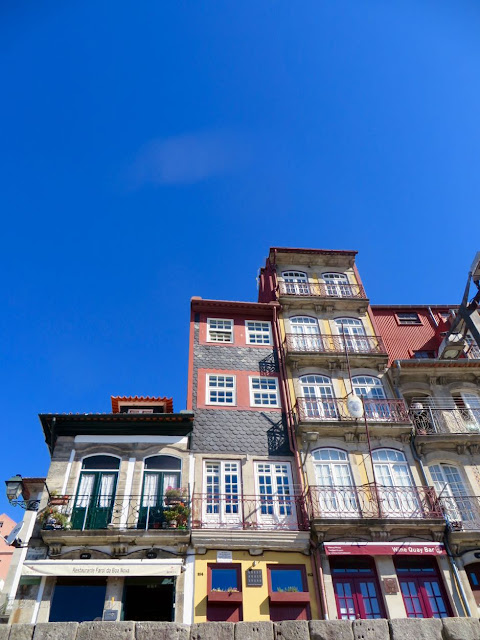 From there, it was on to the Douro Valley, known for its vineyards that produce the grapes for Port. We drove past field after field of cultivated grapes, wild red poppies and yellow buttercups, silvery olive trees bordered by wisteria, lilacs, hollyhocks and mulberry trees. 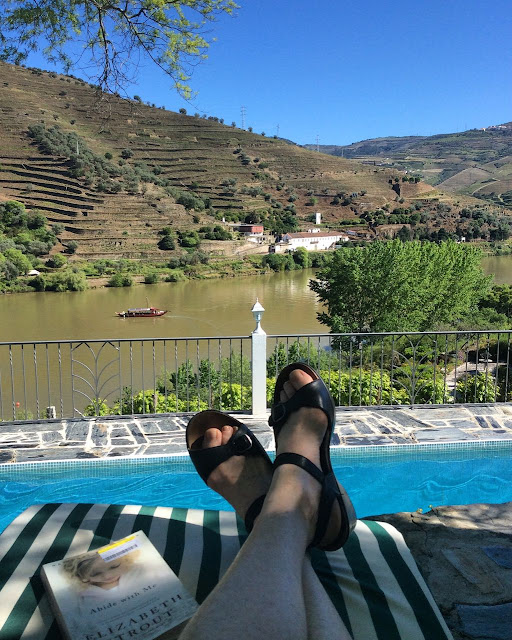 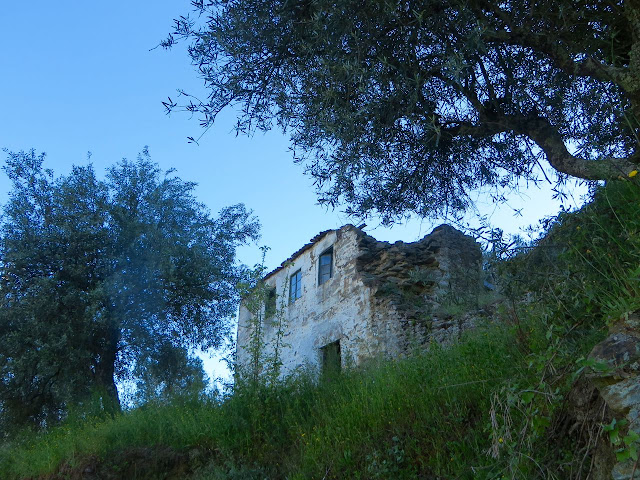 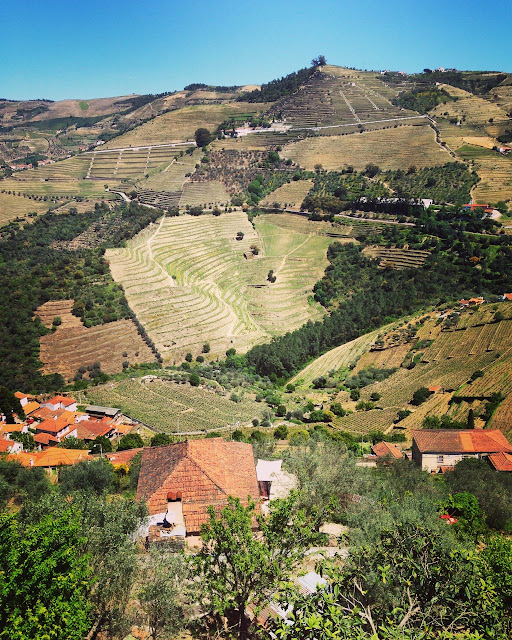 Our next stop two stops were Bellmonte, where we stayed in an old convent, and then Evora, a smallish town known for its Roman ruins and winding streets. Between the two towns we drove through old oak and cork-tree groves, most with sheep or cattle grazing underneath – a shepherd and his dog never far away. 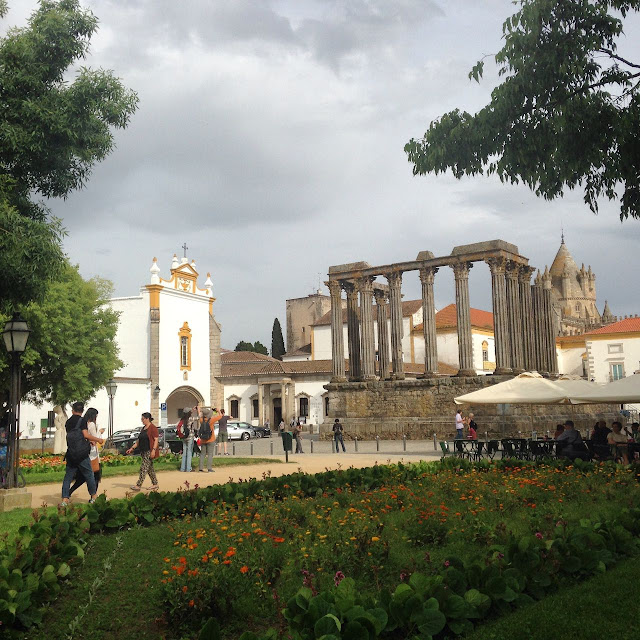 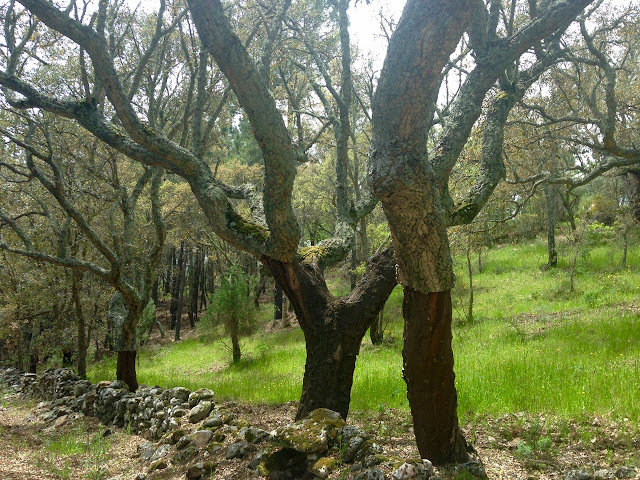 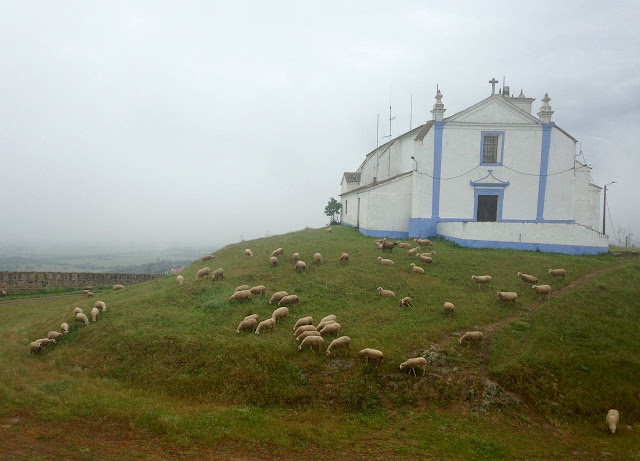 On our final day, we drove to the Lisbon airport, stopping first in the small fishing village of Setubal for a walk-around. Then it was on to Morocco (stay tuned).... 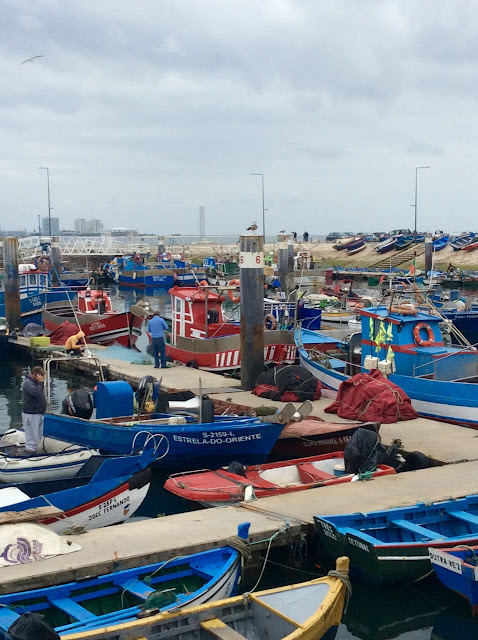 Recommendations from our time in Portugal

Portugal Trails: Tour operator specializing in organizing self-guided tours in Portugal. They booked our hotels and rental car and even provided a pre-programmed GPS, which was a brilliant addition.

1/2-day tours: We took 3 half-day tours – walking tours in Lisbon and Porto and then an arts/handicraft tour in Evora. All were great fun and a wonderful way to explore. It felt like we were just walking around the towns with a friend. On our Evora-area tour, we went to a cheese factory, a rug seller, a pottery village and a winery. Because we were interested in seeing a megalith site, our guide made a detour to the Vale de Maria do Meio for us to wander around the great dolmens.

Pasteis de Belem: While in Lisbon, we grabbed a taxi to take us to one of the oldest pastry shops in Lisbon to try the local specialty, a kind of custard tart. Similar tarts were sold at every pastry shop in Lisbon, but these were served warm with a sprinkle of cinnamon. Added bonus: our taxi driver was a fado singer (see below) and sang to us during the entire ride.

Mesa de Frades: Portugal Trails booked a dinner and fado show for us in the Alfama district of Lisbon, one of the oldest neighborhoods filled with a delightful maze of narrow streets. We balked. It sounded too touristy, but it wasn't! Dinner was excellent and after dessert, fado singers and guitarists showed up and sang to the 25 or so guests. It was in an intimate setting and was good enough that we stayed out to 1 a.m.!

Atria-te au Rio: The last night we spent in Lisbon we took a ferry over to Almada. We walked down a dark path behind a row of warehouses to a small restaurant on the river. It was worth the effort to get there as we were treated to vino verte (young wine with bubbles), chorizo with carrot jam and ink squid linguine.

Francesinha: A number of people in Lisbon insisted that we try a francesinha in Porto. When I would ask what it was, they would just kind of shrug and say it was too hard to explain, but that I really needed to try one. As it turns out, it is a kind of sandwich with a variety of meats, covered in cheese and then topped with a special tomato sauce. Think of it as a Porto Hot Brown. It was surprisingly good, especially when served with a pitcher of sangria!

Port-Tonic: We were served a glass of port at every opportunity. But it wasn't until a dry white Port was blended with tonic water that I really got on board. As soon as I can find a bottle of white port, I'm serving them at Farm Dover.

Marvao: On our drive from Bellmonte to Evora, we stopped to stretch our legs in Marvao, a small walled city with views of both Portugal and Spain. We wished we could have stayed in this enchanted town for a day or two.

The Portuguese: We were warmly greeted and treated by all the Portuguese people that we met. I found them to be a particular proud people: proud of their cities, their explorers, their castles and their specialty foods, especially their Port wines, black pork, and franczina (see above). Ed learned a handful of portuguese words which pleased them to no end. They were happy to switch over to English once he had exhausted his Portuguese vocabulary.

Poking around the farm

The farm looks great. Everything has greened up and is growing like crazy (including the weeds in our garden). Yesterday we headed across the dam to our path through the woods. Its entrance is marked by two walnut trees, growing just close enough together to forbid using the mower to cut the path. In the three weeks that we were gone, the path almost disappeared with new growth of wild hemlock, tall grasses, purple wildflowers and pokeweed. 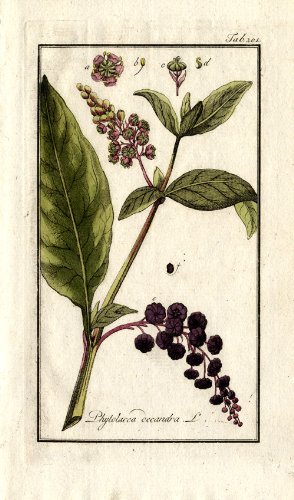 Before weed whipping the path, we harvested the leaves from the very tops of a handful of poke plants. I knew it was an edible spring green, but had never tried it before.

Once back, I did my research and determined that if I didn't boil the greens three times for 20 minutes each, I may, in fact, cause us to overdose on Vitamin A, with dire consequences. So triple boil it I did. Like spinach, the final product was much shrunk from the initial potful. Unlike spinach, it retained its bright green color. After draining it the final time, I added a bit of bacon grease, a grating of black pepper and a sprinkling of salt and served a mess of it up with our dinner.

It was tasty (bacon grease helps). It also took over an hour to prepare. If we were starving, I would certainly serve it again. Otherwise, there are lots of greens coming up in my garden that take only a minute or two to saute´.

In addition to the poke, we rounded out our dinner with our very own home-grown asparagus roasted with Parmesan and a bowl of strawberries straight from the garden for dessert. 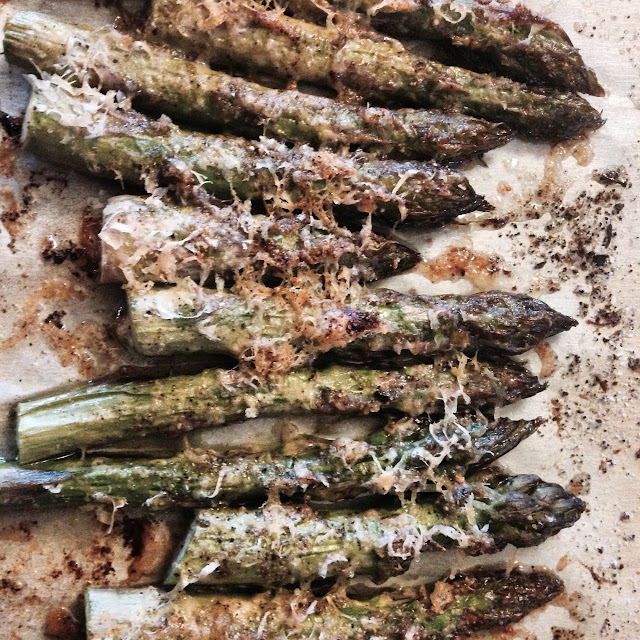 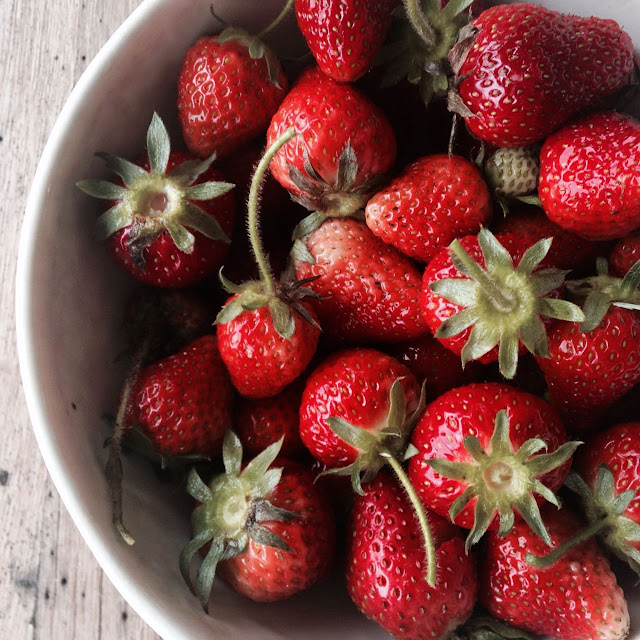 I leave you with the lyrics from "Polk Salad Annie," a 1968 song written and performed by Tony Joe White.


If some of ya'll never been down south too much


I'm gonna tell you a little bit about this


So that you'll understand what I'm talkin' about
Down there we have a plant that grows out in the woods
And in the fields looks somethin' like a turnip green
And everybody calls it polk salad, polk salad
Used to know a girl lived down there
And she'd go out in the evenings and pick her a mess of it
Carry it home and cook it for supper
'Cause that's about all they had to eat, but they did all right


Down in Louisiana, where the alligators grow so mean


There lived a girl, that I swear to the world


Made the alligators look tame
Polk salad Annie, polk salad Annie
Everybody said it was a shame
Cause her momma was a workin' on the chain gang
(A mean vicious woman)


Everyday for supper time, she'd go down by the truck patch


And pick her a mess of polk salad, and carry it home in a tow sack


Polk salad Annie, the gators got your granny
Everybody says it was a shame
Cause her momma was a workin' on the chain gang
(A wretched, spiteful, straight-razor totin' woman
Lord have Mercy, pick a mess of it)


Her daddy was lazy and no count, claimed he had a bad back


All her brothers were fit for was stealin' watermelons


Out of my truck patch
Polk salad Annie, the gators got your granny
Everybody said it was a shame
Cause her momma was a workin' on the chain gang
(Sock a little polk salad to me, you know I need me a mess of it)

A mind that is stretched by new experiences can never go back to its old dimensions.
– Oliver Wendell Holmes

Our plane touched down last night at dusk. We were home (well, 40 minutes from home) from 22 days of exploring the sights and sounds of Portugal and Morocco.

It was a grand adventure, made all the more grand when we pulled in our drive, swung open the red cattle gate, and made our way slowly up the gravel road – grateful for our time away; grateful for our return home. (And especially grateful that Philip, married to niece Amy, had mowed just two days prior to our return.) 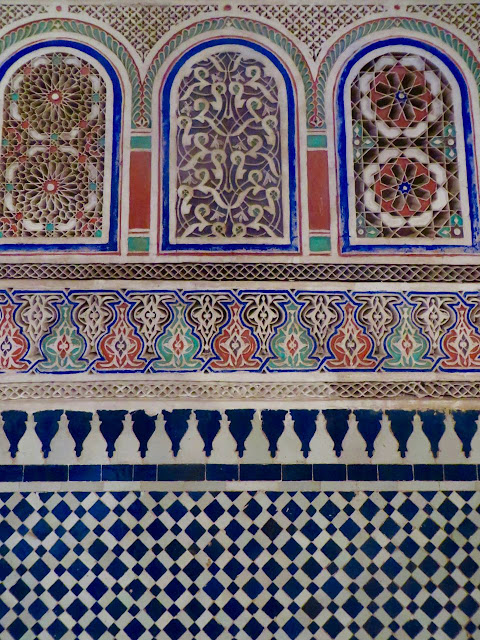 I've so much to tell you, but as usual upon return from travels, first I need to tend to re-entry chores. Give me a day or two and I'll recount the highlights of our trip.


Posted by Debbie Galloway at 8:25 AM No comments: