I've been thinking about how to tell you about our trip to China. I'm stumped, as this trip has changed me in ways I won't be able to articulate for a long time. It's something about the way I now view the world and the people on the other side of it. Something about a clearer understanding of how history impacts our lives today. Something about moving out of my comfort zone to try new things, to go new places, to experience different cultures. And something about what it means to be a family. I can't yet describe to you what changed for me 8000 miles away from Farm Dover, because I don't yet understand it myself.

So, please be patient with me as I try sort this all out. In the meantime, I thought I'd share some trip highlights. It really was an incredible trip.

The idea for a trip to China happened last August when Jack announced that he was moving to Shenzhen, China for a year to teach English and American Culture to Chinese high schoolers who dream of coming to the United States for college. Ed and I wanted to visit Jack, but wanted to wait until he had set down roots in his new place. It took a while to figure out where we wanted to go and to determine logistics of a trip to a faraway country where we could neither speak the language nor read it.

On March 9, we flew to Hong Kong, which is the city just south of Jack's Shenzhen. While Jack worked during the day, we explored the city on our own from the old Wan Chai neighborhood to the markets on Kowloon Peninsula to a flower show at Victoria Park. Jack came over to meet us for dinner on our second night and then came back the next day for an afternoon visit to the Big Buddha on Lantau Island, followed by dinner at at the Jumbo Floating Restaurant in Aberdeen.

On day 4, with clear instructions from Jack, we made our way to last stop on the Hong Kong train, disembarked, cleared Customs inspection, and grabbed a taxi for our hotel in Shenzhen. After class was out, Jack met up with us and showed us around his city of a mere 14 million people. We ended up at Dafen Village, an artist community where we wandered around watching calligraphers, carvers, and painters producing their works of art.

During our time in Shenzhen, we met Jack's students, experienced a family reflexology session (foot massage), toured around the town with a friend of Jack's (while Jack worked) and then met Jack and a group of his friends for dinner.


After two days in Shenzhen, we said goodbye to Jack and flew to Guilin, on the Li River in northern Guangxi (south central China). We were met by Ricky, our guide from WildChina, and our driver, Mr. Chin, who drove us to Longsheng, a small mountain village famous for its rice terraces. Our time in the Guilin area included a boat trip down the Li River, affording us great views of the Karst landscape.


After gettting off the boat, we strolled in Fuli Town, stopping for lunch and to tour a family-run paper fan workshop. 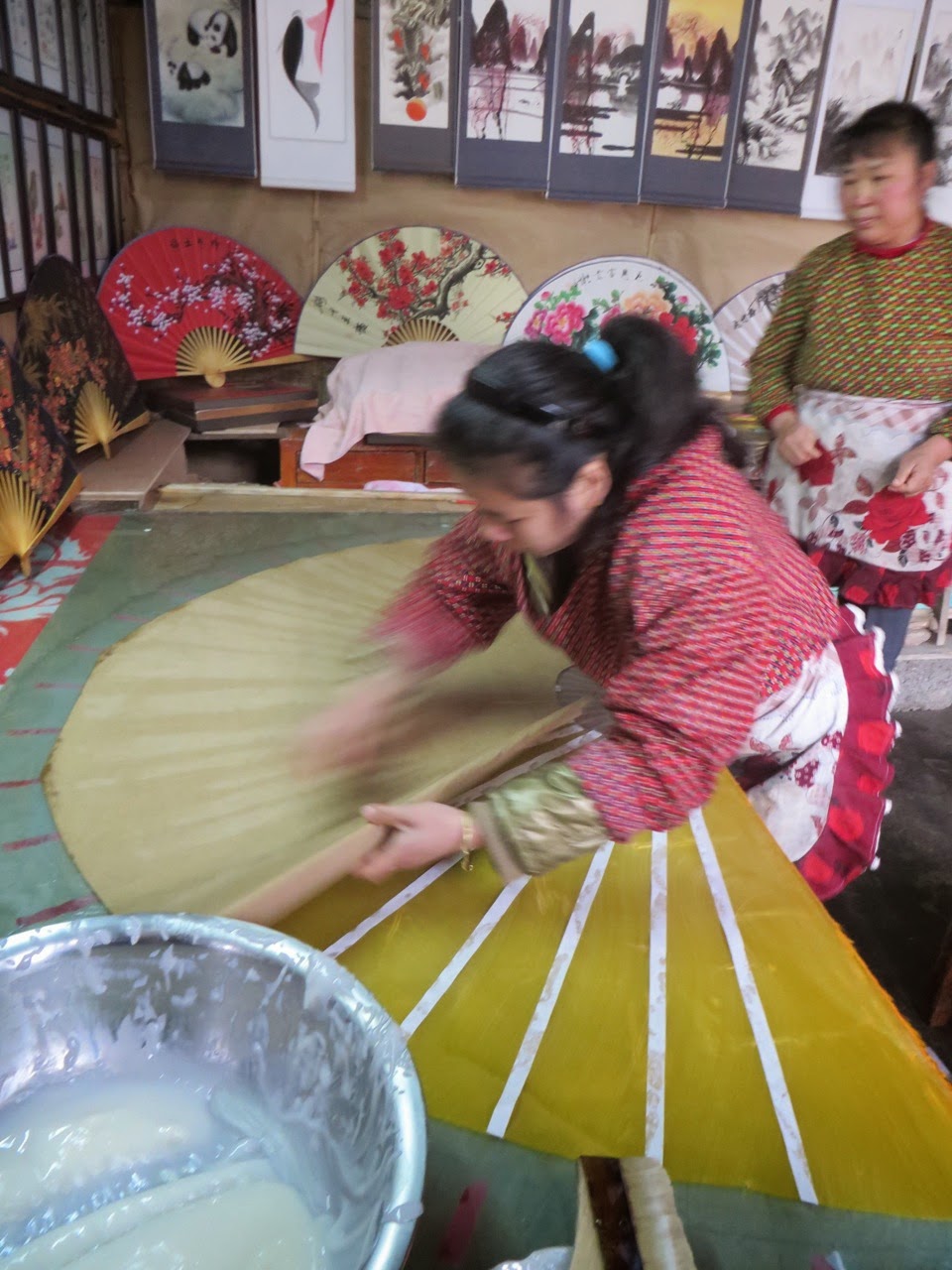 Then we were off to Yangshuo, where at dusk, we watched a fisherman partner with a cormorant to catch small fish.  We even gave it a try ourselves. (I think I'll stick to bass fishing.)


The next morning we hiked to the top of Moon Hill, which I'm pretty sure was really a mountain. We were so proud of ourselves, until we saw a little elderly woman round the last bend at a fair clip. She climbs up every day carrying a cooler full of cold bottled water to sell to the thirsty tourists.


Our time was up in Yangshuo. We were off to Kumming in Yunnan Province, where our tour guide did NOT meet us at the airport. (Just a small mixup, which eventually was rectified by a man showing up, unable to speak a word of English, but who managed to get us in the backseat of his car, where he drove like a manic, then pulled over on the side of the expressway, where another man, who also did not speak any English, put us in the back of his van and drove us 4+ hours to a dark alley and made us get out with our luggage and start walking. I was certain an untimely and gruesome death awaited us. Instead, we eventually found our way to the delightful Windoo hotel on the Erhai Lake.)

Yes, Ed and I are back from our epic trip to China. We got back about 1:30 a.m. and are seriously jet-lagged.  I'm sure it will take a few days for us to get back on a Shelbyville schedule. But, in the meantime, I wanted to let you know that we are grateful for our travels half-way around the world, for our visit with Jack, and to wake up this morning at Farm Dover.

I'm looking hard for signs of spring around here – and I'm not finding many. Everything still looks awfully beige, and muddy. I'm desperate for something green, something fresh, something tender.

On my walk this morning, I crossed Dover Road and searched among the wet, brown leaves for signs of tiny grape hyacinths or the first push of daffodils. But nothing.

I hopped over the creek and followed it for a bit, looking for green cress or maybe some ramps. But nothing.

Along the banks I searched for the earliest wildflowers: snowdrops, bluebells, trout lilies or wood violets. Nothing.

I headed back in to report to Ed that spring evidently just wasn't coming to Farm Dover. But there, in my kitchen, spring had sprung. Right in front of my eyes were beautiful fruit blossoms. You see, a couple of weeks ago I pruned our orchard trees and rather than composting the cut branches, I brought them in and placed them in a huge pitcher filled with warm water. This morning, they decided to burst into bloom. I don't know if they are apple blossoms, pear blossoms, or peach blossoms. I don't care. They are beautiful. A sure sign of spring. Desperation over. 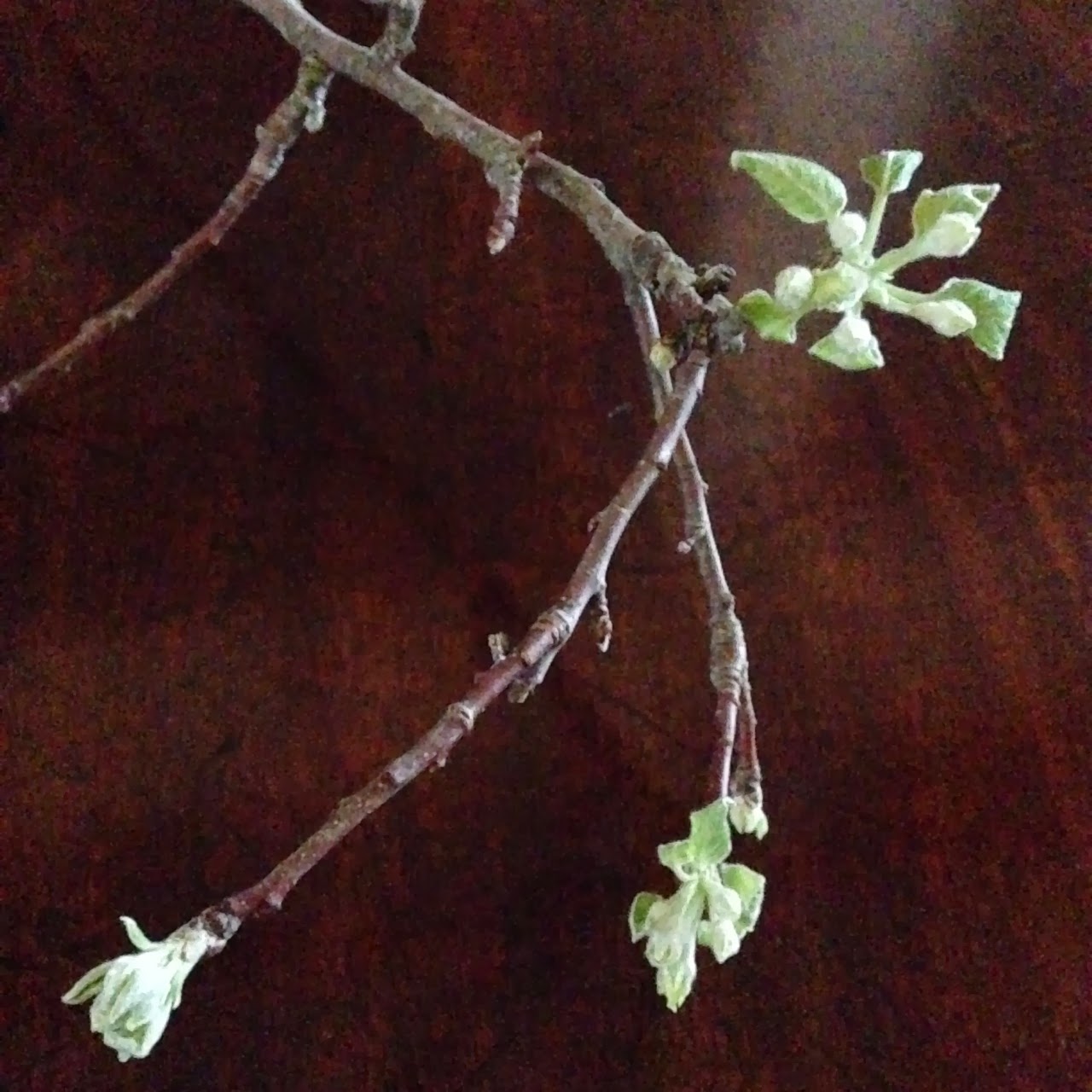 Posted by Debbie Galloway at 7:05 PM No comments:

Scrape away the snow, pluck away the frozen brown leaves, and there they are. The first blooms of a Lenten Rose. Making an appearance on Shrove Tuesday, as if on cue for tomorrow's start of the Lenten season. 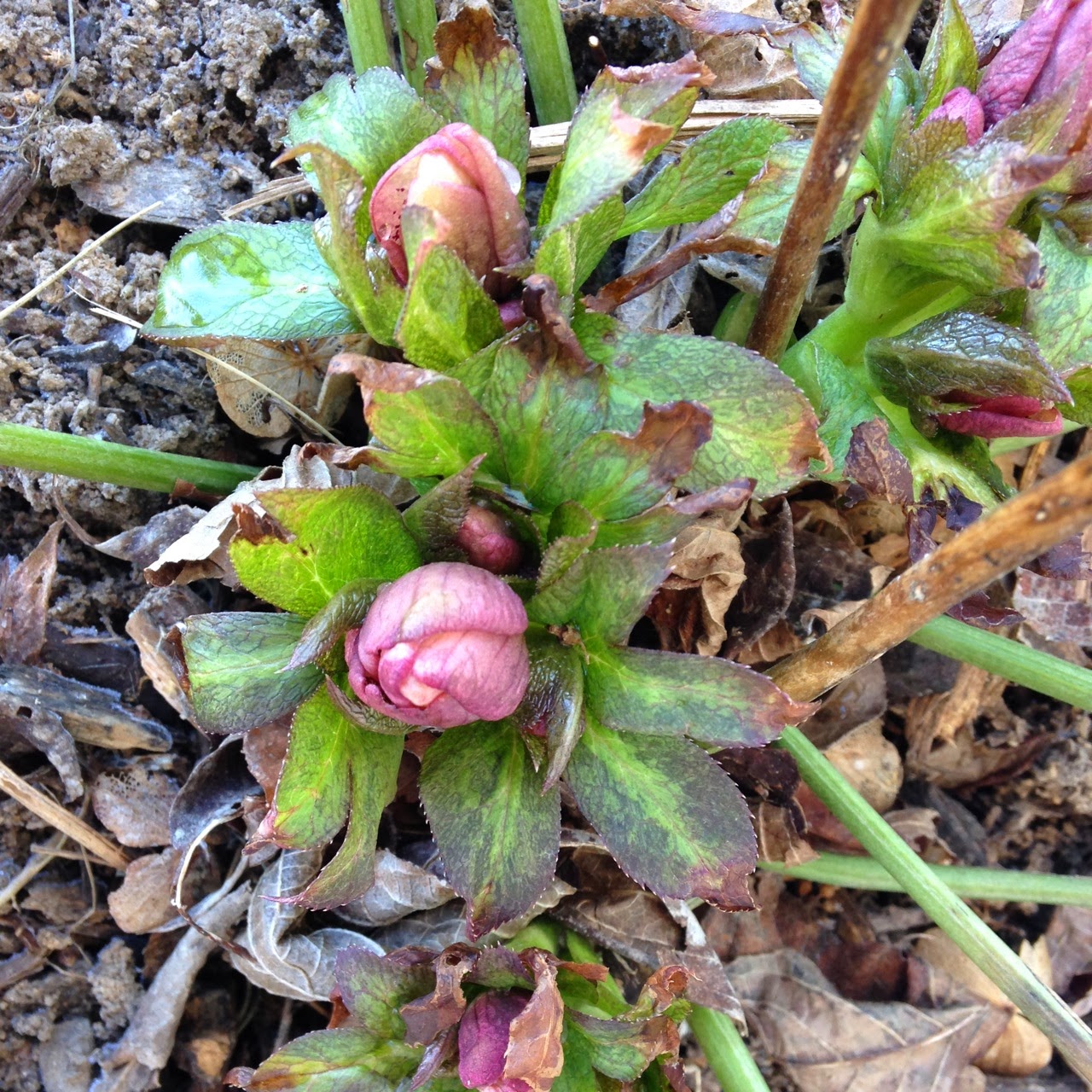 The garden awakes to this spiritual time with these charming hellebores. 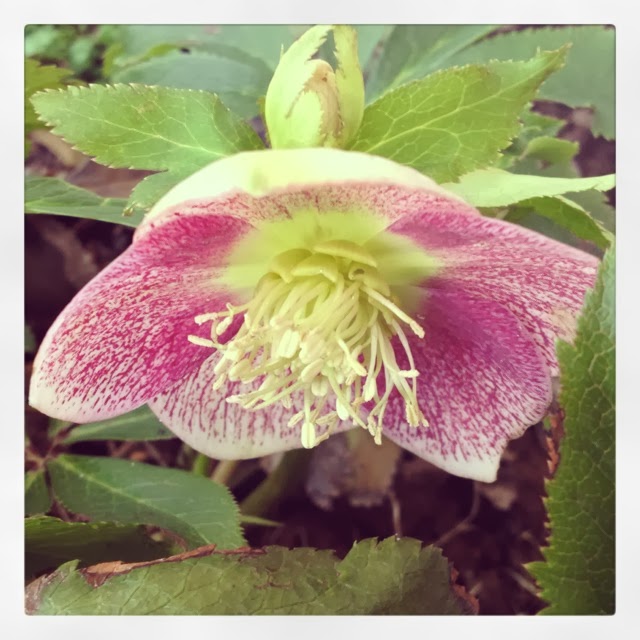 Posted by Debbie Galloway at 8:49 PM No comments:

Why did the opossum cross the driveway?

To get her photo taken, of course!


Posted by Debbie Galloway at 11:02 AM No comments: