Pretty as a Picture

Farm Dover is surrounded on all sides by working farms. This suits us just fine. Not a neighbor's house in sight. Usually it is quite quiet around here. But today, we heard a disel tractor working in the fields to the right of our house.

Up and down the fields it traveled. The fields had been cut for hay on Friday and left to dry before being raked into long narrow files (windrows). Today, the tractor with its baler, rolled the hay into big round bales. I walked the drive tonight and was struck by how much the fields looked like a Monet painting. The bales were just a bit more rounded.


But the light was the same. The soft evening light throwing long shadows on the fields. See what I mean: 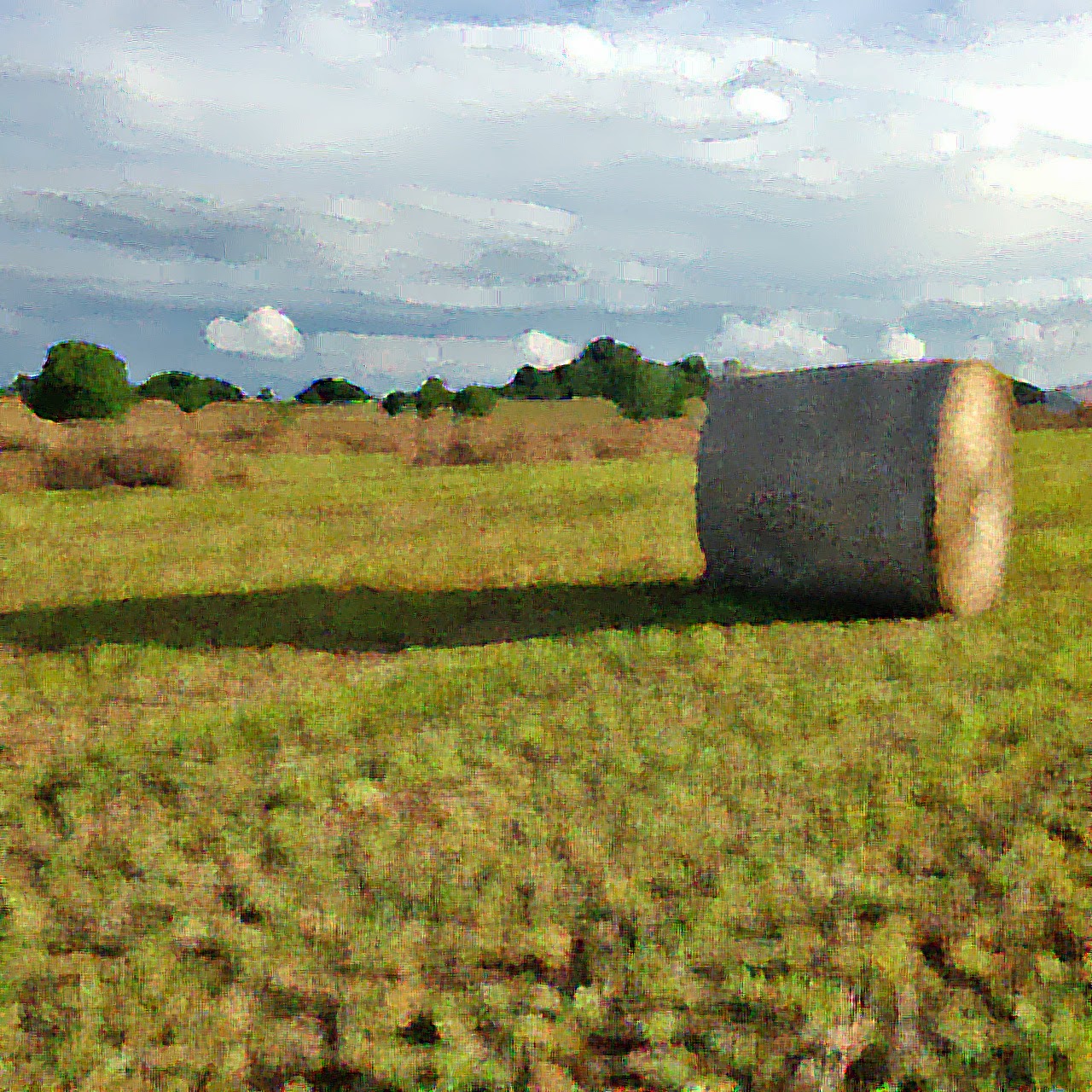 It was pretty as a picture.


Posted by Debbie Galloway at 9:47 PM No comments:

I am. At myself. Because I made a Jell-O dessert. Technically, it was not a brand name Jell-O® dessert; it was a gelatin dessert.

I have always made fun of Jell-O desserts (or salads). They always seemed so, so ridiculous. So, wobbly. Aunt Gladys made something called "fluffy duff" that I think had Jell-O in it (as well as minature marshmallows) and my mom made an instant Jell-O, which she gussied up with a can of Del Monte Fruit Cocktail. When we were sick she would make us red or green instant Jell-O (or a "sick egg"–which is a story for another time). Once, I designed a logo for a client and they unveiled the logo to their customers at a luncheon by serving Jell-O with the logo embedded in it -- can't remember what they made the logo shape out of. As you can tell, I just don't have all that many great memories of Jell-O.

Until now. I recently was on a re-reading-Laurie-Colwin-kick and she had a chapter in More Home Cooking entitled: Desserts That Quiver. In the essay, Ms. Colwin talks about making Honeycomb Mould: a three-layered dessert worthy of dinner-party status. She uses a recipe by Jane Grigson, a British cookbook writer, who describes the lemony gelatin dessert this way:

"The dessert will have a cap of clear lemon jelly, then a thick band of opague cream jelly shading off a honeycombed spongy base which makes a slight crinkling noise as it's eaten." Yes, it does crinkle a bit. It is fresh. And summery. And lemony. And delicious.

I was planning to add a bit of whipped cream or maybe some of the last stawberries of the season, but instead I served it without garnish. It was lovely. And very grown up. 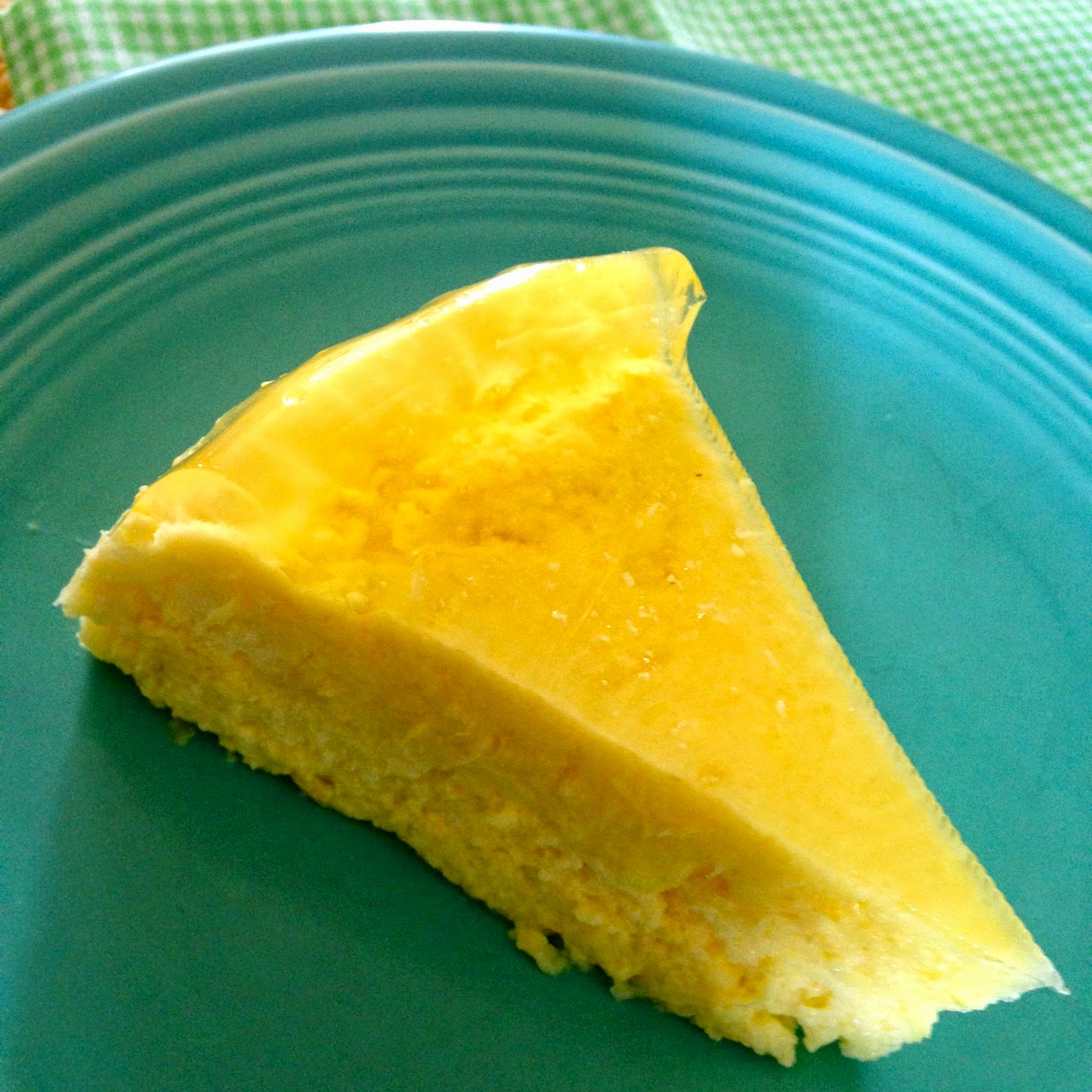 I made it in one of my mother's copper moulds. She has a dozen or so, that still hang in the kitchen at my parents' house. I can't decide if I want more of them, or if the one I have is sufficient. I guess I have to decide if this Jell-O thing in a passing fancy or my go-to dessert for years to come. 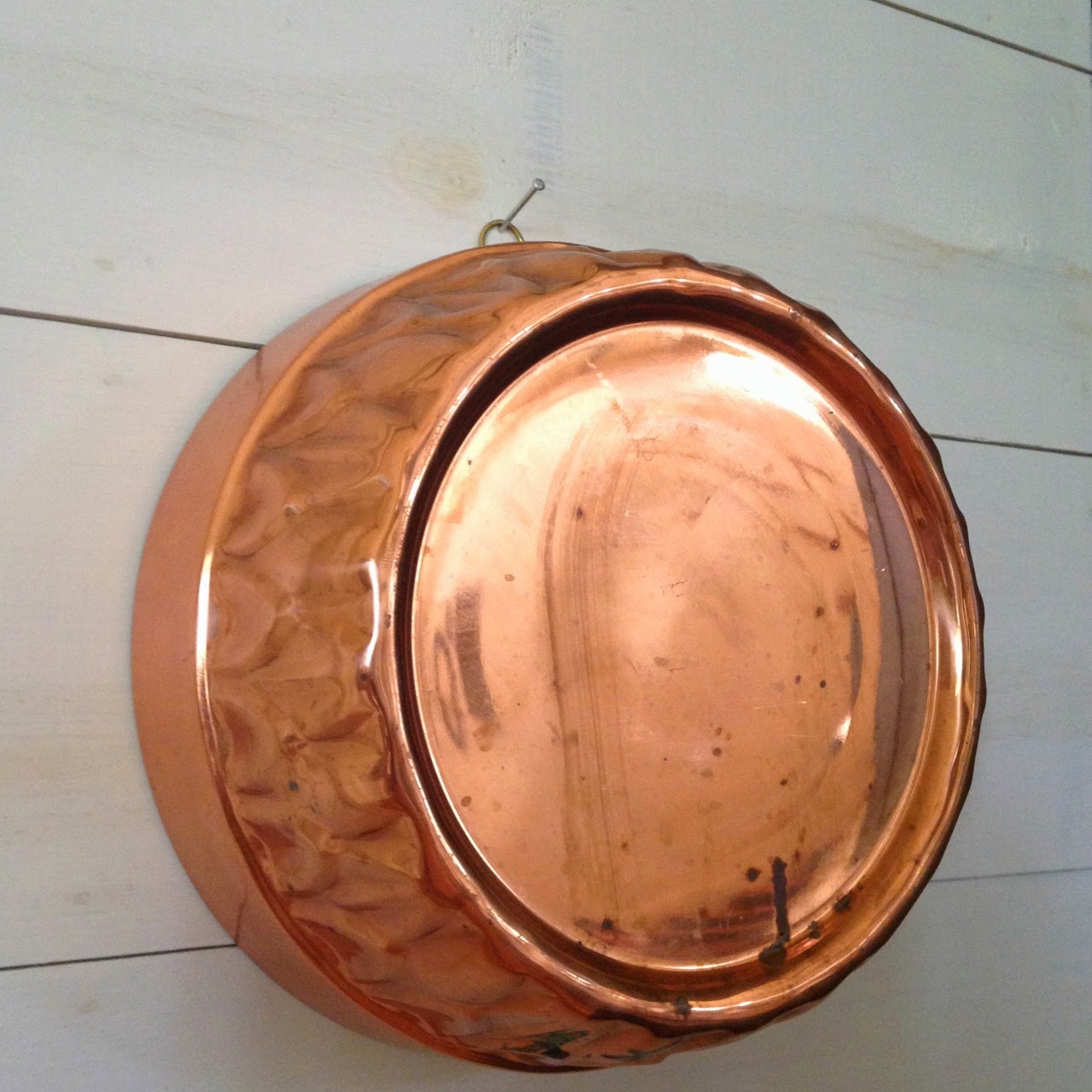 preparation
In a 2-quart heavy saucepan, whisk together the egg yolks, lemon zest, gelatin, sugar and cream. Place the saucepan over medium-low heat and warm gently. Meanwhile, warm the milk in the microwave or in another saucepan until it is hot but not boiling. Whisk into the egg yolk mixture.

Cook the egg yolk and milk mixture for 5 to 10 minutes over medium-low heat, whisking frequently. Heat the custard until it reaches a temperature between 170° and 180°F — don't let it boil or go over 185°F! The custard should coat the back of a spoon.  When it reaches this point, set it aside for 5 minutes to cool. Stir in the lemon juice.

Using a stand mixer or hand beaters, beat the egg whites until they hld stiff peaks. When they make stiff peaks that stand straight up, slowly pour the hot custard into the bowl and fold everything together with a large spatula. Let the mixture sit for a few minutes.

Divide the mixture among 8 small glasses or wineglasses, or pour it into a medium-sized bowl (spray it lightly first with cooking spray). Cover the dishes and refrigerate for at least 2 hours for small glasses, and overnight for a full bowl. Top with a touch of whipped cream.


To unmould the large mould, run a thin knife around the edge, dip the mould quickly into hot water and invert it onto a plate. Serves 8.

Posted by Debbie Galloway at 1:48 PM No comments: 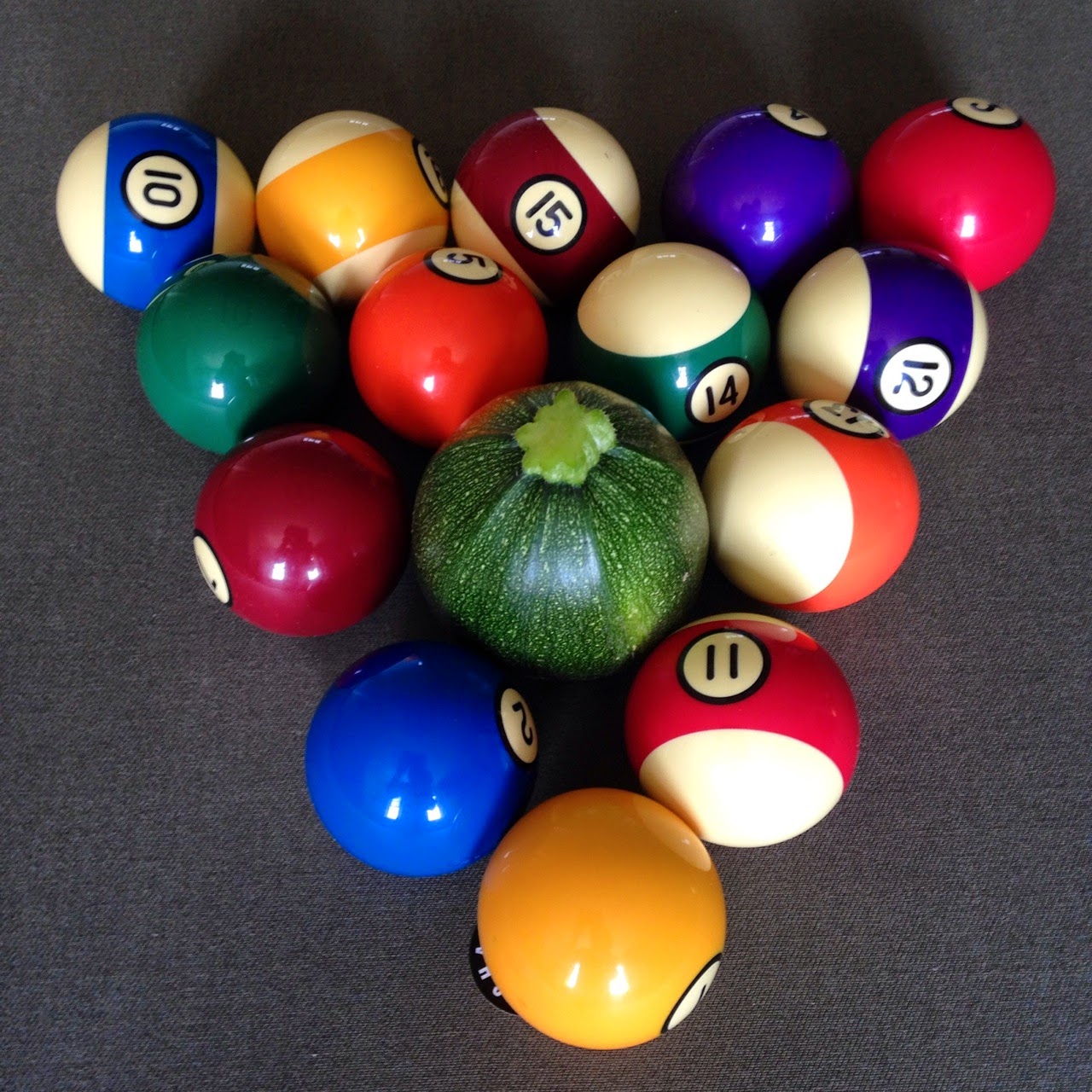 Posted by Debbie Galloway at 12:42 PM No comments:

Find yourself a big old crock

Gotta love a recipe that starts out: Find yourself a big old crock. That's what I did today. I found myself a big old crock and I made myself some elderflower cordial. At least I started making it. It needs to infuse for three to five days before it is ready to bottle. 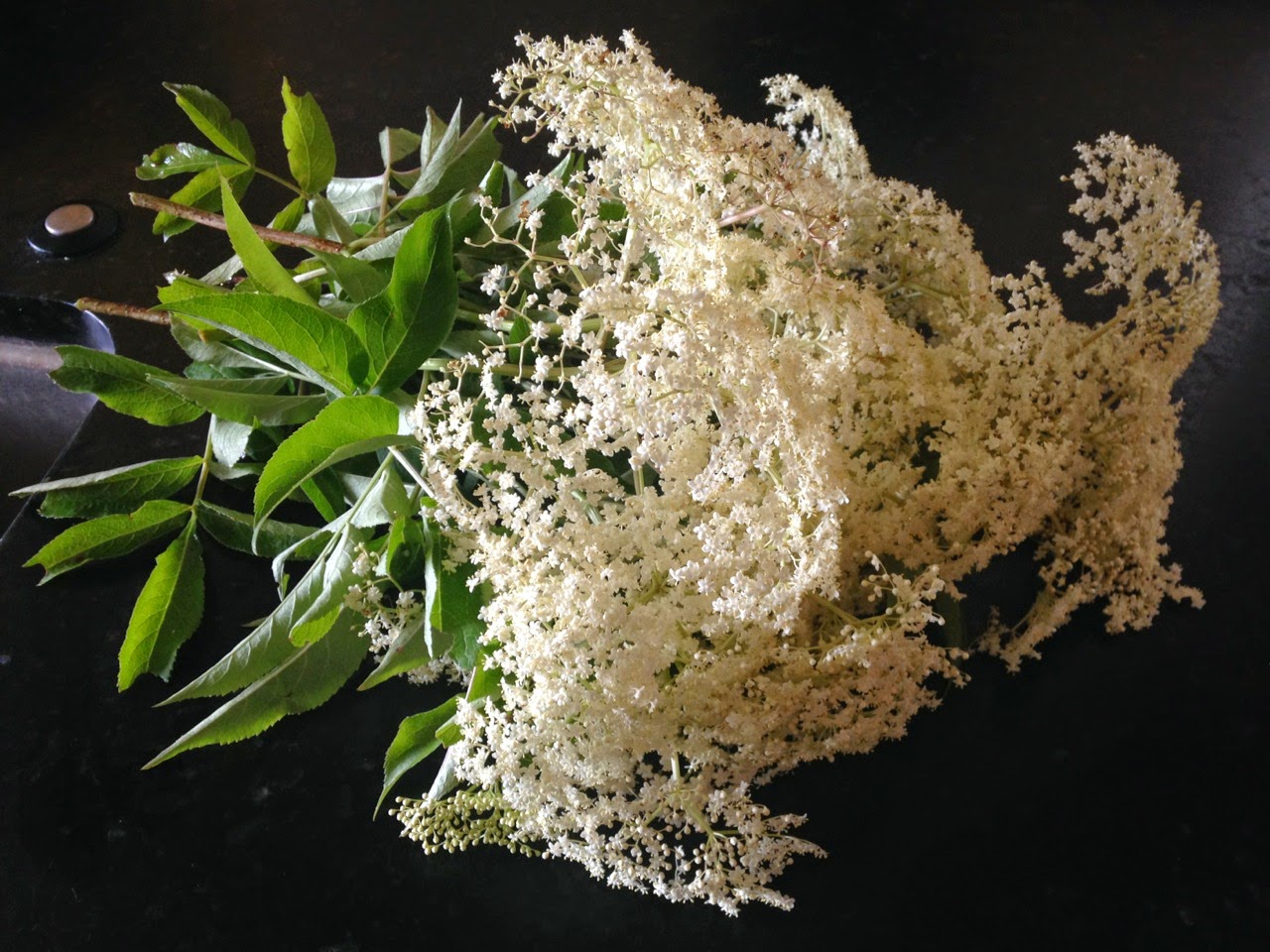 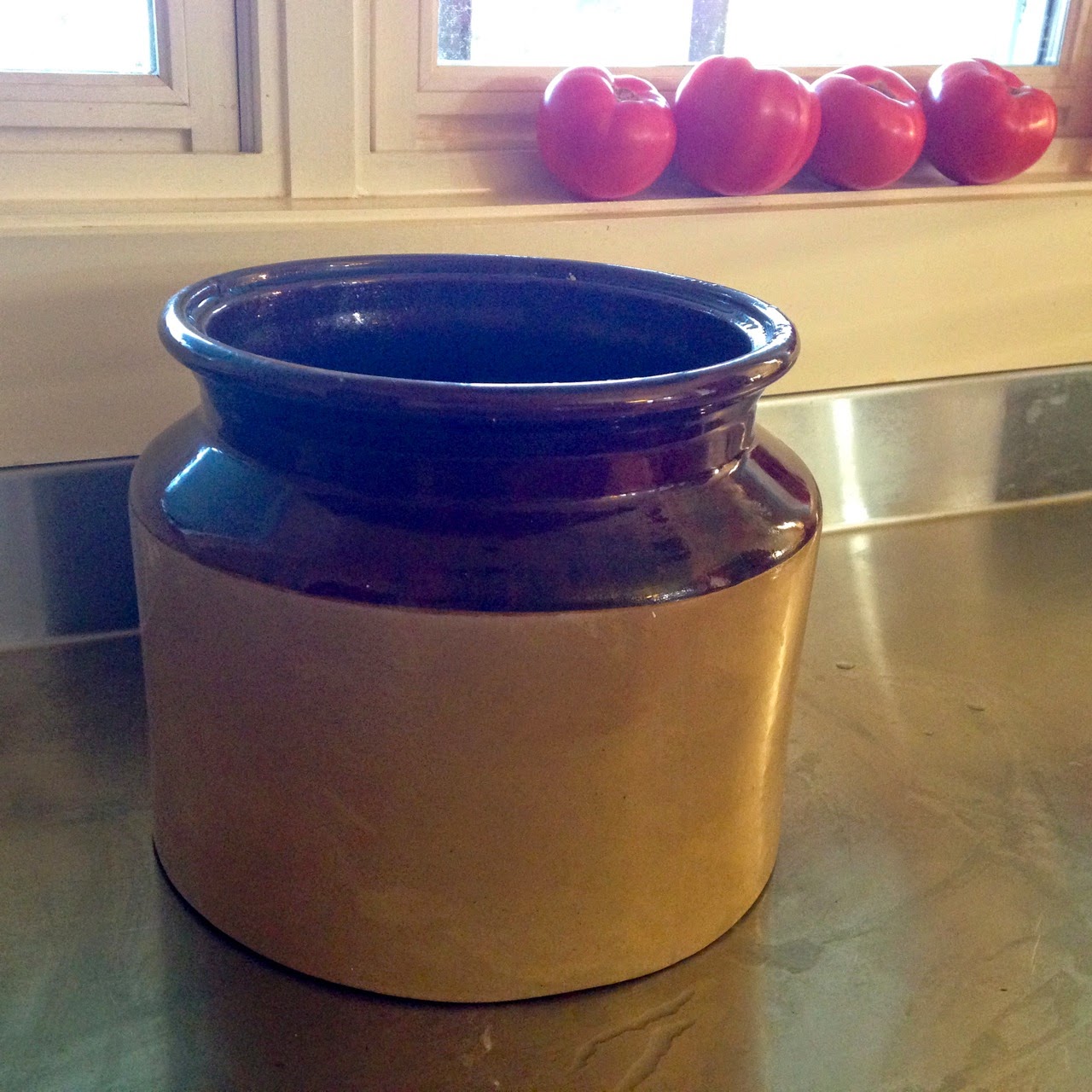 I used the crock that my mom used to use for our Christmas eggnog. I had borrowed it last Christmas and tried to replicate the egg nog recipe that mom's friend Jean Cullen used to make for us every Christmas. The crock has been sitting in my pantry for months, just waiting for a recipe that calls for "a big old crock." 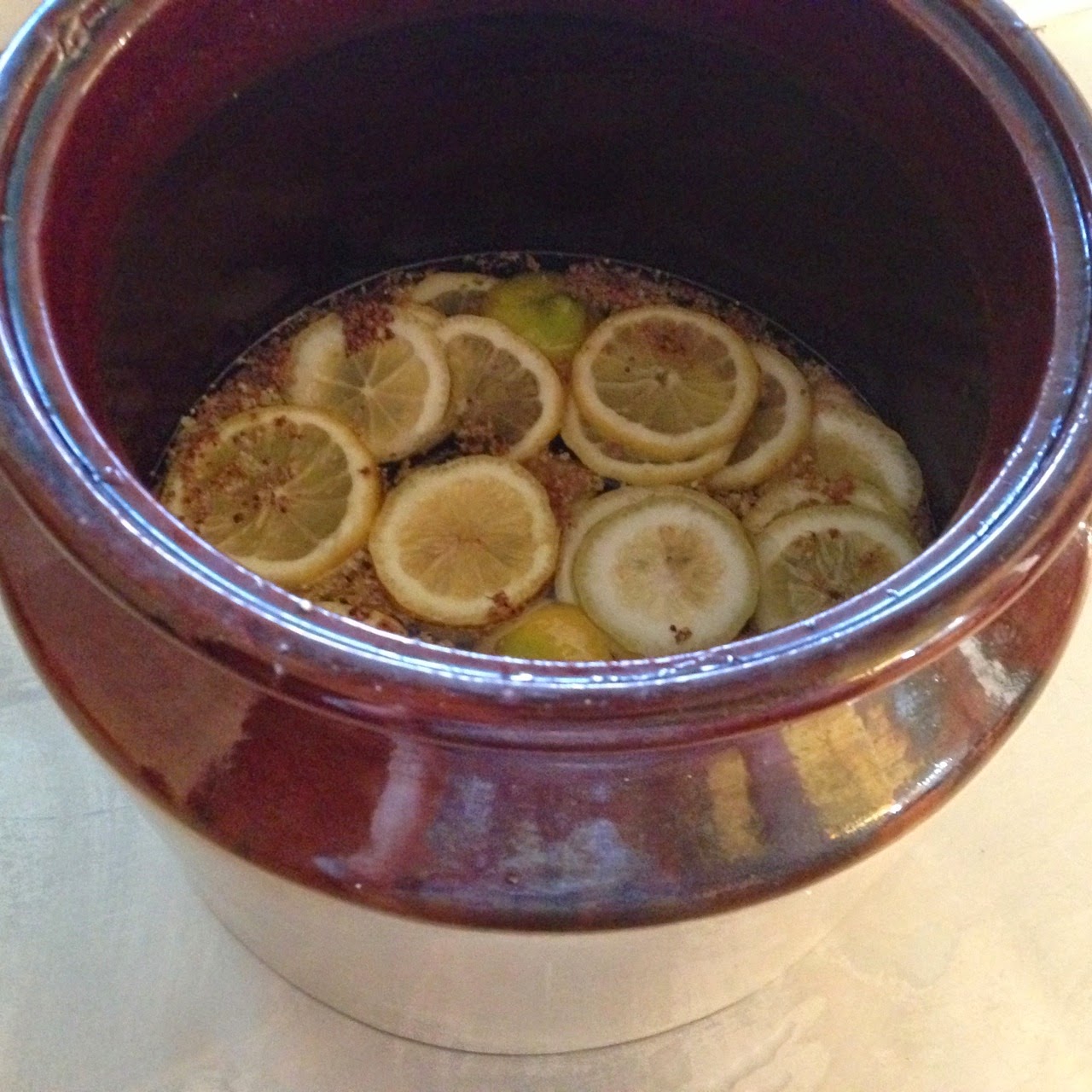 Posted by Debbie Galloway at 8:41 PM No comments:

I was out cutting invasive osage orange trees with Ed when my phone rang. It was our neighbor, Sandy, calling to welcome me home from my recent trip. When I told her what we were up to, she asked if we could collect a baggie full of sawdust. I told her I would try -- as I watched the sawdust blow away as Ed chainsawed the tree trunk.

After lunch I went back into the woods, armed with a whisk broom and dustpan and manged to collect the requested sawdust. I couldn't image what Sandy was going to do with the pulverized wood, but I was happy to comply with her strange request. 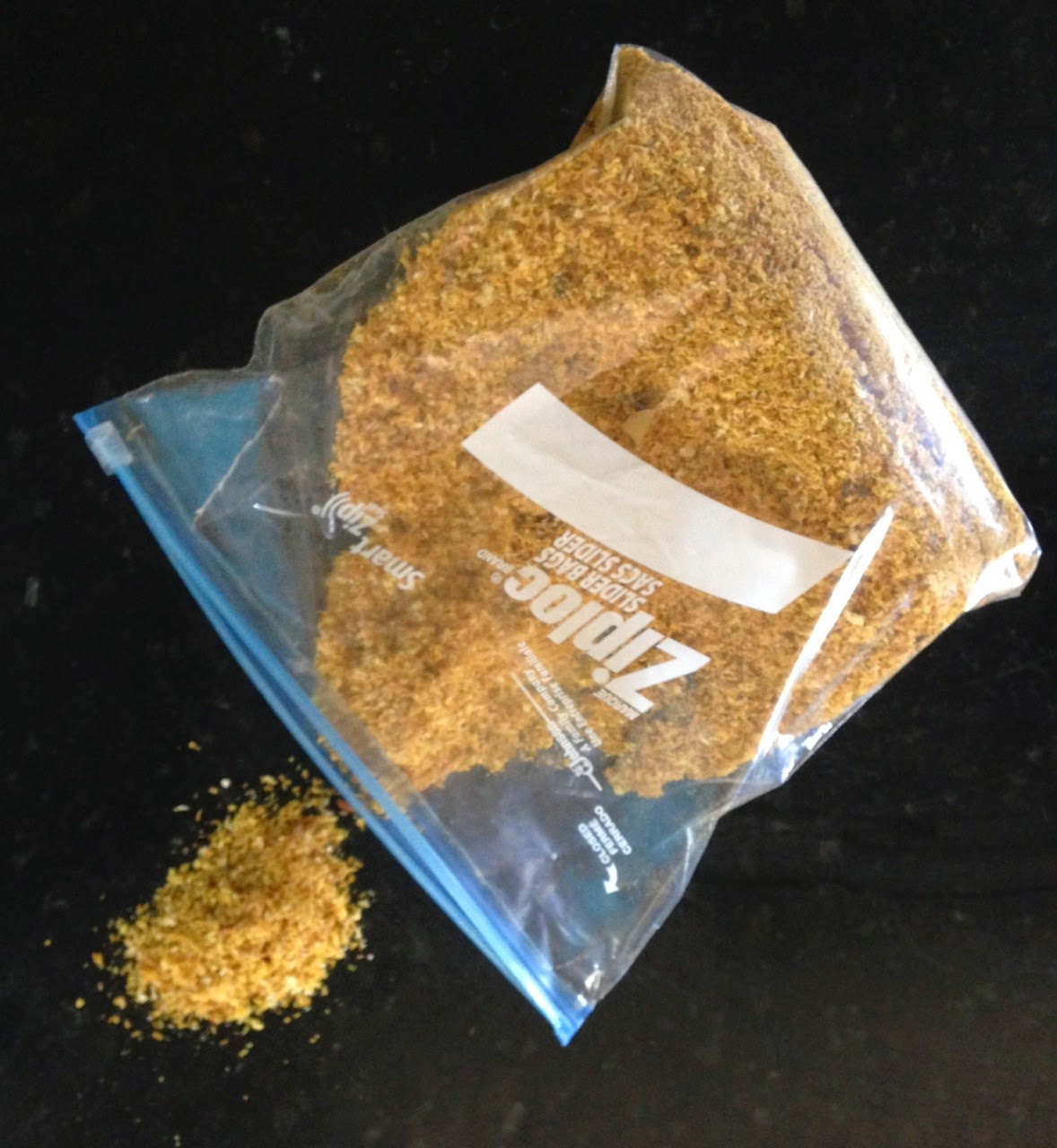 Turns out, she wants to make a natural dye from it. Sandy is, among other things, a talented fiber artist. Last summer she used the yellow coreopsis growing in our fields to make a dye. The resulting dyed wool was beautiful -- so beautiful, that she entered it in a fiber contest and won. The prize was a bag full of cochineal (insects) that are used to make a crimson-colored dye.

Just last week Sandy sent me this photo of yarn that she dyed using winter wheat from our front field. 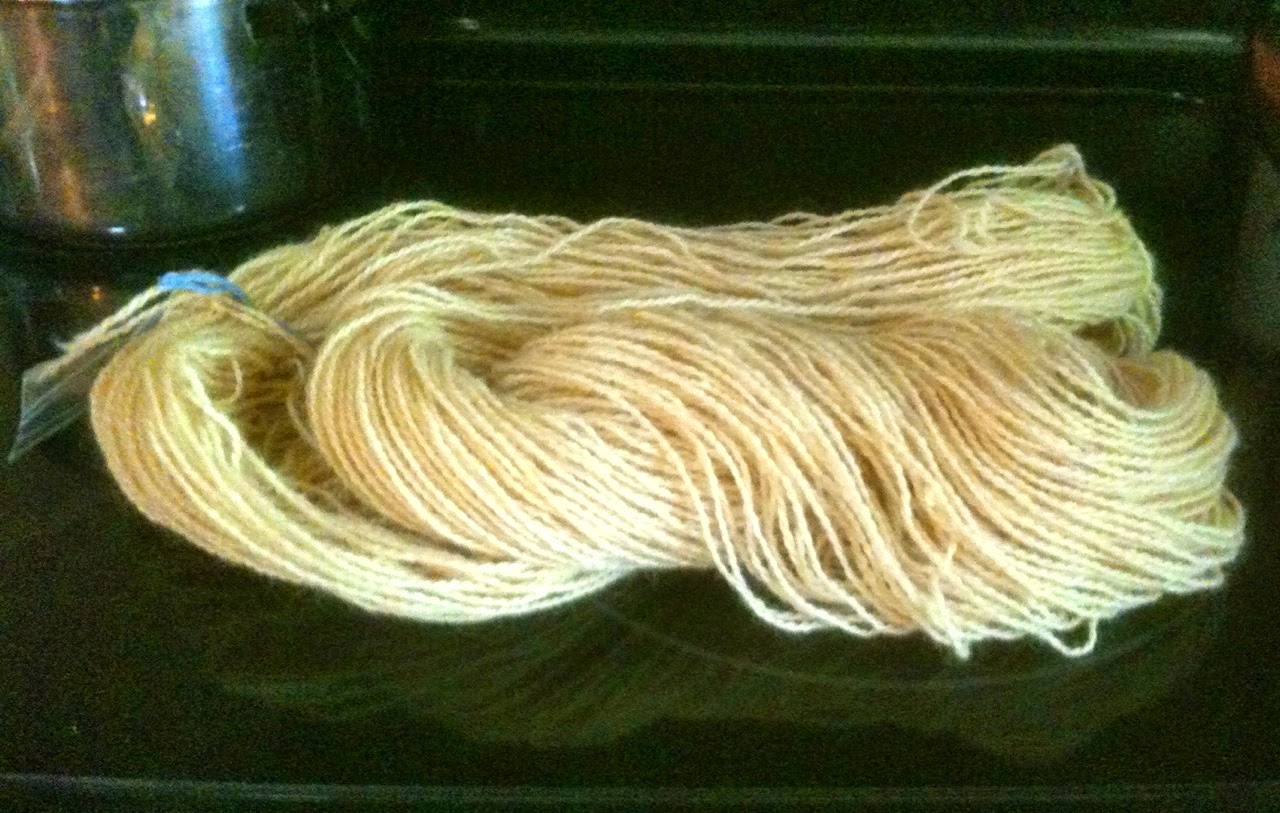 Can't wait to see what she comes up with using the sawdust. Makes me happy to recycle it into such a creative project.


Posted by Debbie Galloway at 8:06 PM No comments:

The cutest thing ever

While I was away last week, the nest of orchard orioles in one of the maple trees along the drive hatched. The baby birds grow up so quickly. Today, I found one scared-to-death baby oriole hanging on to the outside of its pouchlike nest, too afraid to let go and fly. I know the feeling. 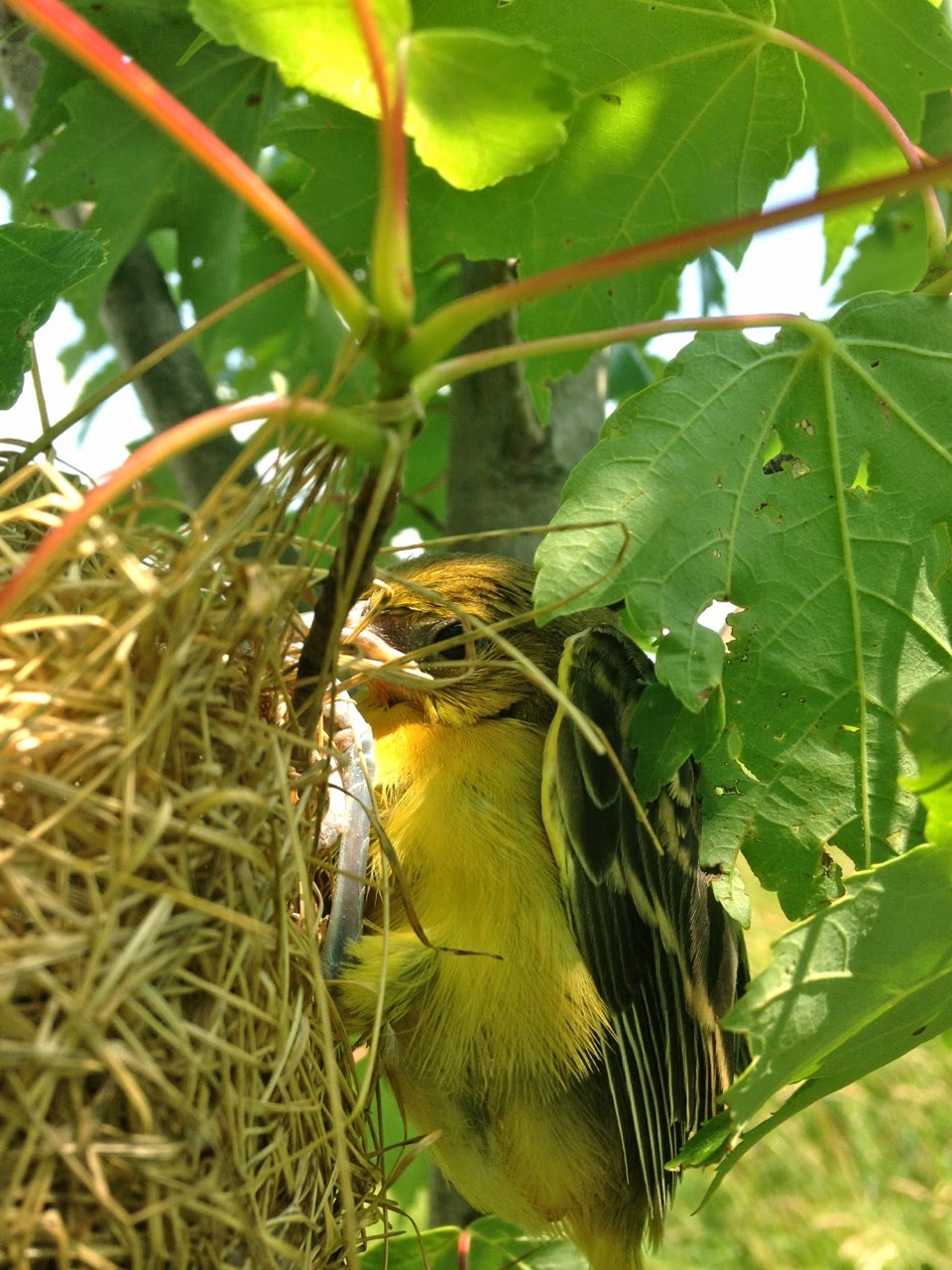 Posted by Debbie Galloway at 11:30 AM No comments:

Cool drink on a hot day

As a followup to my last post about elderflowers, Ed and I enjoyed a cool drink of elderflower limeade yesterday: the perfect antidote to a hot day spent in the garden and out in the fields. 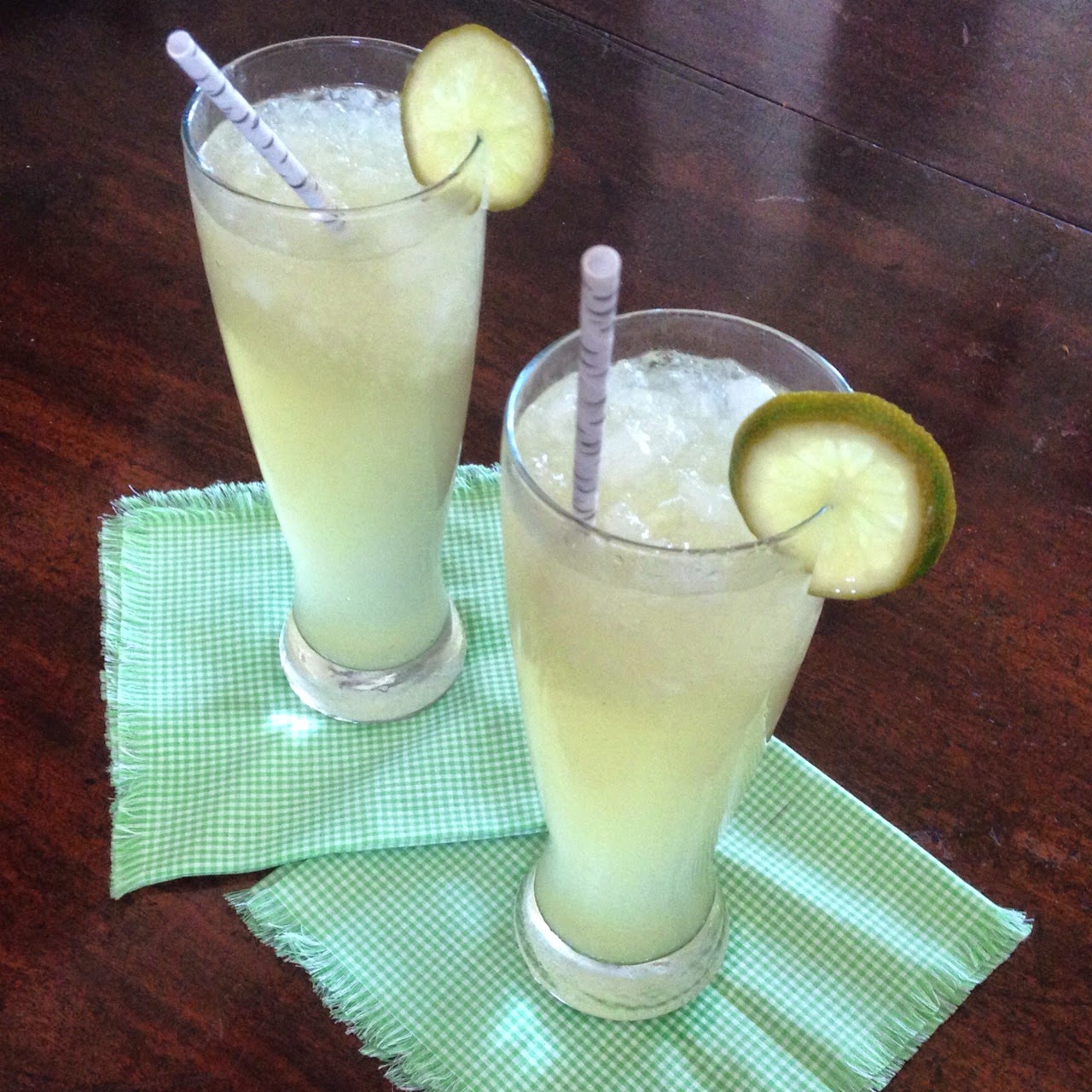 Posted by Debbie Galloway at 11:24 AM No comments:

When life gives you elderflowers...

We have some beautiful bushes scattered about the farm that boast white blossoms comprised of hundreds of star-shaped cream flowers. Ben, from the Kentucky Forestry Division, came out to Farm Dover a month ago and walked around with us, offering advice about our trees. I asked him about the mystery bush and he identified it as an elderberry bush.

Armed with that ID, I started coming across dozens of recipes for elderberries and elderflowers. It obviously is now on my radar. 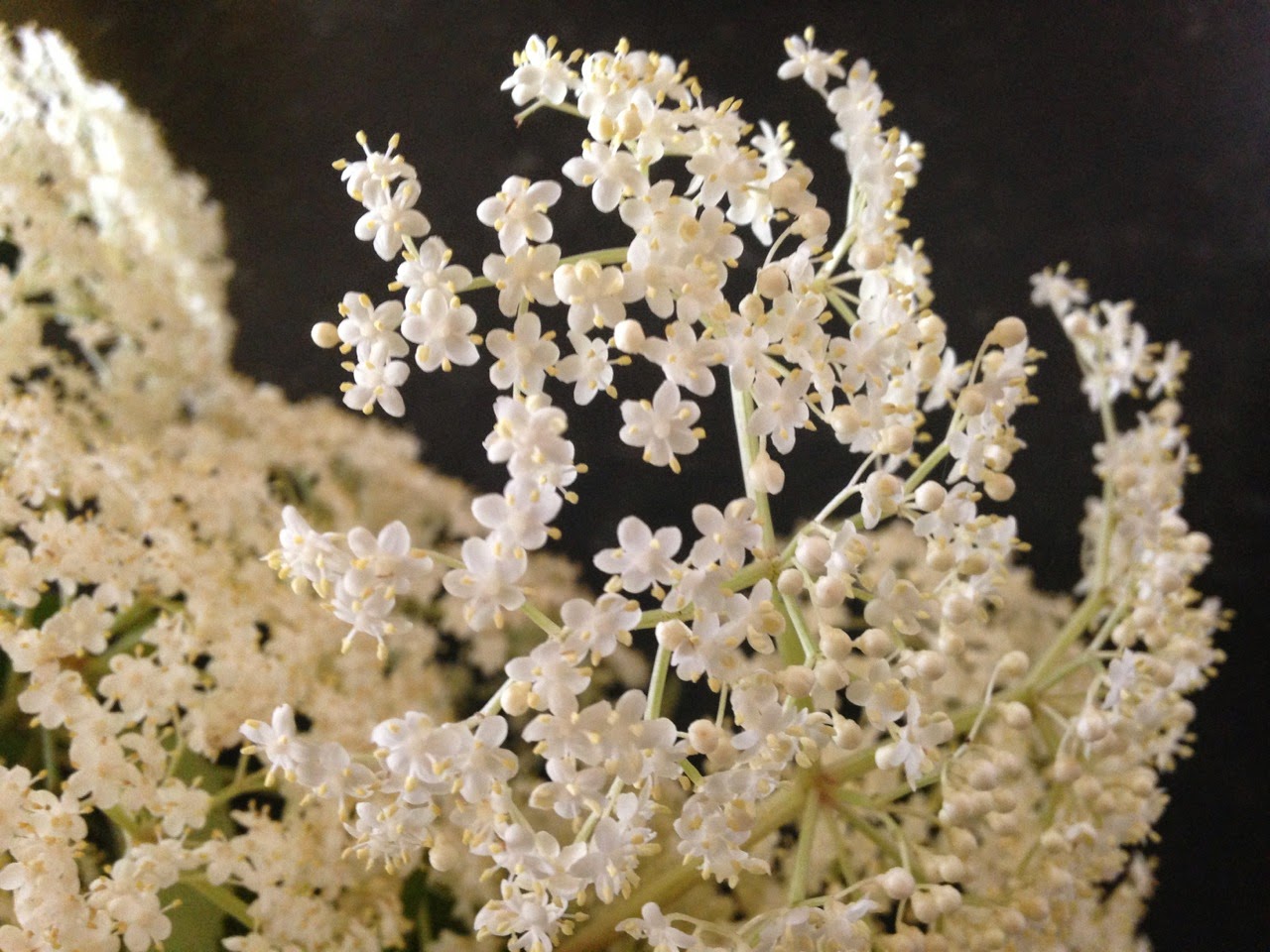 The concoction is now sitting for a couple of days on my kitchen counter, to allow the elderflowers to infuse the lemonade with their sweet perfume. It is supposed to be hot all this week. I'm planning to lead Ed down a secret path to the forest table (the one the squirrel ate) to enjoy a cool glass of elderflower lemonade. Sounds nice, don't you think? 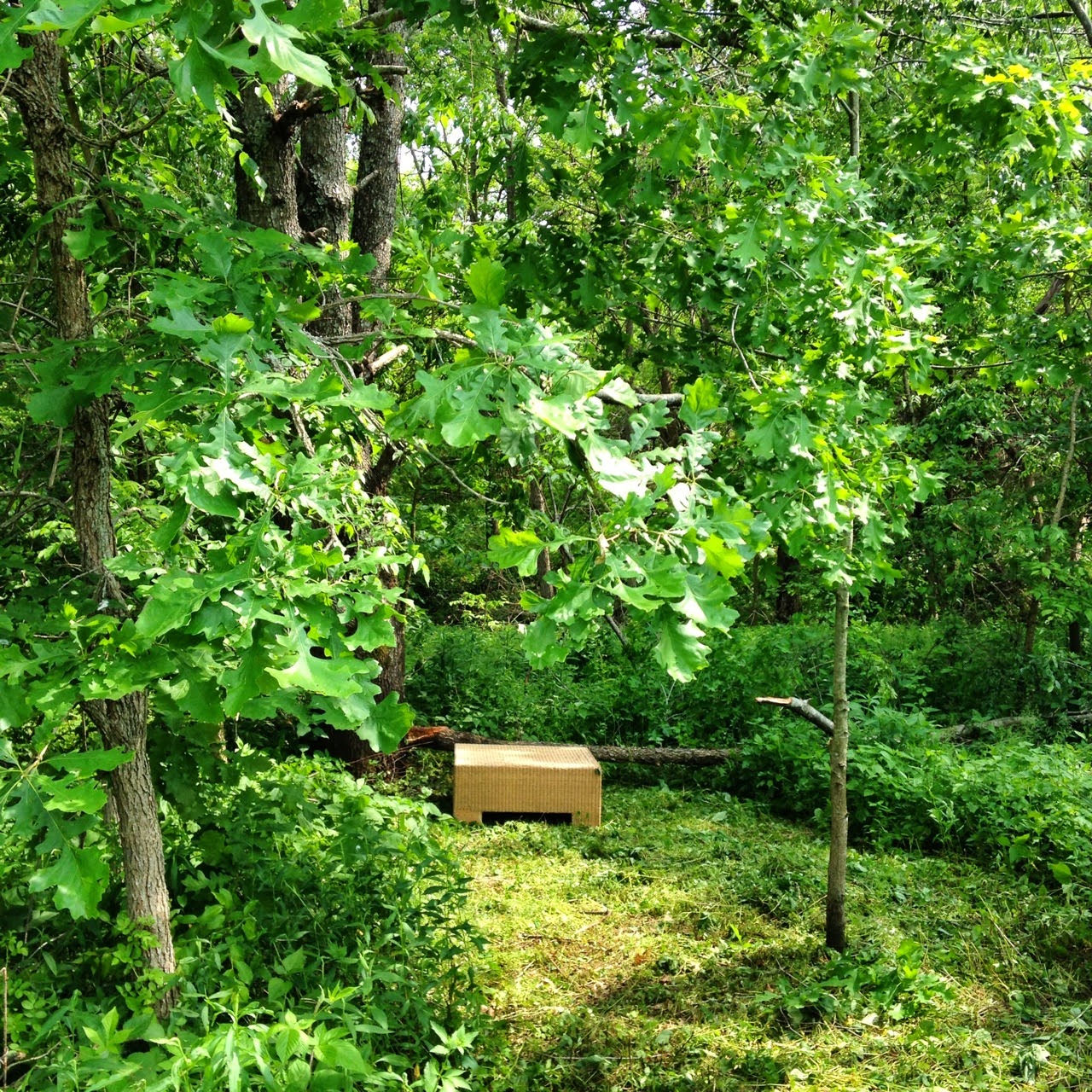 Posted by Debbie Galloway at 6:46 PM No comments:

I've been documenting the harvest from Farm Dover this year. I'm interested in remembering what comes to fruition when. The harvest was lean for the longest time this spring, but it is gaining momentum now; everyday there is more and more to gather.

Not all comes from the garden; some I forage from the woods, some I gather from the planted fields, some I pluck from the wooden whiskey barrels on the back porch. But nearly everyday, I'm out looking for something to harvest – either for our dinner or as a feast for our eyes. Here's what I've found so far...


Posted by Debbie Galloway at 1:25 PM No comments:

Paris in the Springtime

Just back from a very fun week in Paris with my sister Julie, her daughter Sarabeth and my Mary. We did it all: from Versailles to Notre Dame, from pain au chocolat for breakfast to late night gelato, from Galleries Lafayette department store to the little shoppes of the Marais, from the sparkling Eiffel Tower to a street portrait in Montmartre. Seven short days; a lifetime of memories. 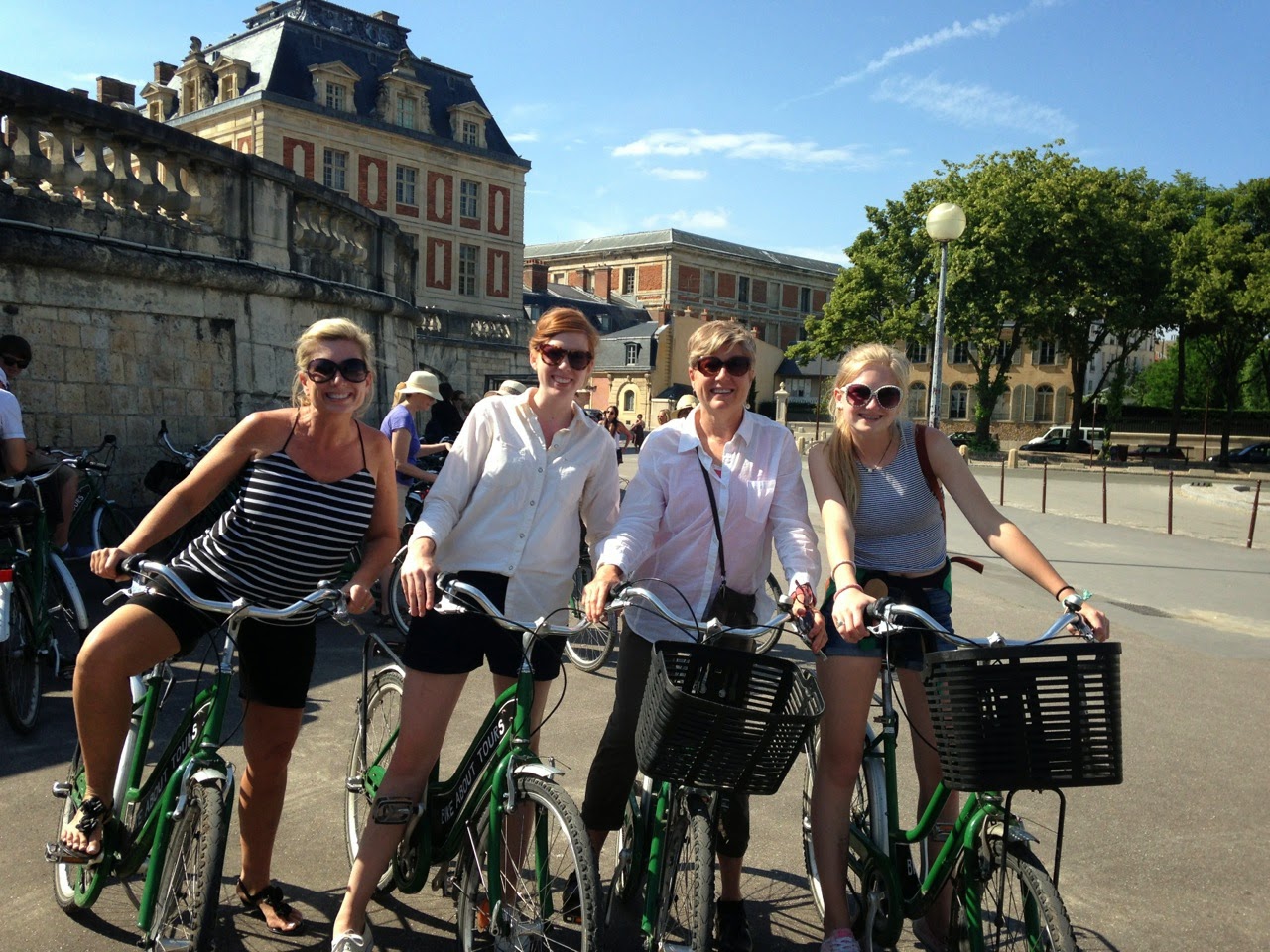 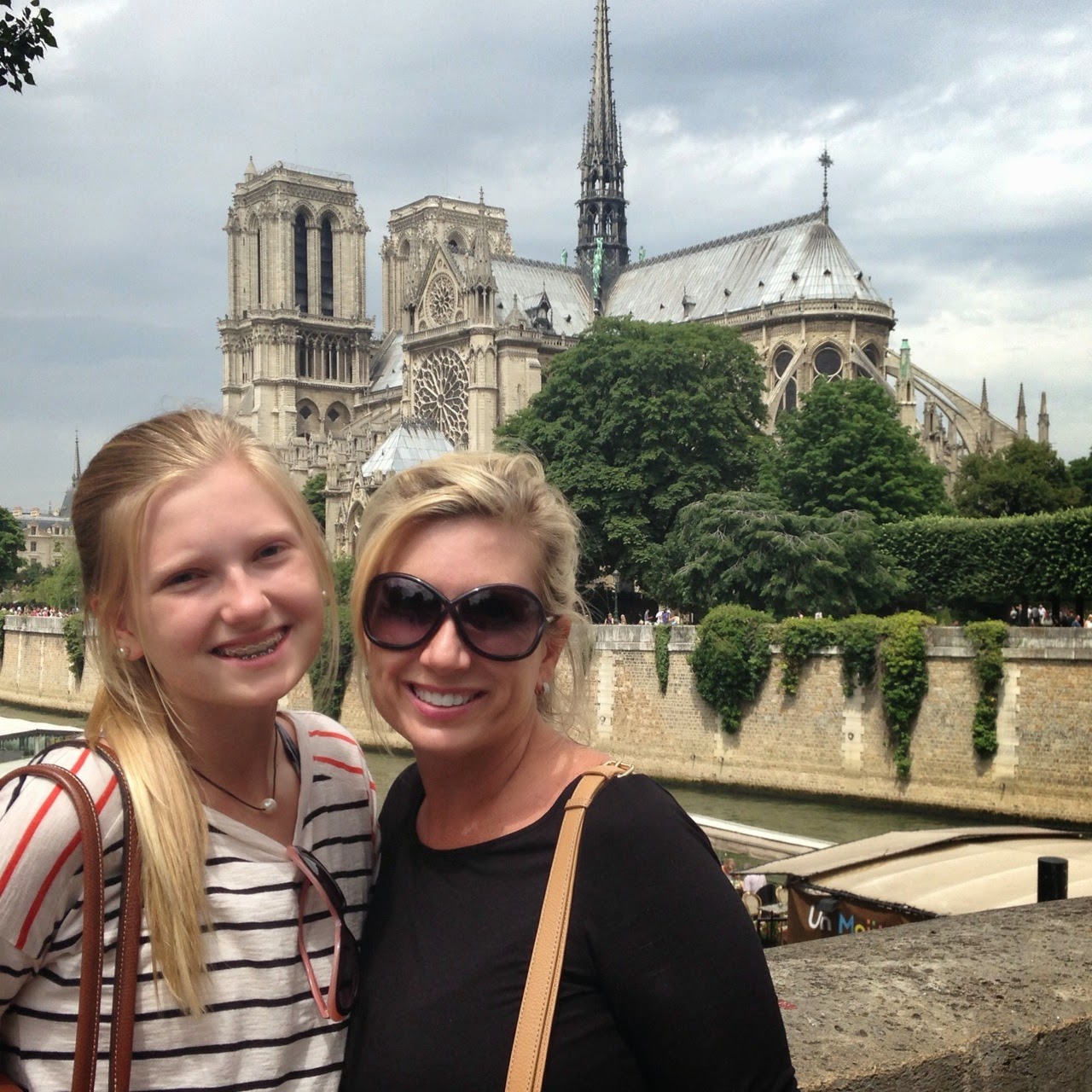 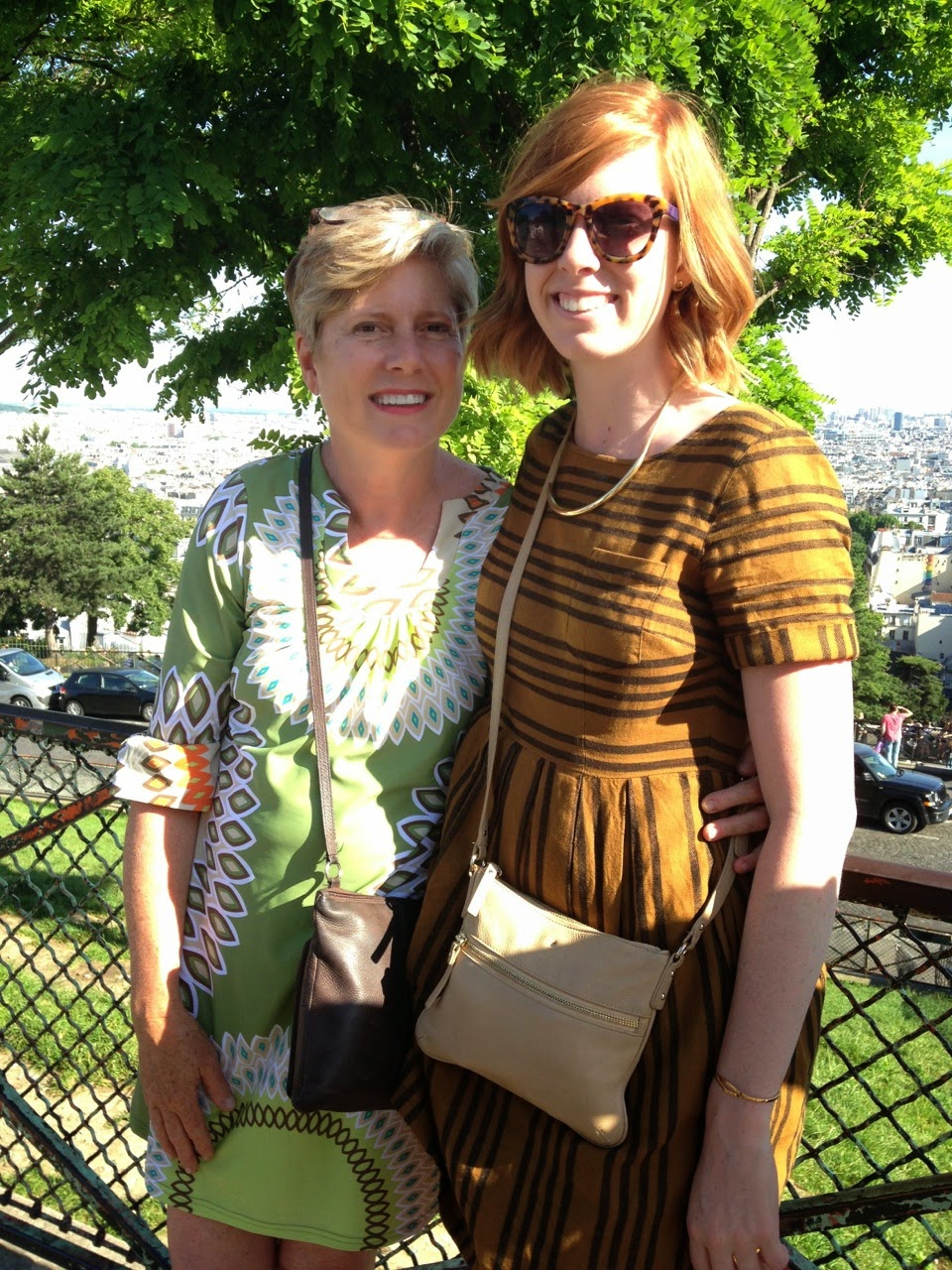 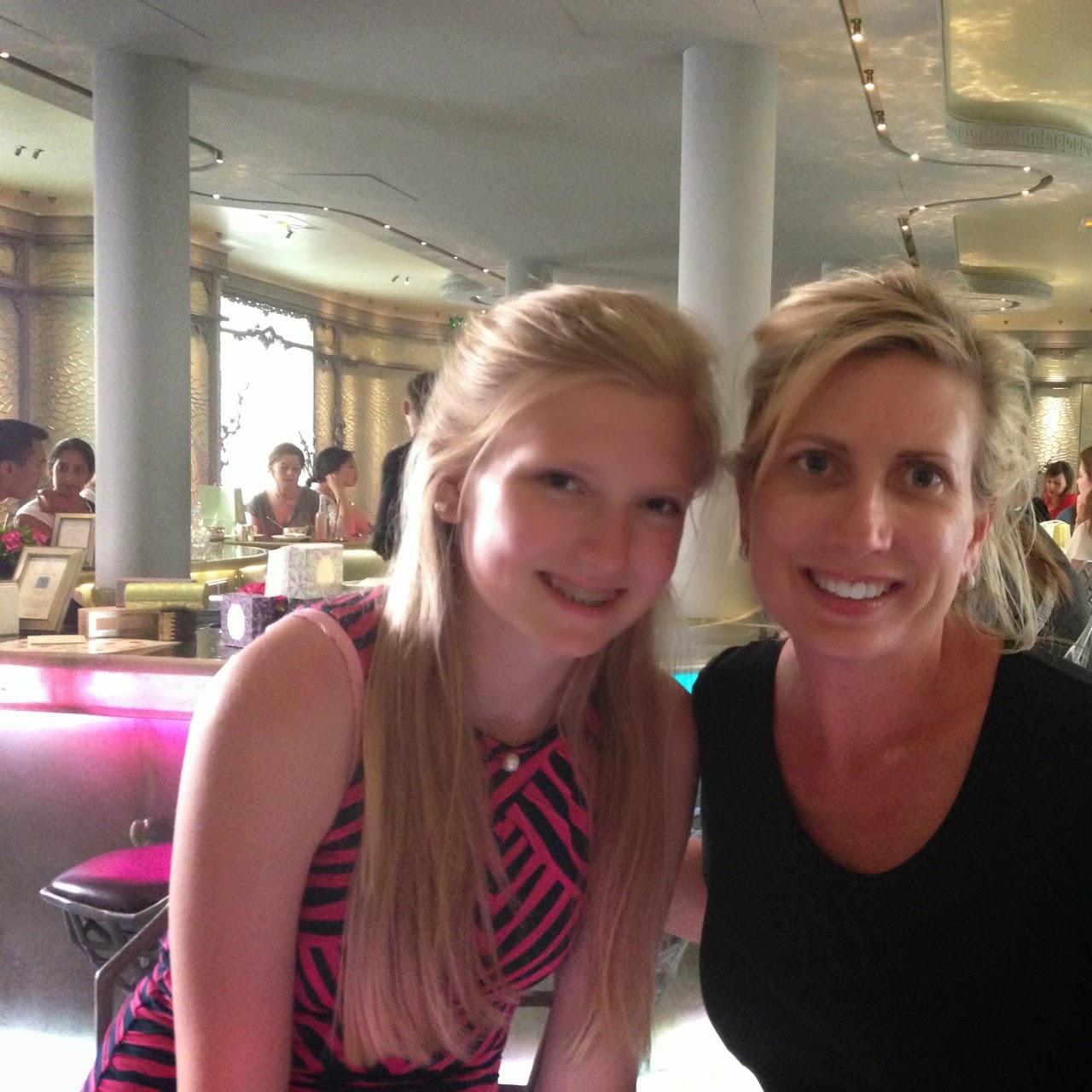 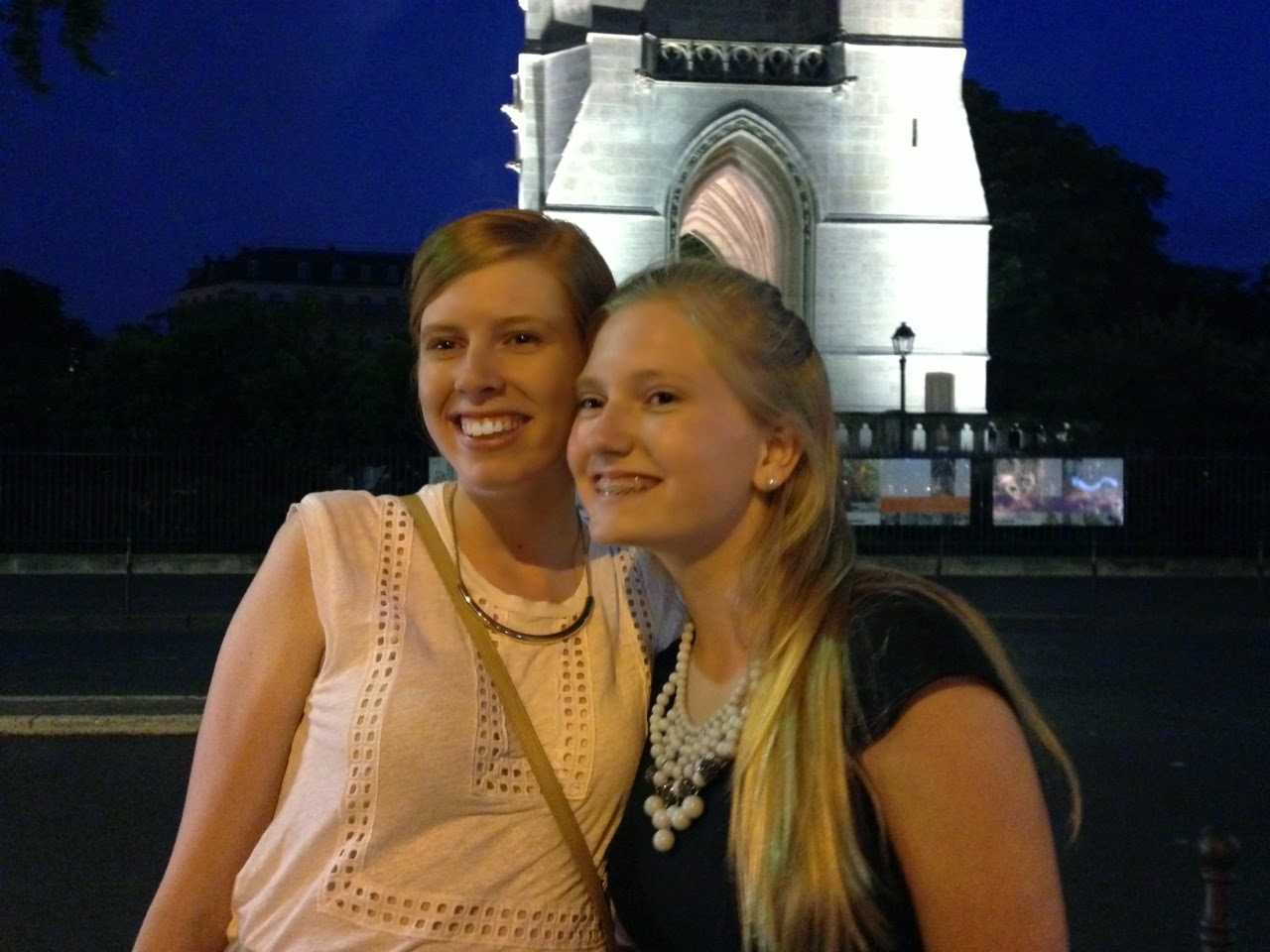 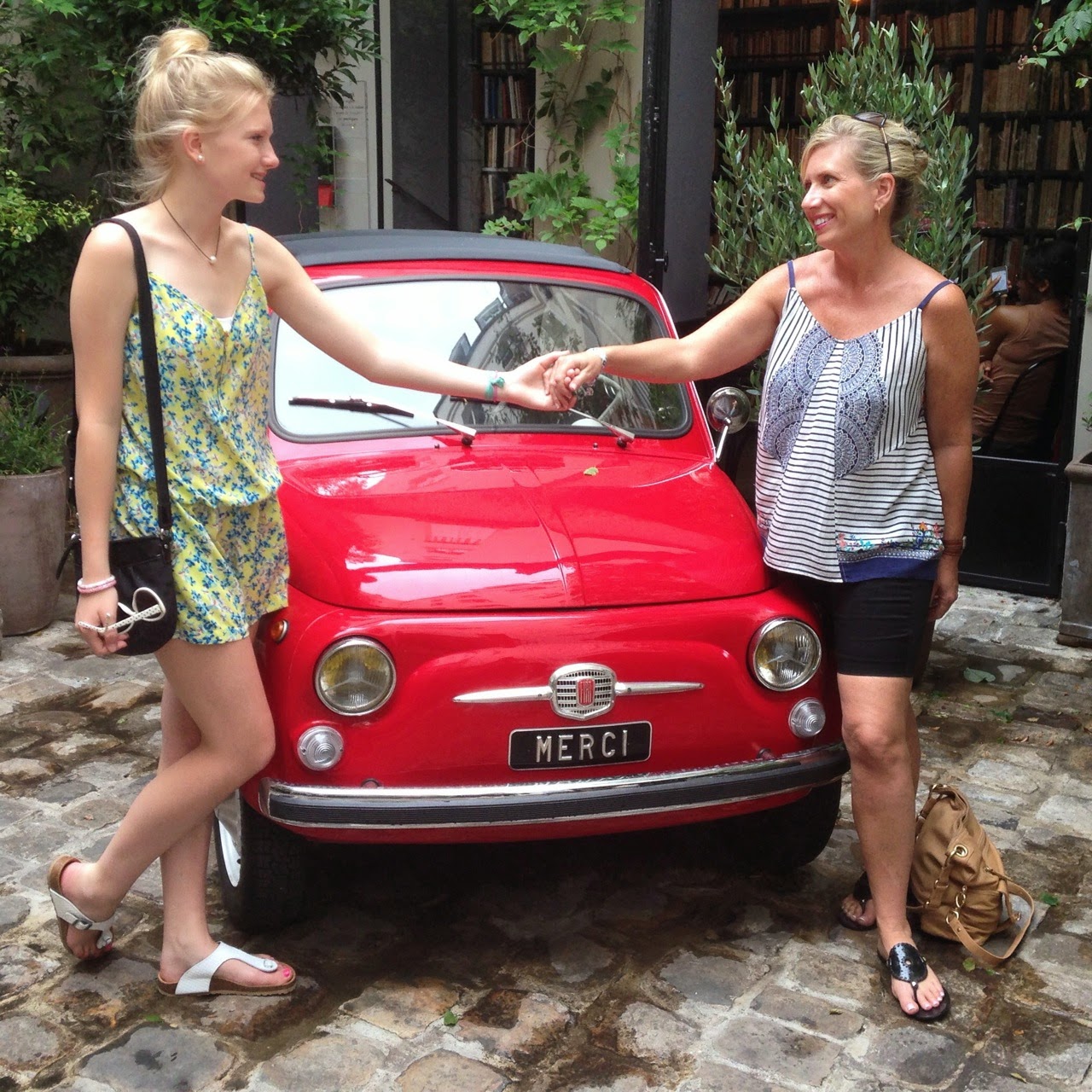 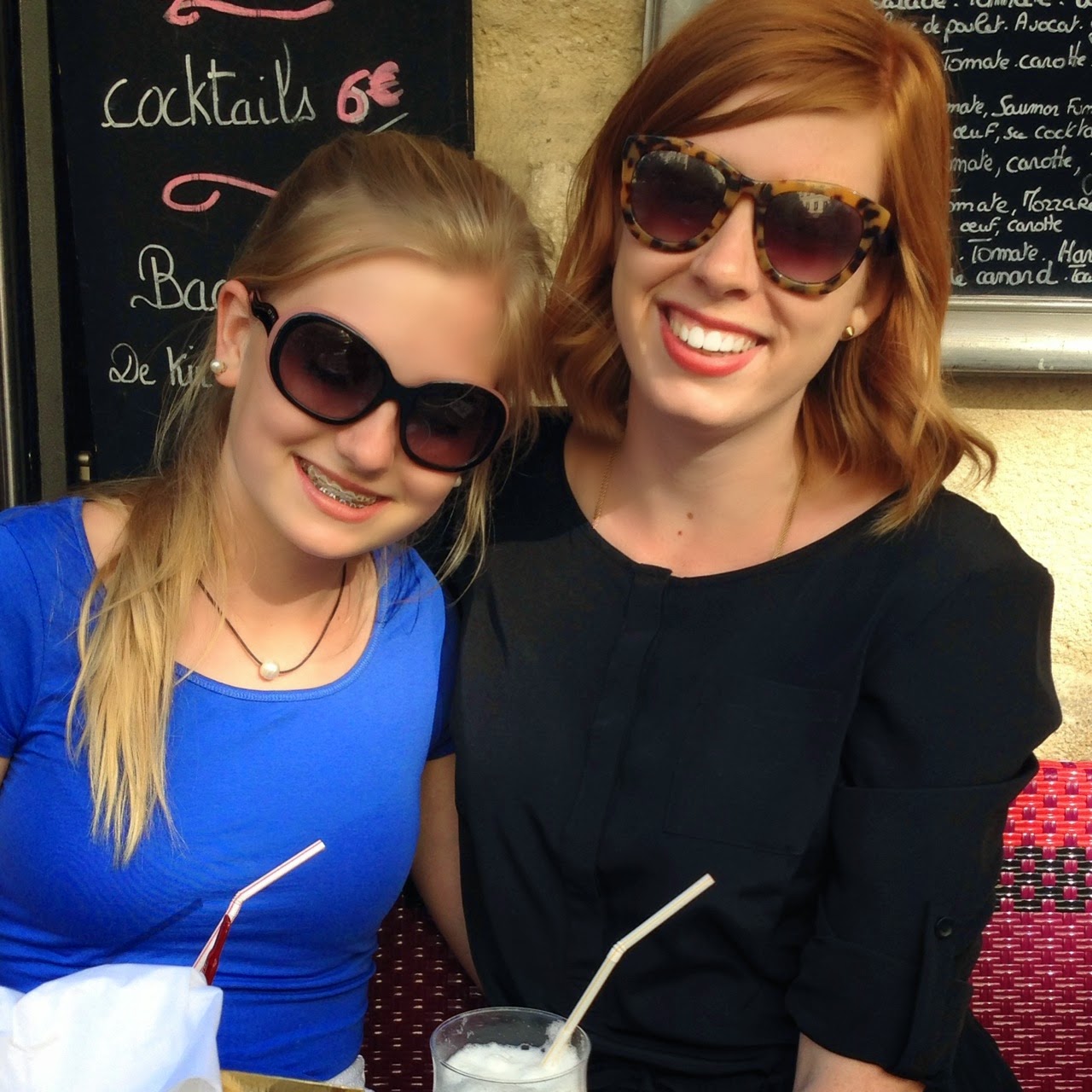 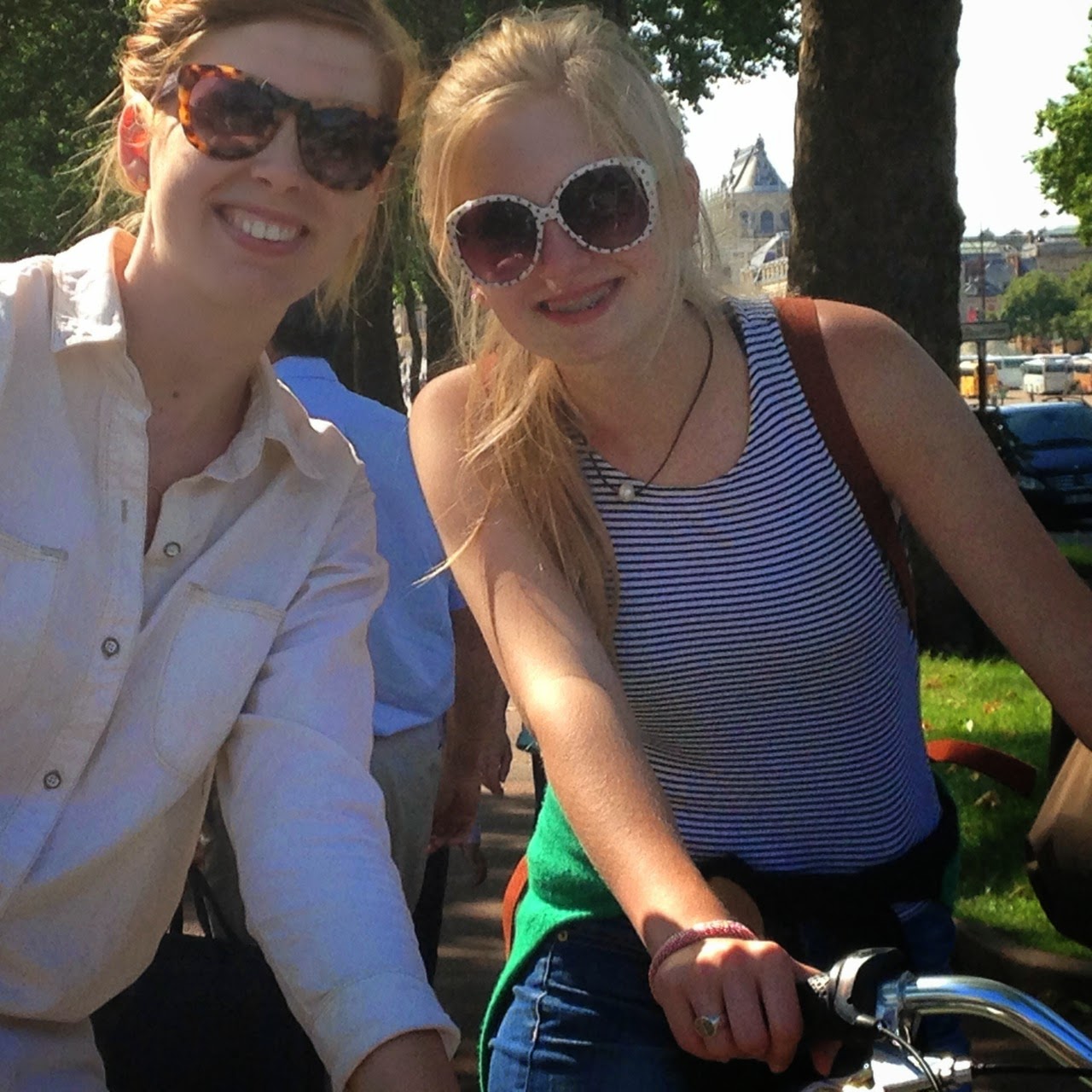 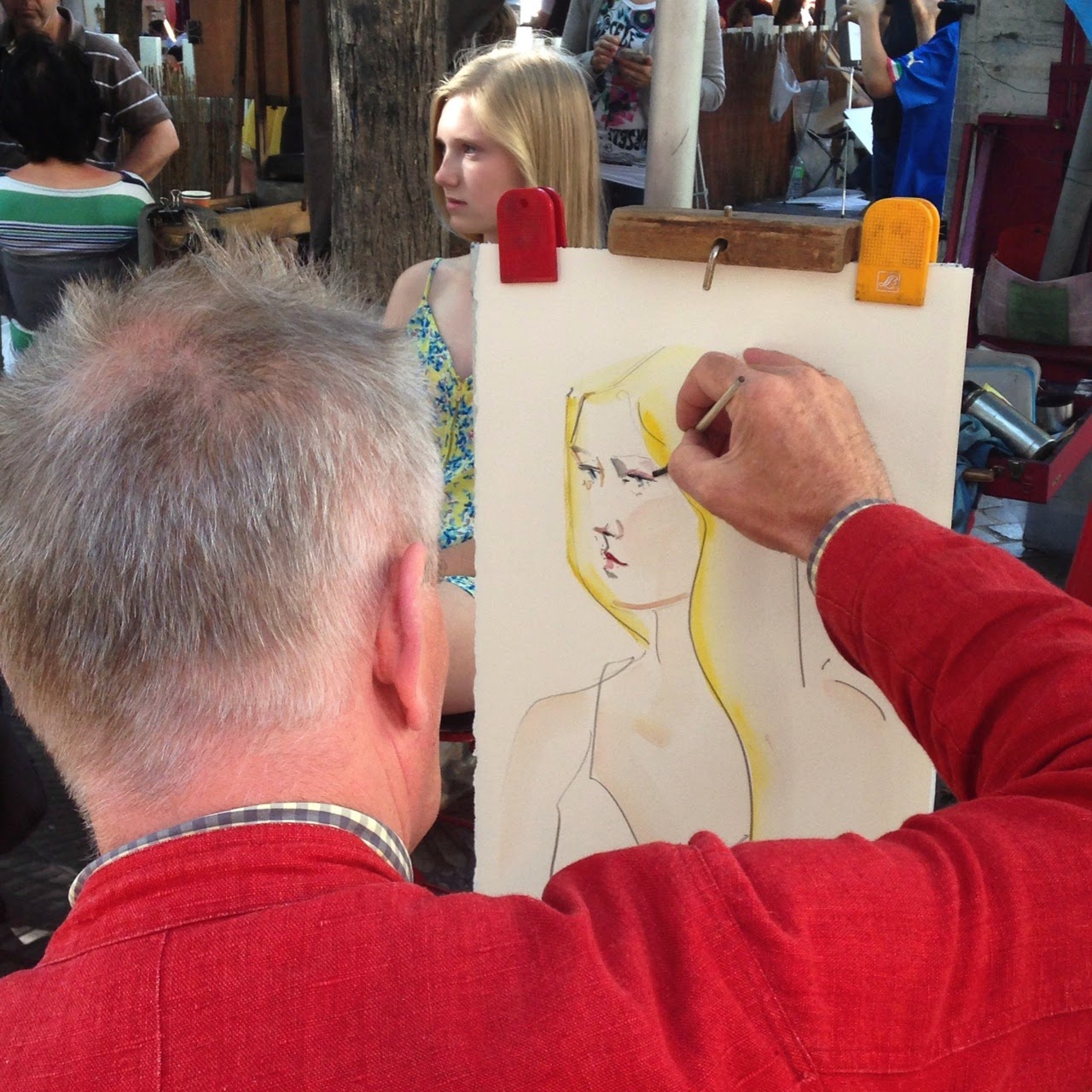 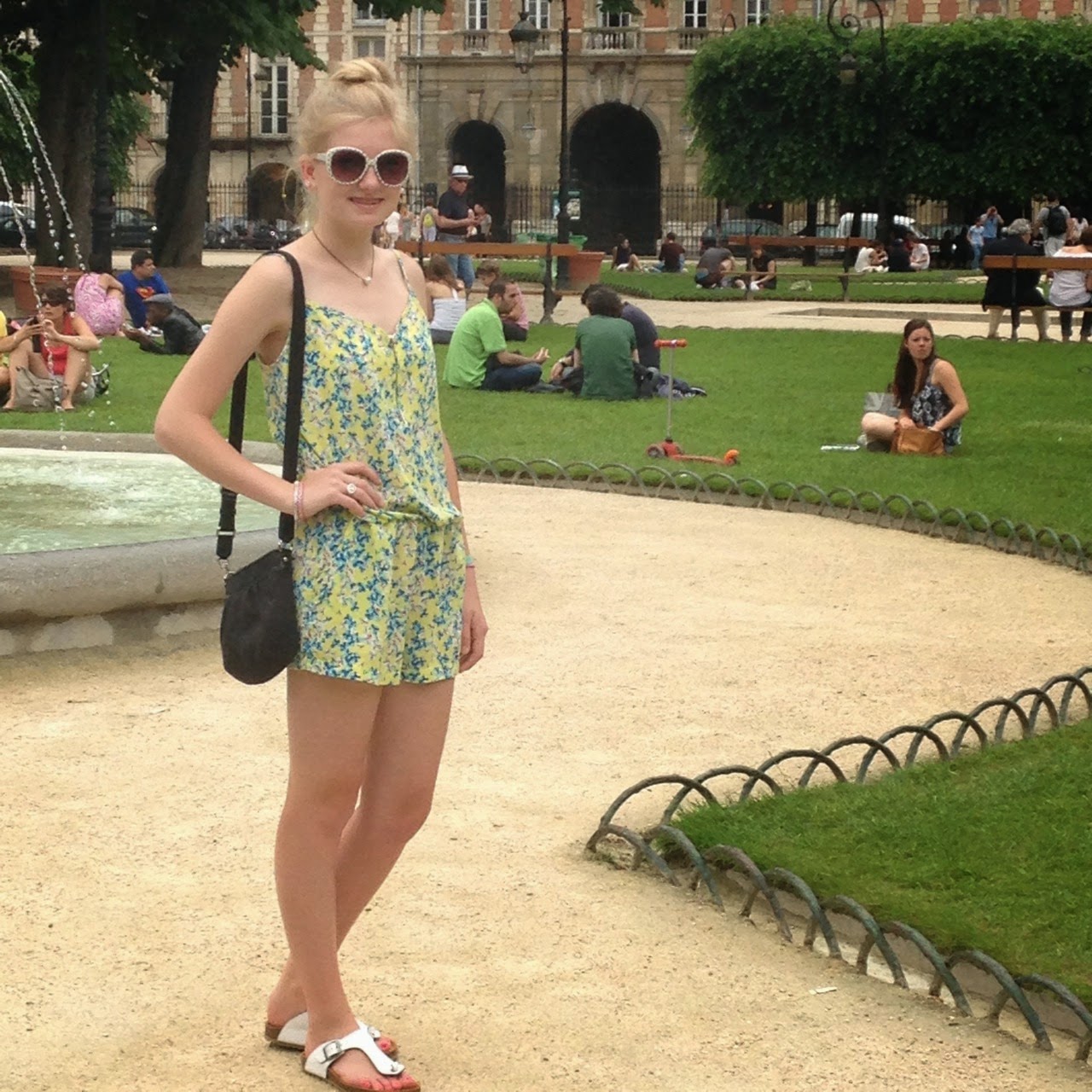 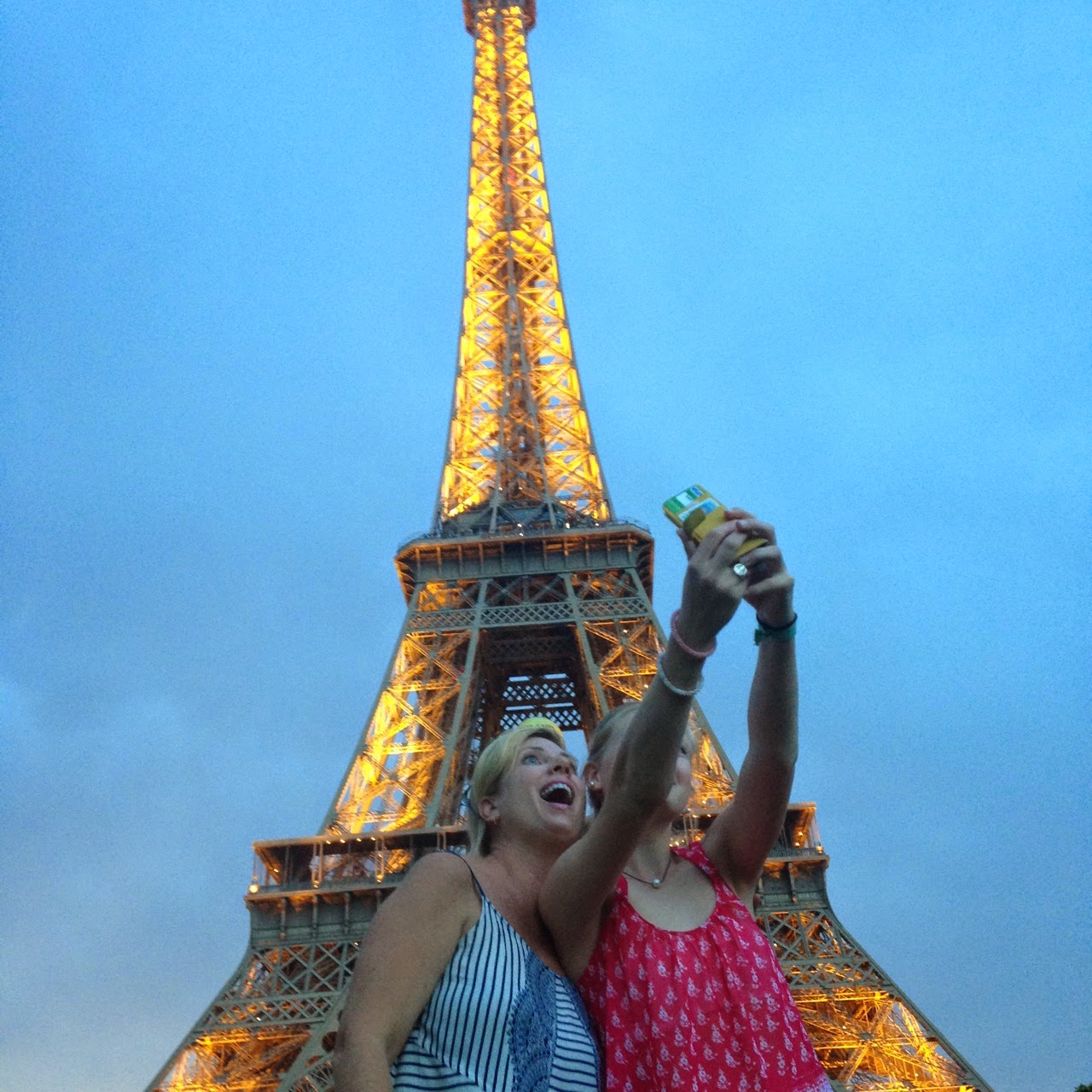 Posted by Debbie Galloway at 8:21 AM No comments: