"Cassoulet, that best of bean feasts, is everyday fare for a peasant but ambrosia for a gastronome, though its ideal consumer is a 300-pound blocking back who has been splitting firewood nonstop for the last twelve hours on a subzero day in Manitoba."
-- Julia Child


Mary was home this weekend for a brief visit and because it had finally turned (relatively) cold out, I decided to make a cassoulet* in her honor. 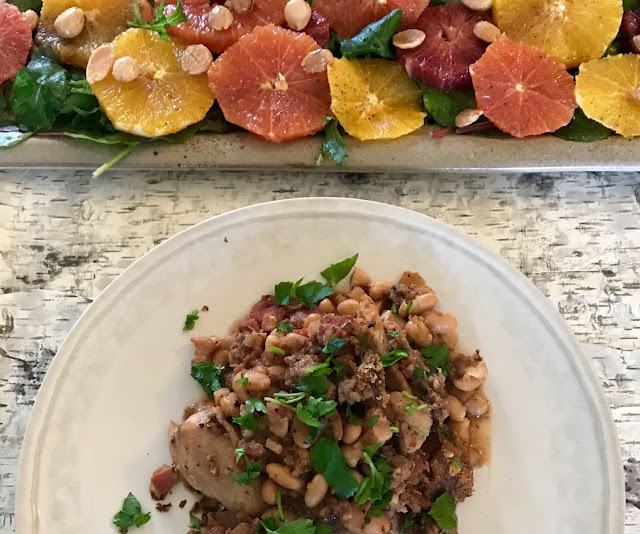 In these days of real and fake news, I feel compelled to put an asterisk by the name of the rustic stew of beans and meats that I served on Saturday night. Mine is far from the classic french dish first served in 1355 during the siege of Castelnaudary in the Hundred Years War. Legend has it that the besieged townspeople gathered their remaining food to create a big stew cooked in a cauldron to nourish and bolster their defenders. The meal was so fortifying that the soldiers handily banished the invaders, saving their city from occupation.

There does not seem to be a clear consensus on what goes into an authentic French cassoulet, but just know that it requires a labor of love, a diligent search for unusual ingredients, and a large block of concerted time in the kitchen. I can remember reading an essay in the now defunct Gourmet magazine that gave instructions for making one that spread the steps out over multiple days. From cooking the pork rind, to confitting the duck legs, to soaking the white beans, it made me realize that I probably wasn't up to the task.


So I contented myself with ordering cassoulet anytime I found it on a menu. I've ordered it in Paris, in Montreal, and even at the Holly Hill Inn in Midway, Kentucky. Each time, I revel in the velvety beans, the chucks of meat and, my favorite part: the bread crumbs that form a crusty top.

One of the best cassoulets that I've ever tasted was served five years ago at a small dinner party hosted by former Louisvillians Mary and Jim Oppel at their home in the Dordogne, in southwest France. I was seated next to Jim and was going on and on about the cassoulet. I wanted to know how he made it, how long it took, what meats it features. Finally, he confessed that it wasn't an authentic cassoulet, but rather one that he made from a recipe in a 1968 cookbook, published in Louisville, KY by Farmington, a historic house located not far from our home in Louisville. Of all things, it used canned beans, leftover chicken thighs and country sausage. It could be put together in part of an afternoon with ingredients that could be found at our local Kroger. It was. delicious. 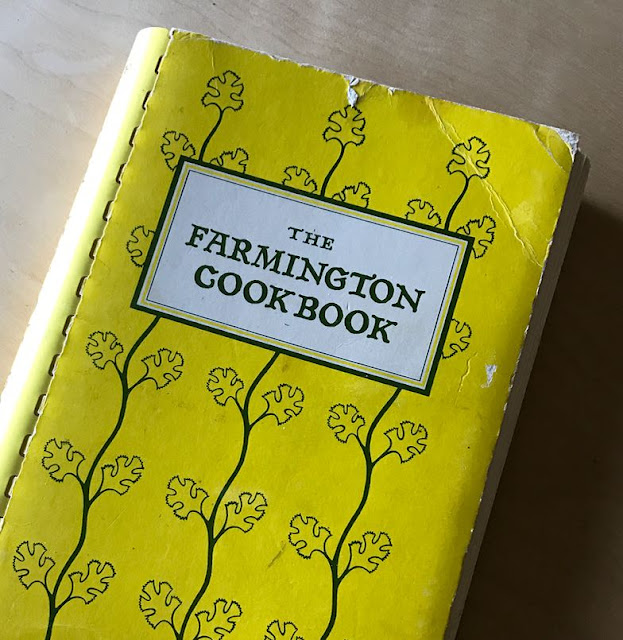 I happened to have my grandmother's copy of The Farmington Cookbook and sure enough, there on page 235, I found the recipe for the faux cassoulet. I've been making it ever since. 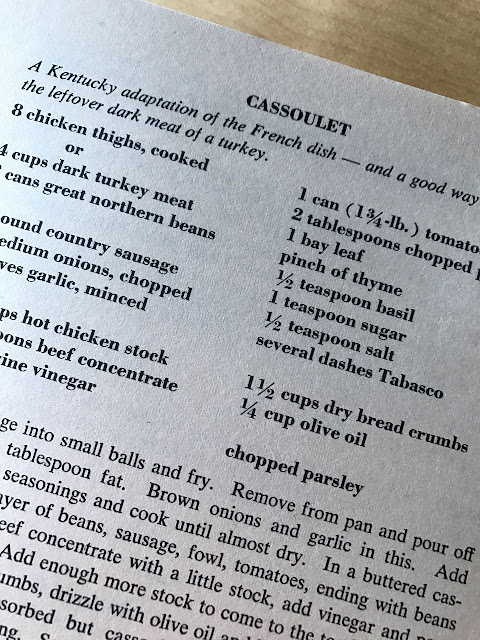 Of course you know by now that I am notorious for not following a recipe, and so here is my adaptation.

In a buttered casserole dish (9"x13") put a layer of beans, then sausage, chicken, and pancetta, then tomatoes, ending with another layer of beans. Mix beef concentrate with a little of the hot chicken stock, add vinegar and and pour over the casserole. Add chicken stock to barely come up to the top layer. Cover thickly with crumbs, drizzle with olive oil, and bake at 325, uncovered, until liquid is absorbed, but cassoulet is still moist, about an hour. Bread crumbs should be golden brown. Sprinkle with additional parsley before serving.

Note: sometimes I make two smaller dishes and freeze one. I do not put the bread crumbs on the frozen one until I am ready to bake it. I let it thaw before baking.
I also find it easier to make this over two days. Cook all the meat and the tomato base on day 1. Cook beans (if using dried ones) and assemble on day 2.

Posted by Debbie Galloway at 5:16 PM No comments:

The weather this week has me bewildered, bemused and flummoxed as temperatures have inched their way up to nearly 80 degrees. It's only February and yesterday Ed and I worked outside most of the day in T-shirts.

In some ways, I welcome this unseasonably warm weather. It's great for planting the 90 tree seedlings* that were delivered to our doorstep last Thursday and I've ventured to plant some peas, spinach and beets in my raised garden and some Easter-egg radishes in one of the porch barrels.

The red-winged black birds and killdeer have returned. When I stepped outside this morning just before sun up, I could have sworn it was mid-April. The dawn chorus of birdsong confirmed that the young male birds are back and their fancy has turned to thoughts of love.

As in past years, I'm itchy for spring – constantly on the lookout for early signs. The first daffodils, Lenten rose, and swollen tree buds. I brought some wild pear branches inside for forcing and sure enough, the tiny white flowers are unfurling right before my eyes. 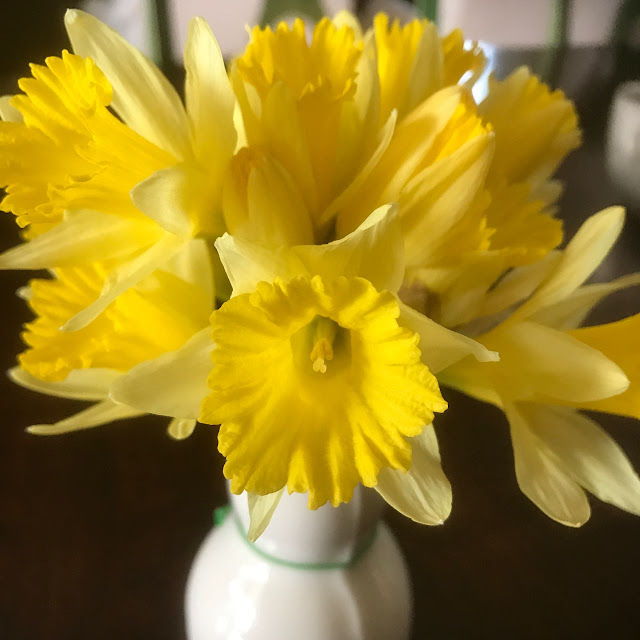 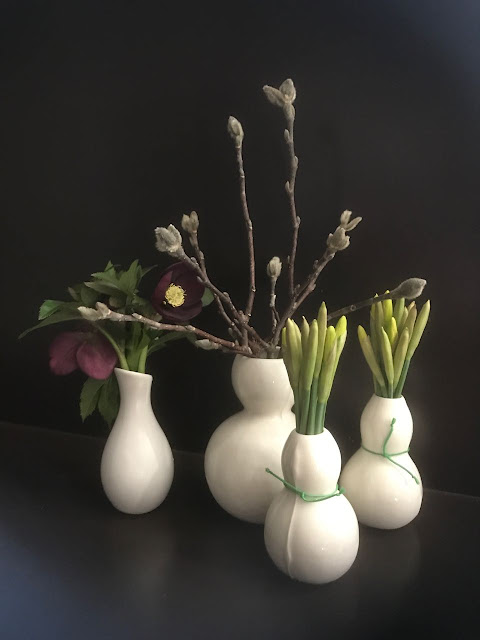 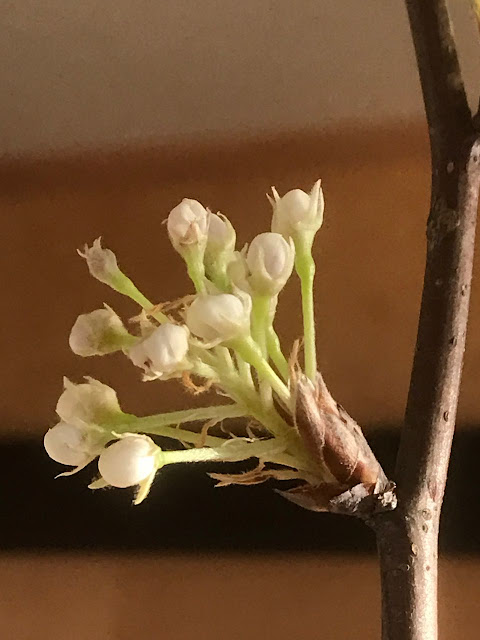 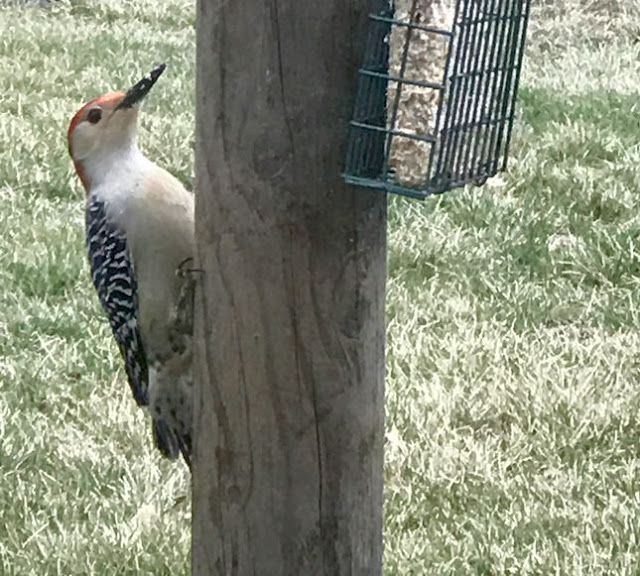 But wait, I haven't experienced a good snow this year and there is nothing I like more than several inches of the white stuff. I want to walk the trails and be amazed by all the animal tracks. I want to make a white-bean cassoulet and sit close to an all-day fire, reading Upstream, Selected Essays by Mary Oliver. I want the heavy snow to pack down the native grasses in our fields so that new growth this spring won't be camouflaged by last year's spent seed heads. I'm not ready to give up on winter. 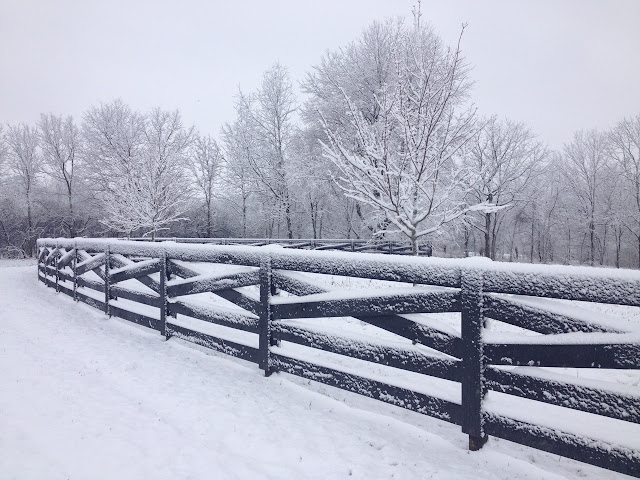 I suppose a good snow could still come. The 10-day forecast has only one night dipping below freezing, so that takes us into early March. If it comes at all, surely it will fall one night and melt away the next day. That would suit me fine. I could get a quick fix.

Mother Nature, bring it on.

Note to self: Seedling trees were ordered from the Kentucky Division of Forestry and included 10 each of: Persimmon, Pawpaw, Sassafras, Wild Plum, Baldcypress, Kentucky Coffeetree and Cherrybark Oak, Water Oak, and Overcup Oak.
Posted by Debbie Galloway at 8:45 AM No comments:

Ed and I are just back from a getaway to Costa Rica where we soaked up the incredible beauty of this rugged, rainforested country. Everywhere we went we were greeted with two words: Pura Vida, which simply translates to Pure Life, but which has far greater meaning to the Ticos in this Central American paradise.

The natives use it as both a greeting or a farewell, as an answer expressing that things are going well, as a way of giving thanks, or showing appreciation. The saying goes beyond its simple translation and has become a way of life that evokes a spirit that is carefree, laid back and optimistic. On more than one occasion, we were advised that life is short; so we need to start living it "pura-vida style."
______________ 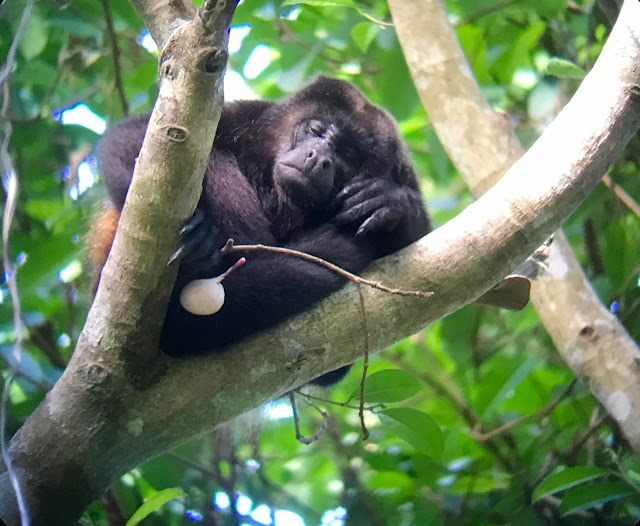 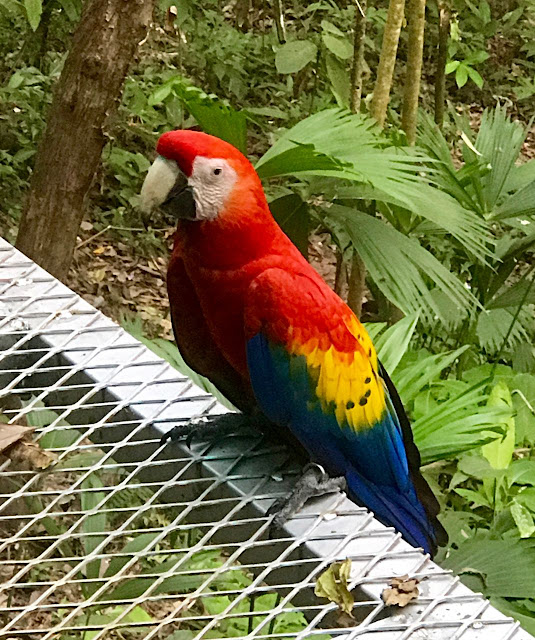 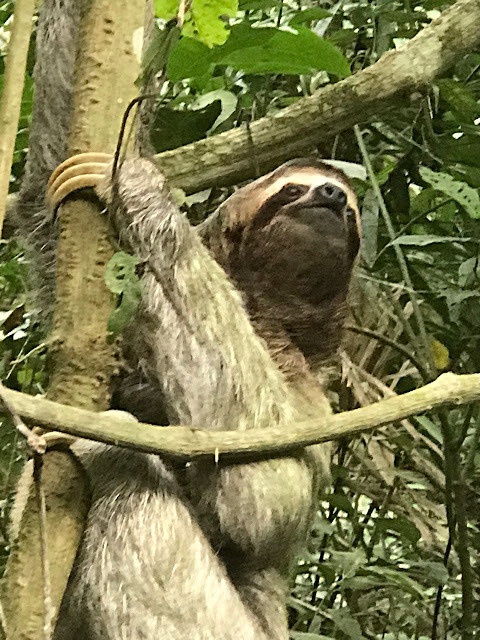 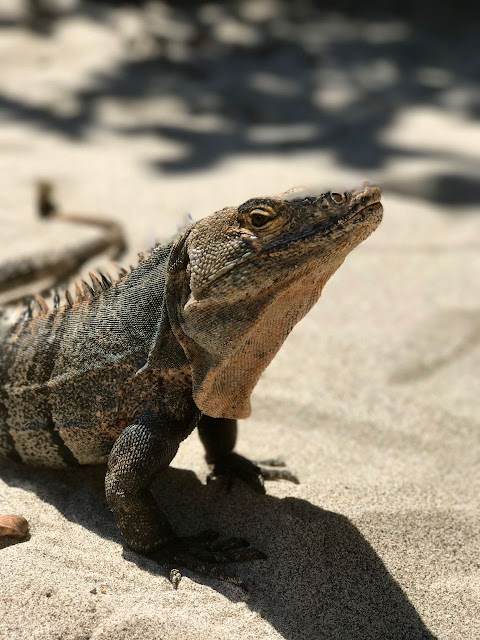 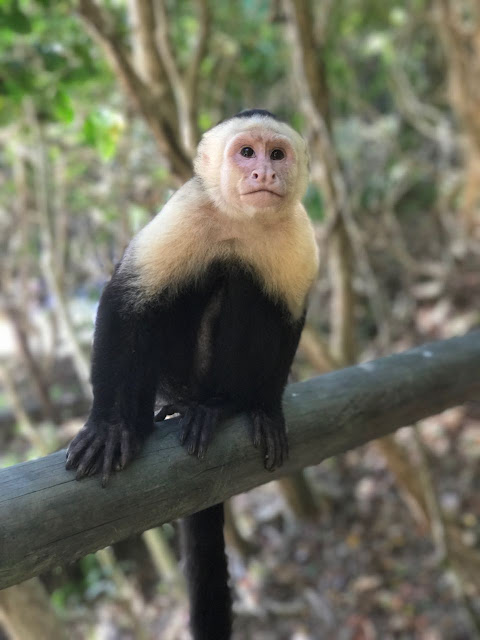 I hope this optimistic mindset extends for us far beyond the 12 days that we traveled. Pura Vida! 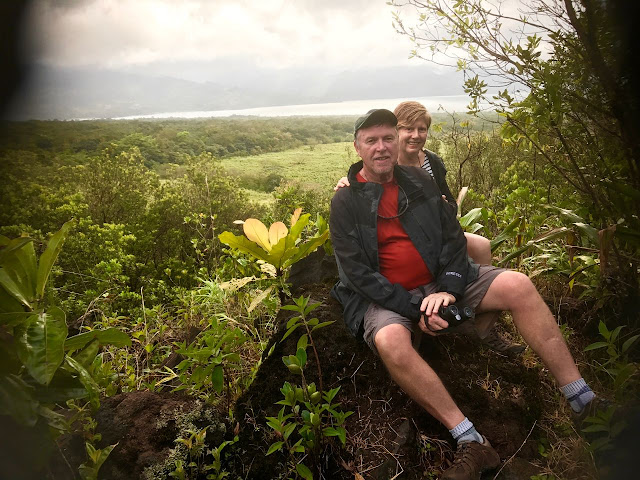 To help me remember the details of our trip -- and perhaps to encourage you to plan one of your own -- here is a list of where we stayed and a few of the things we did.

In San Jose (the capital city)
Hotel Presidente
Walking Tour, including the Central Market and Lunch


Rather than rent a car, we contracted with Costa Rica Drivers for all our transportation between locations.

Posted by Debbie Galloway at 9:23 AM No comments: