Every October Ed and I take a car trip — the kind of trip we like most, where we just wander from place to place, stopping wherever we like along the way. Usually we head east to the mountains of North Carolina, once making it all the way to the Outer Banks. We camp, or stay in cabins. Take hikes and leaf peak. Celebrate our anniversary. 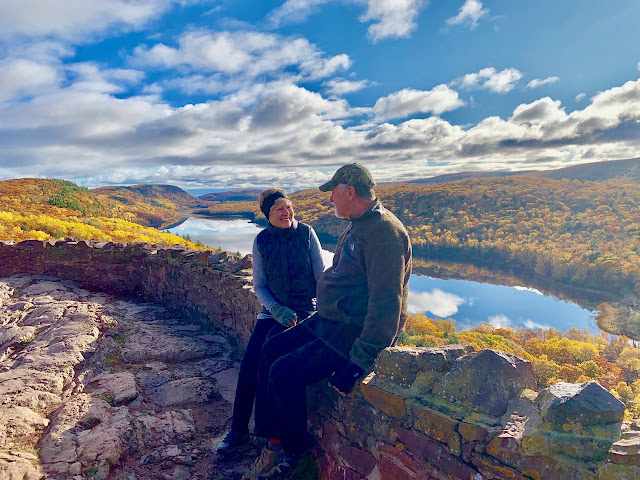 This fall, we headed north — way north — all the way to Michigan’s Upper Peninsular, that bridge of land that stretches between Lake Superior and Lake Michigan, above the tip of Michigan’s mitten. It was a new part of the country for me and a place that I would gladly return. 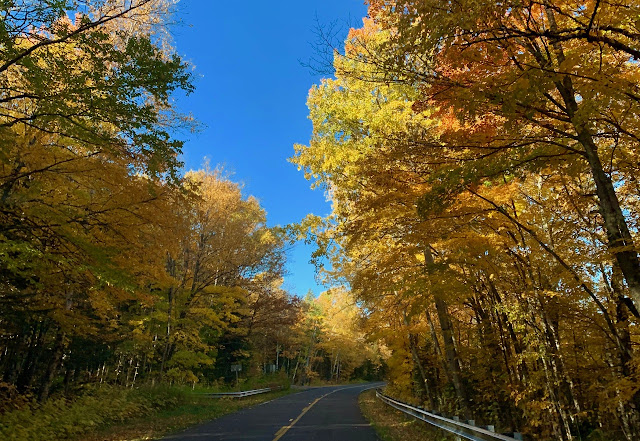 Our trip started with an afternoon and overnight in Milwaukee, a city known for its beer and baseball. (We drank the beer; saved a Brewers’ game for another time.) We spent the afternoon exploring the city’s Historic Third Ward, a creative hub for art galleries, trendy restaurants, boutique shoppes and its indoor Public Market, where produce, cheese and fish vendors hawk their wares, and where we perched on bar stools for a mid-afternoon snack of a brat and beer.

Next stop: Fish Creek, WI, rightfully designated by Forbes as one of the prettiest towns in America. Located in Wisconsin’s Door County — famous for its cherries — it’s one of a series of small towns on the skinny peninsula that separates Green Bay from Lake Michigan. In a word, it was charming. We stayed for two nights at The Wren Cottage of The Thorp House Inn. I suspect the town is overrun in its high season, but we arrived late enough in the year to easily score a table for brunch at The White Gull Inn and dinner at the Whistling Swan. 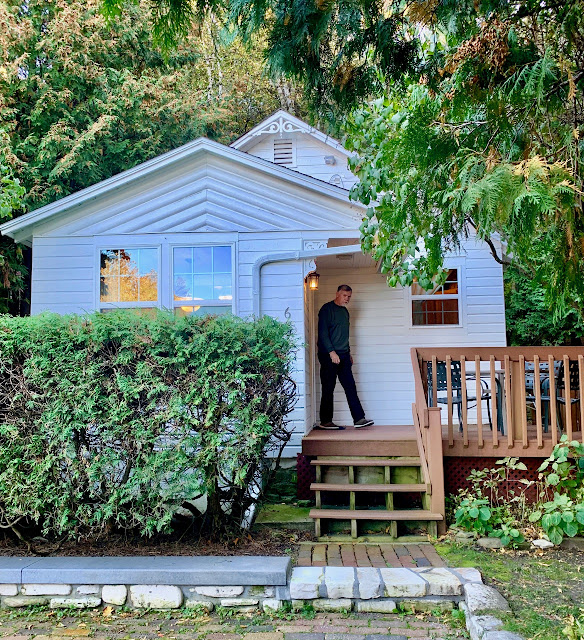 Leaving Fish Creek, we backtracked down the peninsula and then turned north, crossing over into Michigan’s Upper Peninsula for a two-night stay in the coziest little cabin located next to Porcupine Mountains Wilderness State Park. 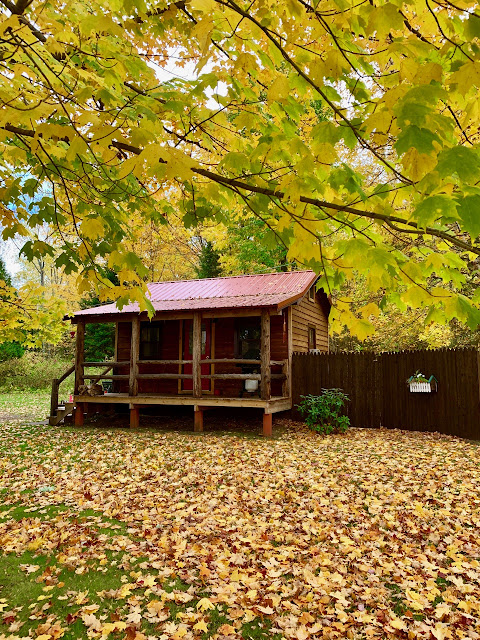 We woke to sunshine, packed a picnic, and headed into the park destined for the Lake of the Clouds. Never have I seen trees more beautiful — sporting neon shades of yellow, orange and red — glowing like embers. 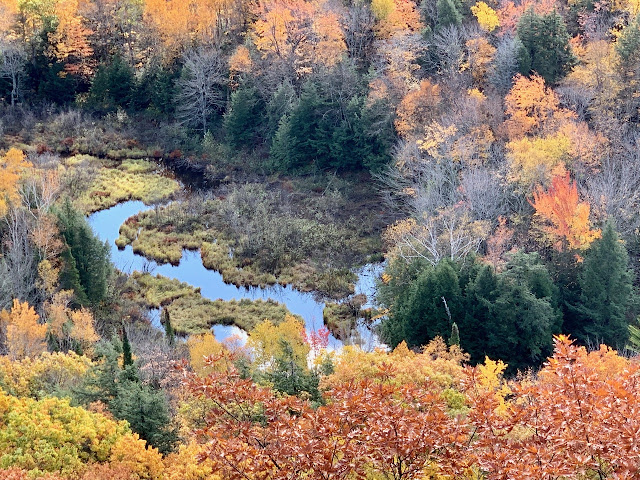 After a chilly hike, we drove to Presque Isle, on the far western side of the 60,000-acre park and hiked down to the waterfall that gushes out into Lake Superior. We found a spot on the lakefront that was sunny and protected from the wind where we lunched on an apple and cheddar cheese, a handful of cashews and a square of chocolate. 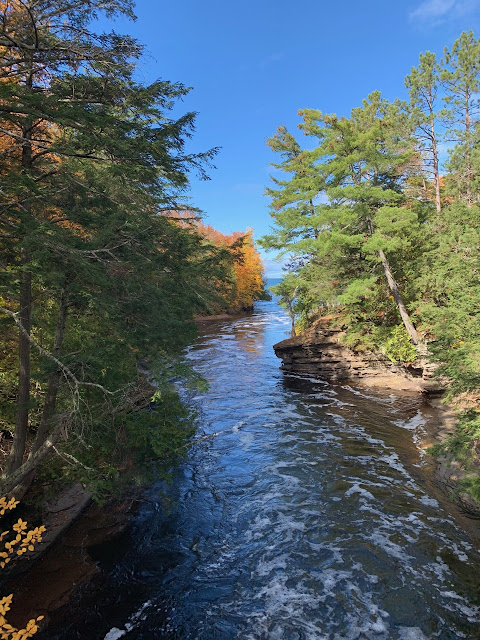 Our picnic spot reminded me of when Ed would read aloud to our kids Longfellow’s Song of Hiawatha that begins:


By the shore of Gitche Gumee,
By the shining Big-Sea-Water,
Stood the wigwam of Nokomis,
Daughter of the Moon, Nokomis.

Sure enough, Gitche Gumee is the Ojibwe name for Lake Superior. So we literally lunched on the shores of Gitche Gumee, of the shining Big-Sea-Water. I don’t know why, but this made me oddly happy.

Once back at our tiny cabin, we binge-watched the last four episodes of “Unbelievable,” which we are unable to stream from home. This also made me oddly happy, but, at the same time, distraught by the storyline. If you haven’t watched it, you should. 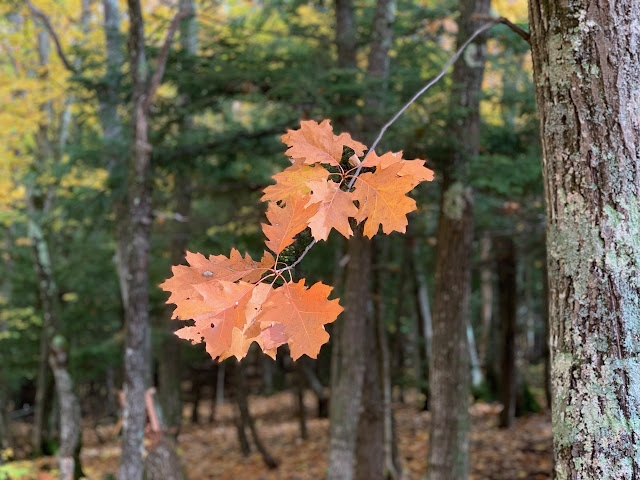 Day 6 we drove to the tip of Michigan’s peninsula, spending the night in an old-fashioned motel in Eagle Harbor, and dining at the only restaurant in town, attached to the motel, a knotty-pine paneled supper club serving freshly-caught whitefish.

And then onto Munising, where we cruised 36 miles of Lake Superior, glimpsing one amazing landscape after another of Pictured Rocks National Shoreline. Chilled to the bone, we returned to Roam Inn to find an anniversary bottle of Champagne chilling for us, compliments of the hotel. Later, we headed downstairs for dinner and to continue celebrating 34 years of marriage. 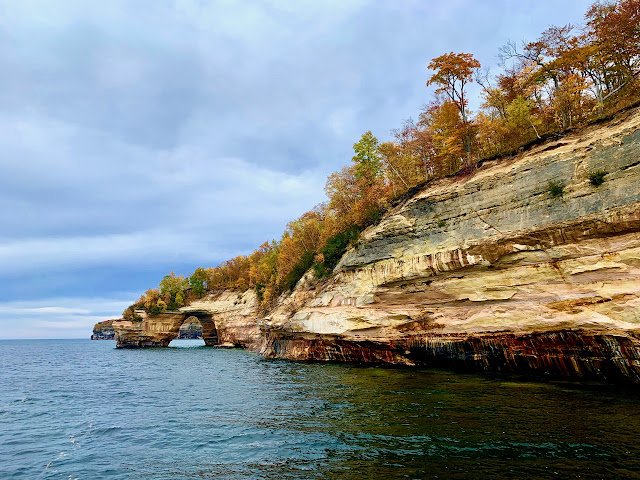 Our final scheduled stop was The Grand Hotel in Mackinac Island MI — and it certainly was grand, boasting a sweeping 660-foot porch, 397 rooms and a dining room that requires coat and tie for men. The island is delightful, with no automobiles, but lots of horse drawn carriages, bicycles and fudge shops. 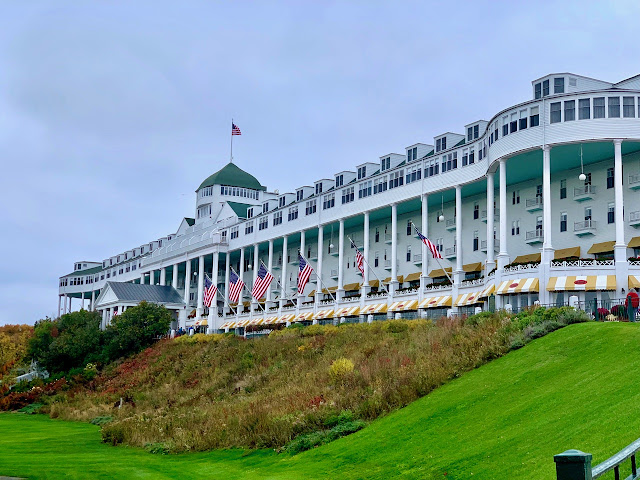 Time to head home. But first, one more stop in New Albany to see how much Hazel had grown while we were away... 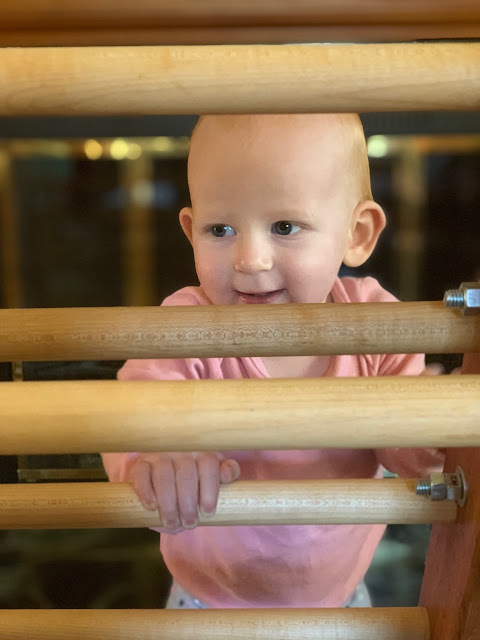 Some details and links of our trip...

Posted by Debbie Galloway at 5:15 PM No comments:

It's been nearly six weeks since we felt more than a sprinkle of rain. Farm Dover is stressed (and so are Ed and I). Every day Ed fills up the 35-gallon water tank strapped on the back of the Polairis and heads out to water the tiny (and not-so-tiny) trees that we have planted. When the tank is drained, he heads back to the garage and refills it. He is on auto-repeat.

My herb garden and porch barrels get watered on a daily basis and the bird bath gets filled because it is not just the flora of Farm Dover that suffer; the birds, bees, butterflies and other fauna need water too. I've stretched the hose out its full length to water our orchard trees, the hydrangeas along the cottage, and my strawberry and tomato plants –– all of which seem to sigh with relief when watered.

The 60-gallon rain barrel down by the cottage stands empty; its water already siphoned off bucket by bucket to keep the newly planted ferns alive in my girl cave.

The golden rod of the fields and the tall native grasses have turned a soft sepia. The dark wildflower seed heads silhouetted against the cloudless skies sway above the grasses. The milkweed seed explodes from its pods.  My footsteps along the wooded paths make loud crunching noises from the fallen walnut leaves. The hickory trees have turned paper brown while the maples trees are making a valiant effort to put forth a bit of fall color -- at least four weeks earlier than normal. 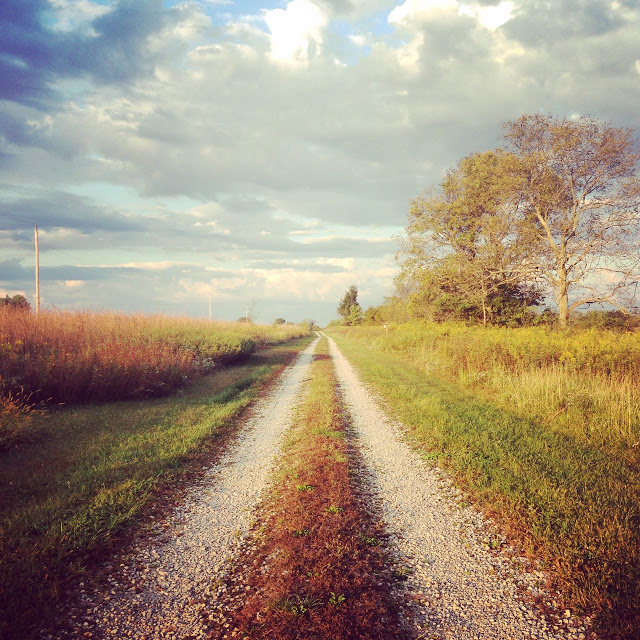 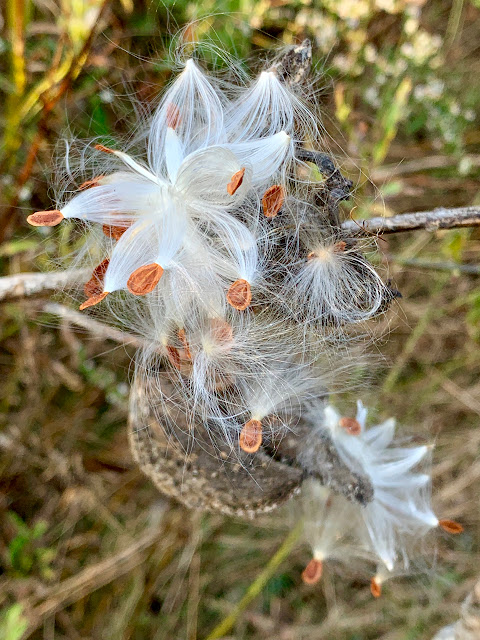 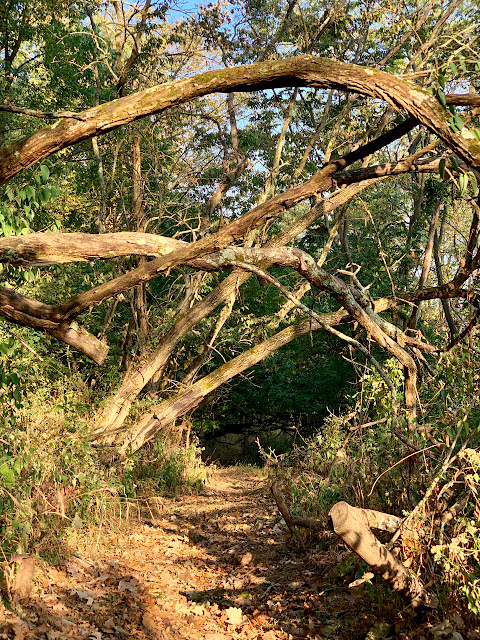 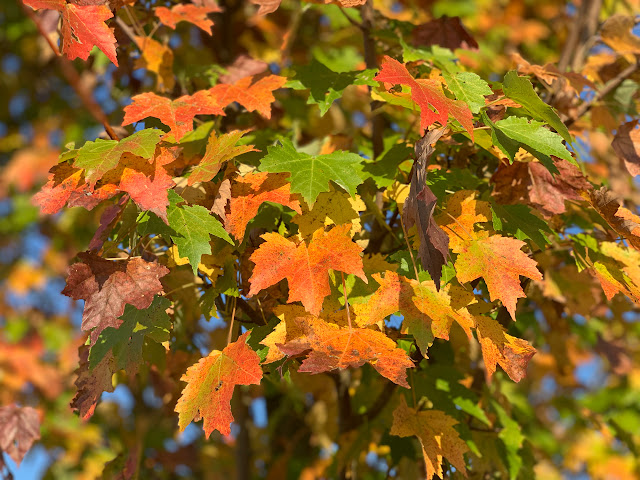 The creek that runs along the north side of our property is completely dry. I've been walking along its bed, selecting rocks to build up three crossings. I expect to find some form of life under the rocks I pry up, but instead, find nothing but cracked and dried mud. I don't know where the crawdads and tadpoles have gone. And whether they will ever return. 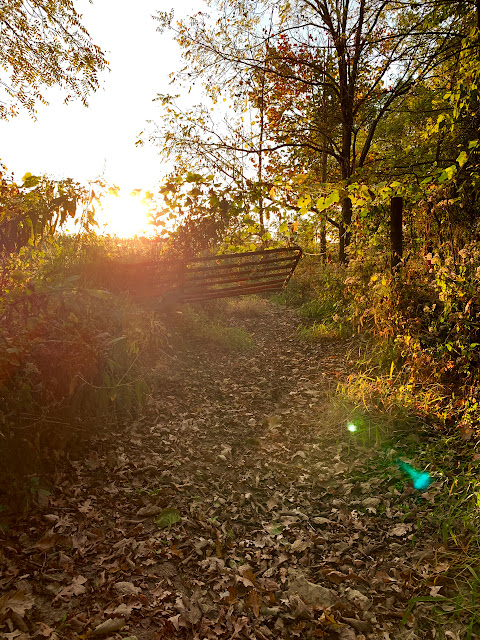 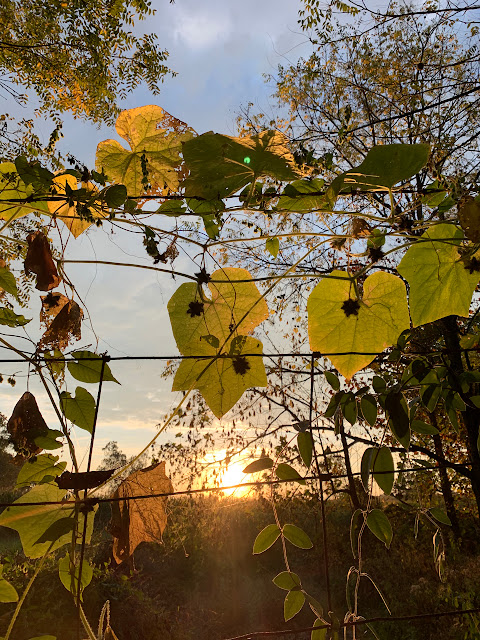 Last year I harvested zinnias well into November. Now, the blooms are drying up; turning to seed. 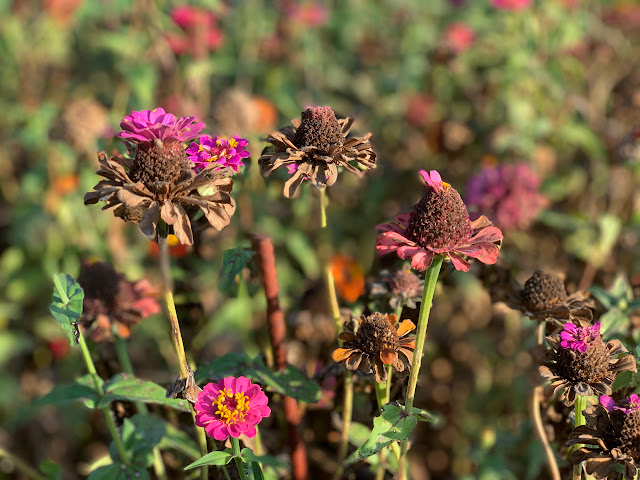 Remarkably – maybe not surprisedly – the native flowers and grasses in our bee garden and meadows seem to be hanging in there; the drought brings out the best of their resilient nature. The asters especially refuse to give up blooming and succumb to thirst. 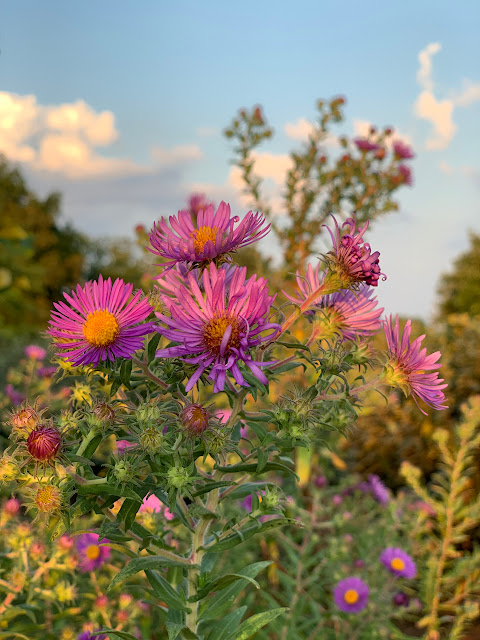 I can feel the dryness in the air and the weatherman confirms my dismay. September was the driest month in local recorded history with only 0.04 inches of rain. Already more days have been above 90 degrees than ever recorded in a single year.

This little patch of land that we tend is suffering, but so are patches of land the world over. Extreme weather – excessively high temperatures, heavy downpours, hurricanes, floods and droughts – all caused in part by human behaviors are threatening life here on earth. Young Greta, I hear you. We must figure this out, together.


Posted by Debbie Galloway at 2:42 PM No comments:

My dad (aka Honey) turns 89 today and still loves to hit golf balls, so that's how we celebrated. My sister Kathy picked him up from his new home at The Legacy and then met sisters Sherry, Julie and me at Midland Trail Golf Course, founded in 1964 by my dad's father: John R. Carpenter, Sr.

We met on the practice tee for some friendly competition: a long-ball event and a closest-to-the-hole. Sister Sherry is the only one of Dad's daughters who still plays regularly, but we all grew up playing – coached and caddied by my Dad, who was a left-handed scratch golfer with a claim-to-fame of winning the 1947 Junior Falls City Tournament. 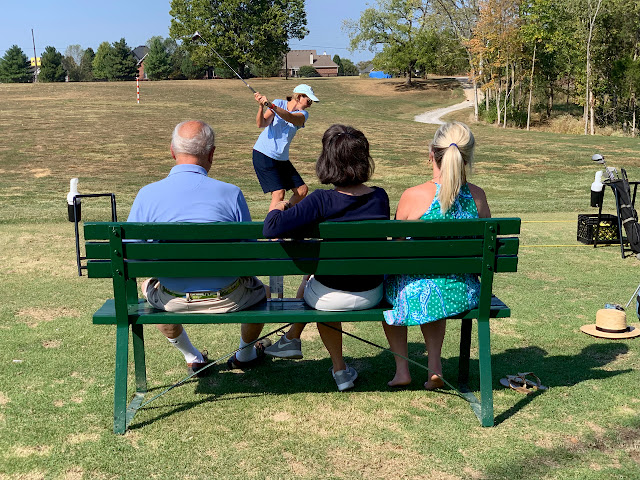 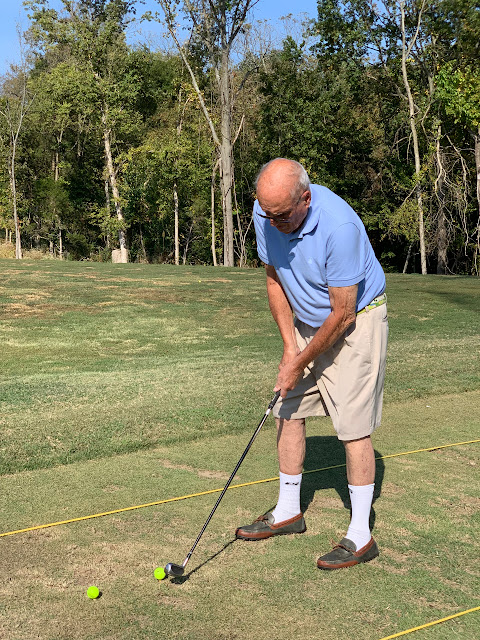 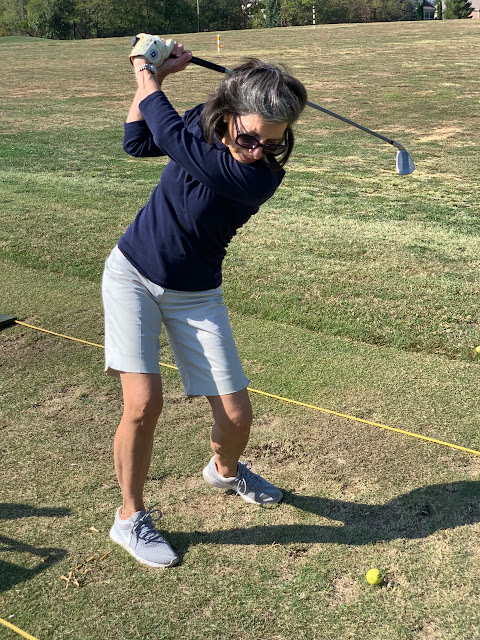 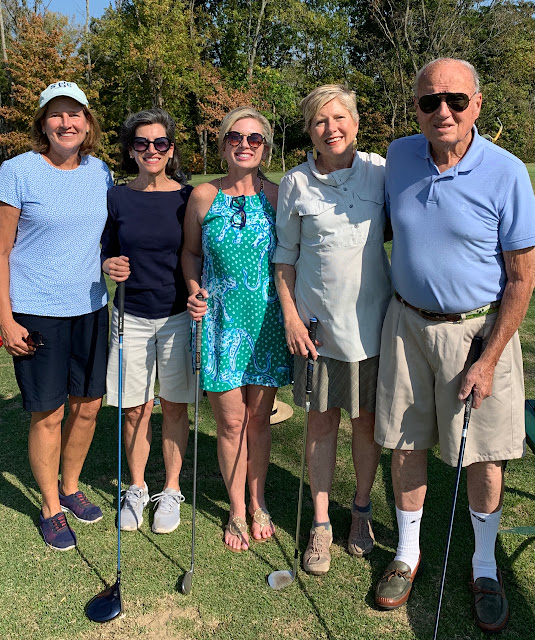 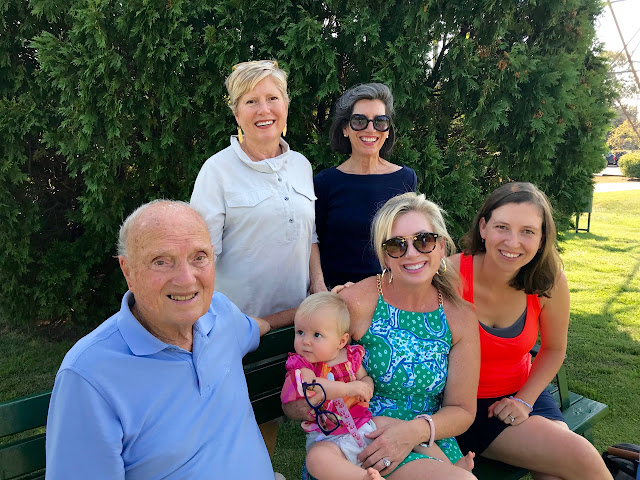 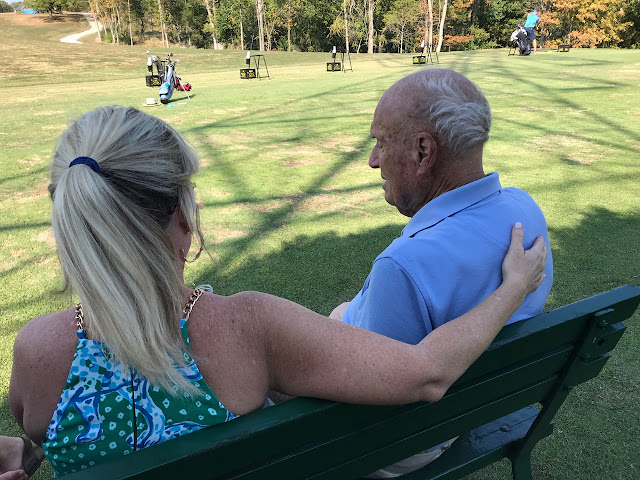 Two grandchildren, three great grandchildren and Dad's brother joined us for lunch in the clubhouse. Stories were told, candles were blown, homemade cake was consumed, and laughter abounded. Not a bad way to spend your 89th birthday! 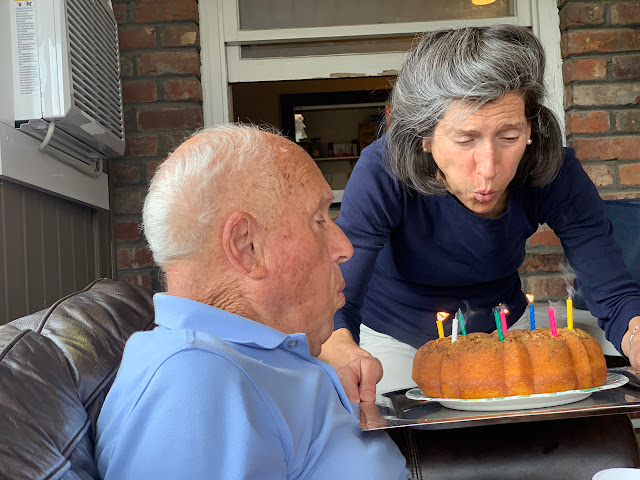 We love you, Honey, and wish you many more happy days....