It’s dusk. Ed and I are breezing down the narrow lane that connects our road to Highway 53 in our pickup, windows rolled down. Feels like summertime, but I can tell fall is just round the next bend.

“Slow down just past this fence post,” I say to Ed. “No, no, not that one; maybe the next one.” “Yes, that’s it. Pull over just a bit.” He glances in the rear view mirror to make sure no other cars are behind us. None coming – no surprise on this rarely travelled road.

I reach out the window and snap off a few red tops of the wild sumac growing along the roadside. I’d been scouting sumac all summer and had spotted these earlier in the evening as we were on our way to wildlife identification class put on by the county’s extension service. I’d been thinking about them ever since, when I should have been paying closer attention to the discussion of how to tell a coyote’s pawprint from a bobcat’s. 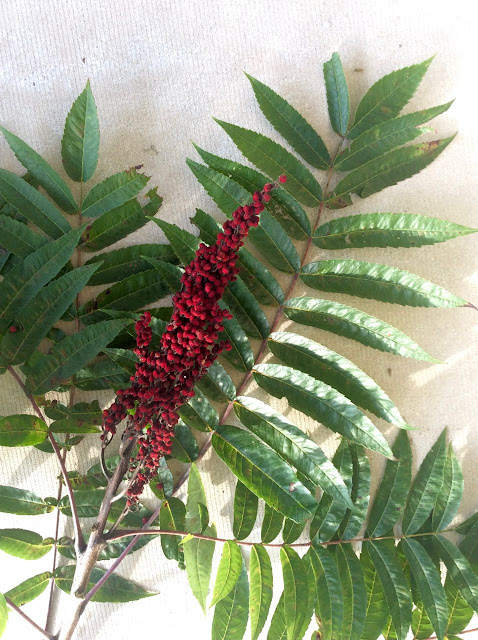 Anyway, I was delighted with my long-sought bounty. I've had in my mind that I want to make some sumac spice, ground from the berries. In fact, my desire to forage for this spice ingredient led us to plant 40 sumac seedlings last January. Whenever I spot one in our woods or along our paths, they seem to be flourishing – but I think it will be a few years before they are mature enough to sprout the needed red tops.

Back home, I set the crimson drupes (called sumac bobs) out on the porch to dry in the sun. Two days later, I work the red fuzzy seeds off the bobs' stems and throw them into the blender. My fingers are coated with a red dust that tastes remarkably like lemon. After a bit of a whirl, I dump the blender’s contents into a clean flour sifter and then sift the red powder from the yellow seeds. Voila! I’ve successfully made sumac spice. 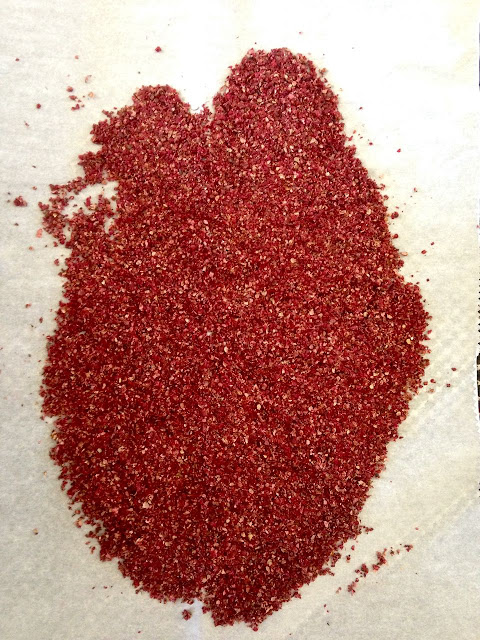 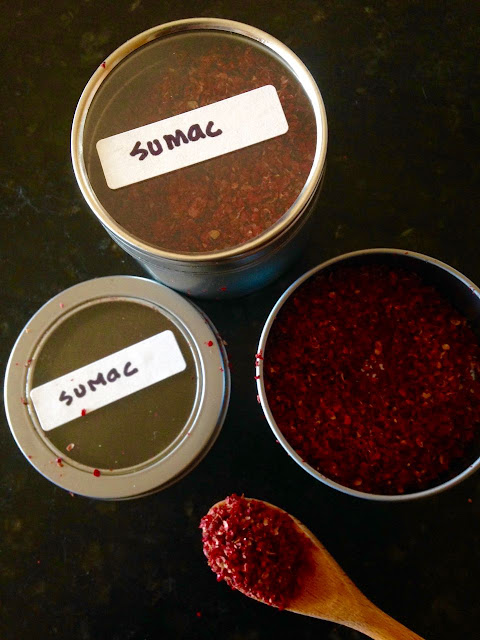 But no. I am not content with this new culinary spice that I can put on just about anything – from yogurt to fish to roasted vegetables. No, I demand more. I demand za’artar, a spice blend used throughout the Middle East. A quick search of 101 cookbooks – one of my favorite blogs – leads me to the recipe.

I dry some fresh thyme in a low oven, mix it with some toasted sesame seeds, a bit of salt and a teaspoon or two of my freshly made sumac. Not only was the finished product beautiful, but my whole house smells of thyme. 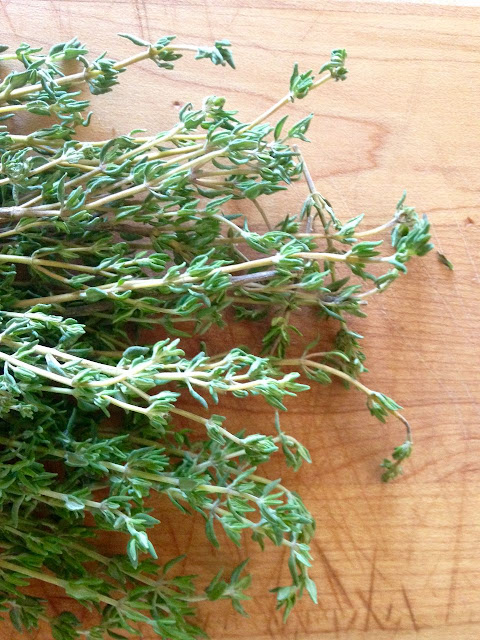 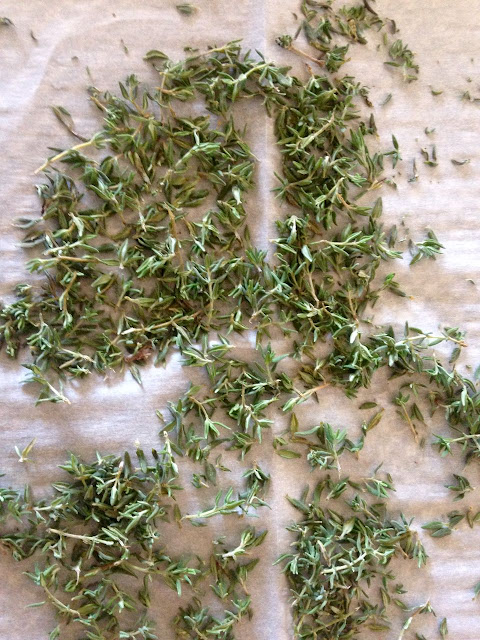 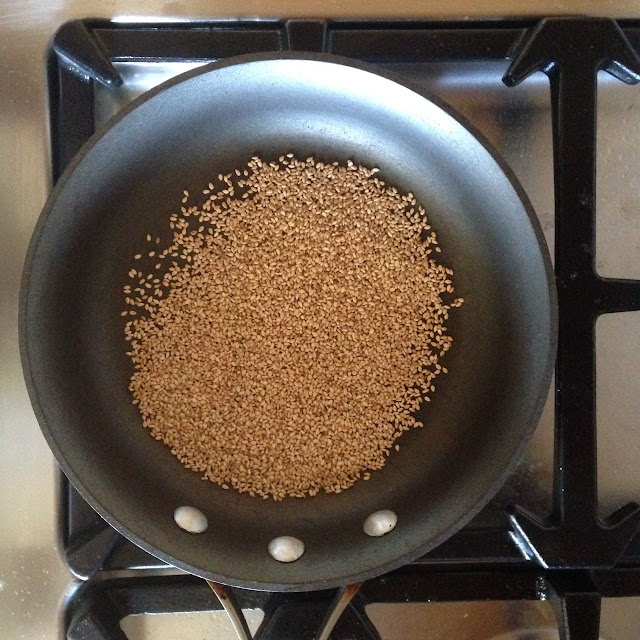 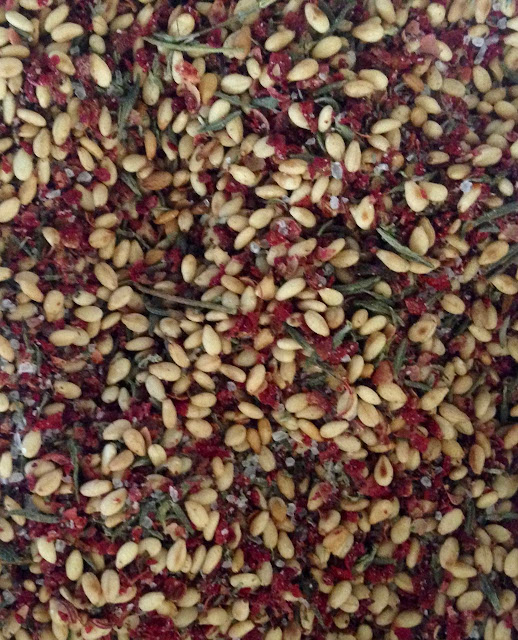 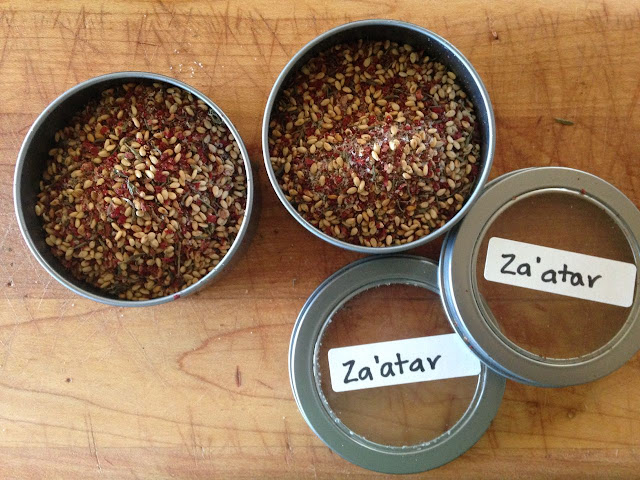 Trying to Remember that Kind of September...

I’ve been missing you. Over the past three months I’ve only blogged a handful of times, but I’ve thought of you, my readers, nearly every day. I’ll see something I find remarkable, cook something memorable, or hear something worth repeating, and I’ll think: I should blog about that. But then I find it impossible to carve out the few minutes of quiet that it takes to share these happenings with you.

Mostly for my sake, I need to be better about it. Sometimes I wonder that if I don’t blog about it, did it really happen?  You know, like the tree that falls in the forest: does it make a sound? These days I forget more than I remember, and I often refer back to my blog to confirm events that I know happened, but I can’t remember when, or the important details.

So today, I thought I’d commit to telling you about one of the most significant events to ever happen here at Farm Dover. I’ve been reliving it all week in my mind, and don’t ever want to forget a single detail, because, it gives me such happiness to recall it. 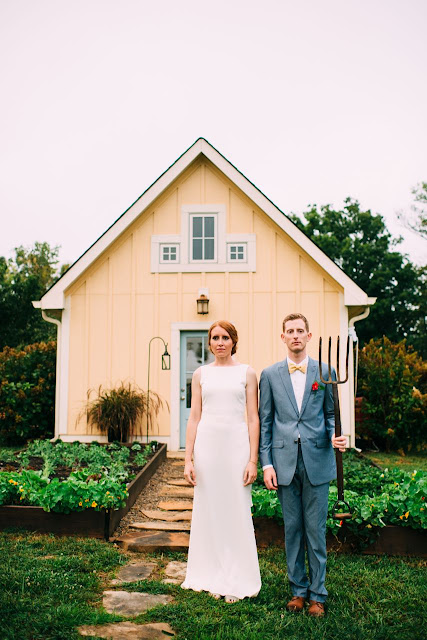 On Saturday, September 10, our daughter, Maggie, and her long-time partner, Nathan, were married in front of the guest cottage in our backyard, as those dear to them looked on and listened as they made the most serious of commitments to each other. Nate’s grandfather, Norbert, read from 1 Corinthians 13 and then offered the couple some insights about what it means to take this step. Afterwards, we celebrated.

But let me back up a bit and give you some background. Back in mid-March, Maggie and Nate asked Ed and me to meet them for Sunday brunch at a neighborhood cafe. They arrived on their bikes, with big smiles on their faces, and an engagement ring on Maggie’s left hand. (Maggie and Nate met in 2009 during Maggie’s last year of college at the University of Wisconsin and have been together ever since – although sometimes living in different cities.)

The morning after their joyful announcement, Maggie boarded a plane bound for Los Angeles for an intensive three-month accelerator program for medical startups. Before she left, she and Nate agreed that they wanted to get married at Farm Dover in the early fall and requested that I plan the wedding, keeping it relatively small and simple in nature. I could do that!

So, between mid-March and early September, life went on, but was just a bit busier. Ed and I continued to do some traveling and kept up with all the normal parts of a busy season here on the farm. From Brooklyn, Mary designed the wedding invitation and Jack came home from China in early August and went to work getting the farm “wedding ready” as well as learning some new pieces on his accordion. Maggie and Nate stayed busy with work, renovating their home, and planning with Nate’s mom and dad a night-before-the-wedding backyard dinner at their place.

And then, before we knew it, it was time. Well, actually, it was pouring down rain when it was time. So we just delayed the ceremony for a bit and instead began the reception. Soon enough, the rain let up and Jack began to play the prelude. Daughter Mary, Maggie’s maid of honor, walked down the stone path from the house, and stood with Mike, Nate’s best man and brother-in-law. Preacher Doug Slagle stood beside Nate. Once the prelude was finished, there was a pause, then Jack began playing the processional cantata. Ed took Maggie’s hand and together they made the walk down the path.

The pictures really do a wonderful job of telling this story. If you follow me on Instagram you may have seen these already. I trust you will agree that they are worth preserving here in this space. (Note: unless noted otherwise, these photos were taken by the incredibly talented Ashley Glass of Ashley Glass Photography.)

As you can see, this was an effort by lots of people who joined together to support Maggie and Nate on this, their very special day. We are grateful to them all.

Posted by Debbie Galloway at 4:13 PM No comments: