I can often be found in the kitchen brewing up an assortment of strange foraged concoctions such as milkweed or elderflower cordials, elderberry gin, blackberry syrup or various herb vinegars. Ed joined me recently, taking the lead on the latest libation: vin de noix, otherwise known as green walnut wine.

He was inspired by the main character in a detective novel. Bruno is chief of police in a small village in the south of France. He lives in a restored shepherd's cottage, shops at the local market, and makes his own vin de noix. What? Makes his own what?

Turns out vin de noix is a home decoction obtained by macerating green walnuts in wine and vodka for 40 days and then bottling it and waiting until December 1 to partake. Known since the sixteenth century for its therapeutic qualities, today it is consumed as an aperitif or digestif. Sounds like our cup of tea! 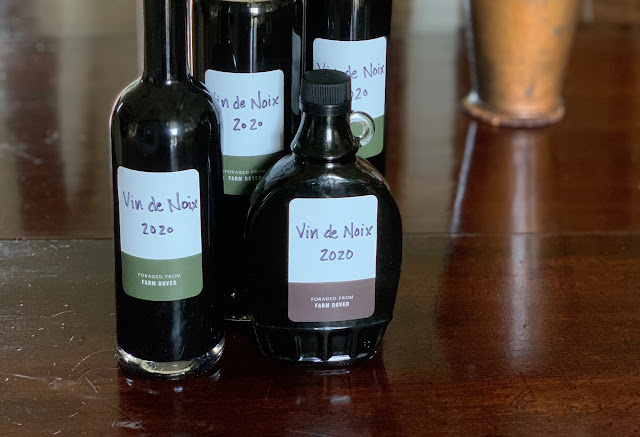 The one thing we have plenty of at Farm Dover is walnuts. We've planted a field of 100+ black walnut trees and there are hundreds (maybe thousands!) of native ones growing all over the farm. The walnuts for this recipe need to be picked while they are still green and milky with very tender kernals. In France, the green nuts are traditionally picked on the Fete de la Saint-Jean-Baptiste, celebrated on June 24.

So Ed picked the green walnuts back in late June and set to making the liqueur. For the past 40 days, the inky black infusion has been stored in a dark cabinet in our laundry room. Every couple of days, we'd give it a stir.

Turns out versions of this drink are produced throughout Europe. Italy has a walnut liquor called nocino, made with alcohol, but no wine.  And Jack's girlfriend Kasia sent me a secret recipe from her grandfather in Poland who makes a vodka-based version, that includes caramel. Next June we will put it to the taste test.

Back to our walnut wine experiment... Last week, Ed strained the walnuts out of the liquor and bottled it. Stay tuned for the uncorking on December 1. It is recommended that it be served ice cold with a mandelbrot, biscotti or buttery cookie. Especially nice in front of a crackling fire. Sounds tasty, doesn't it? 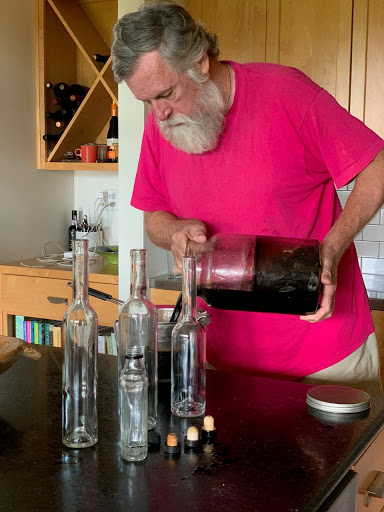 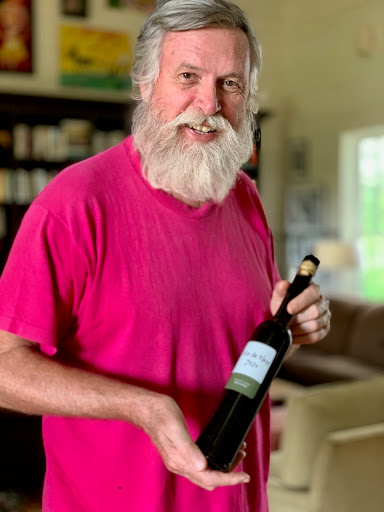 Gather the walnuts in late June when the nuts are well formed, but can still be pierced with a needle. Soak the nuts in cool water for 1  hour.  Drain, dry and quarter.

Place all of the ingredients in an non-reactive container with a lid.  Stir well to begin to dissolve the sugar.

Store in a cool dark place for 40 days, stirring occasionally.

Strain through cheesecloth into a very large non-reactive bowl or food-safe bucket. Taste, and adjust the sugar if you want the drink to be sweeter. It will be a little harsh tasting, but will mellow as it ages.

Funnel the wine into quart jars. Store in a cool dark place until December 1st. 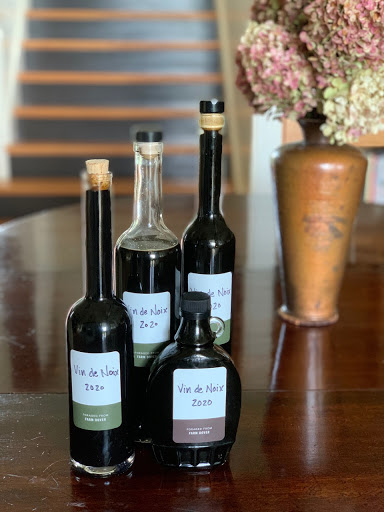 Posted by Debbie Galloway at 11:38 AM No comments:

We've been sequestered at Farm Dover for more than half a year, 23 weeks to be exact. But that doesn't mean things have come to a standstill. In many ways, just the opposite. Ed's beard grows long; the ragweed and goldenrod in our fields grow tall; and granddaughter Hazel grows up.

Back in May, we created a teepee for Hazel to play in. 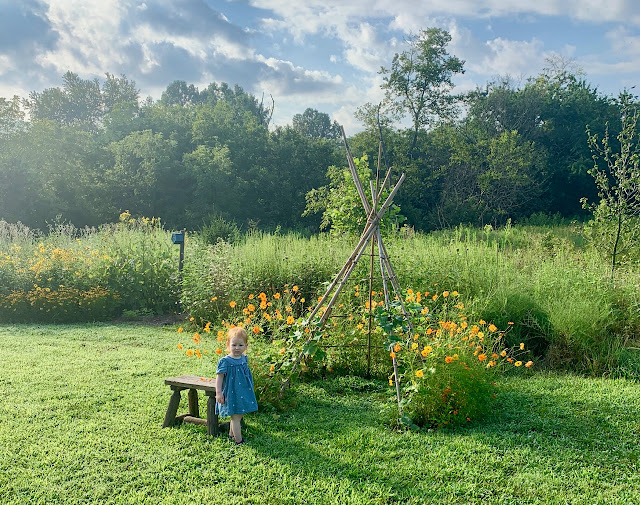 Neighbor Sandy provided the 8-foot bamboo poles, which Maggie lashed together. I cut some willow branches and soaked them in the pond before weaving them horizontally through the bamboo. 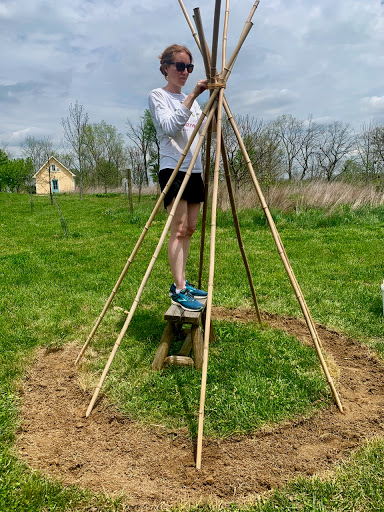 We planted some beans, cucumbers, marigolds and cosmos around the base. 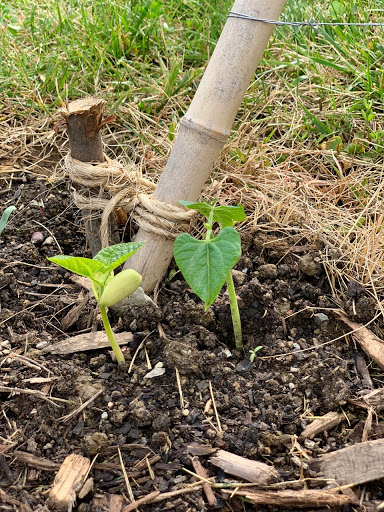 And then we watched and waited... 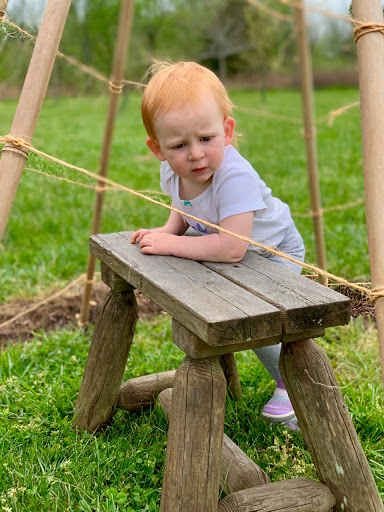 Ed (with assistance from Hazel) faithfully watered the tiny seedlings. 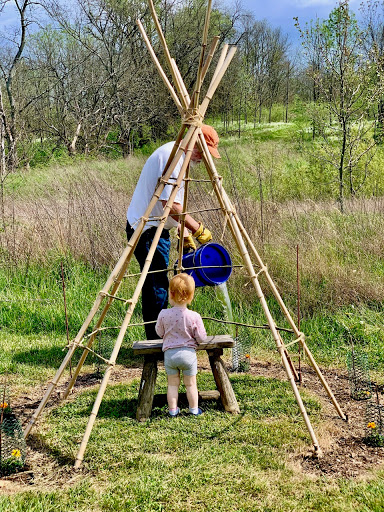 And we watched and waited some more... 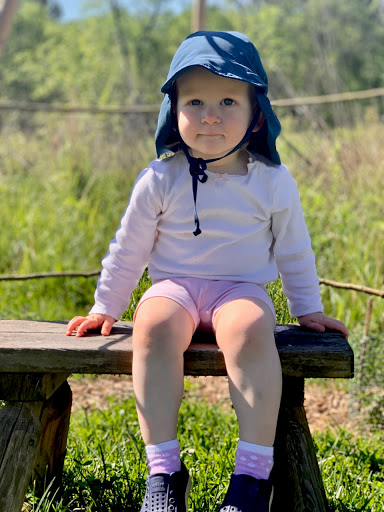 Slowly the vines started to grow. And so did Hazel.
She turned from a toddler who wobbled unsteadily as she ran to her teepee into a confident explorer of the world of Farm Dover. 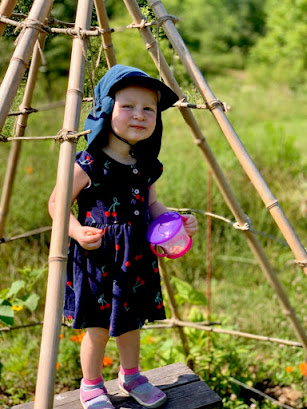 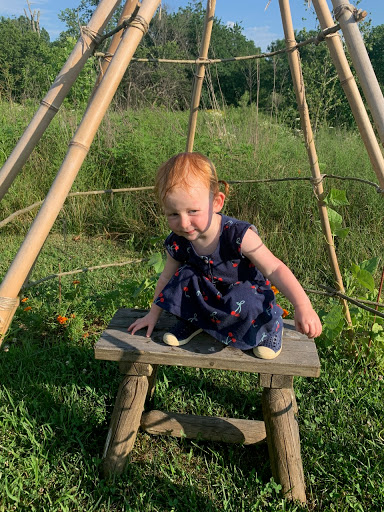 She made her teepee into her own special spot, sharing books with Roo and snacking on green beans picked from the teepee's vines. 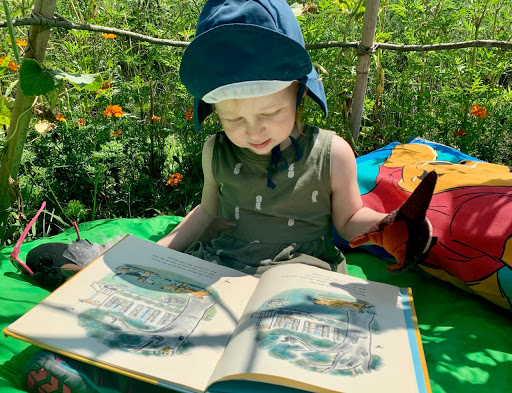 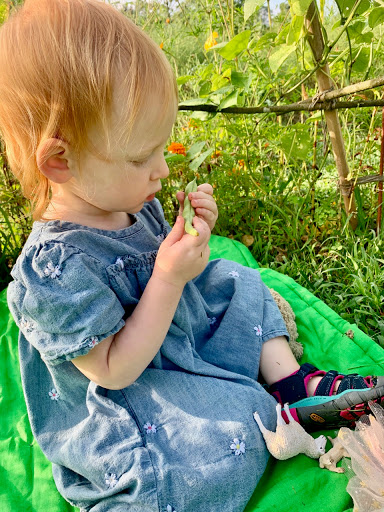 Hazel and her teepee have been a bright spot during this strange time, a reminder that life goes on. Growth continues. We all need a special place in this crazy world –  a place where we can explore and grow. A place to which we can retreat and feel safe. A place of beauty. May you find yours.... 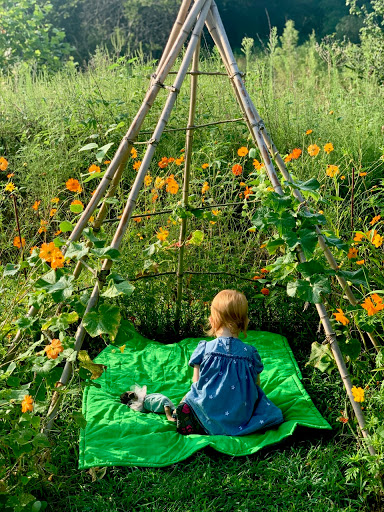 Posted by Debbie Galloway at 8:30 AM No comments: