When we travel, I'm always on the lookout for easy-to-pack, non-fragile, lightweight gifts to bring back to my beloveds. Scarves 100 percent fit this category. Our most recent trip to Vietnam, Cambodia and Thailand had me all wrapped up in scarf excitement.

The hotel where we were staying left a green-and-black-plaid krama on our bed as a welcoming gift. I wore it often over the next two weeks. I told myself that the cotton scarf added an element of chic to my plain t-shirts and helped hide those extra chins that sometimes appear in photos!

On the afternoon of our ATV ride through the Cambodian countryside, we stopped at a roadside eatery and discovered a table full of kramas for sale. Jack bought six and I bought six more. Ed rolled his eyes. Here's one of my six, modeled by Mary's dress form. Can't wait to give them as gifts – and keep a couple for myself. 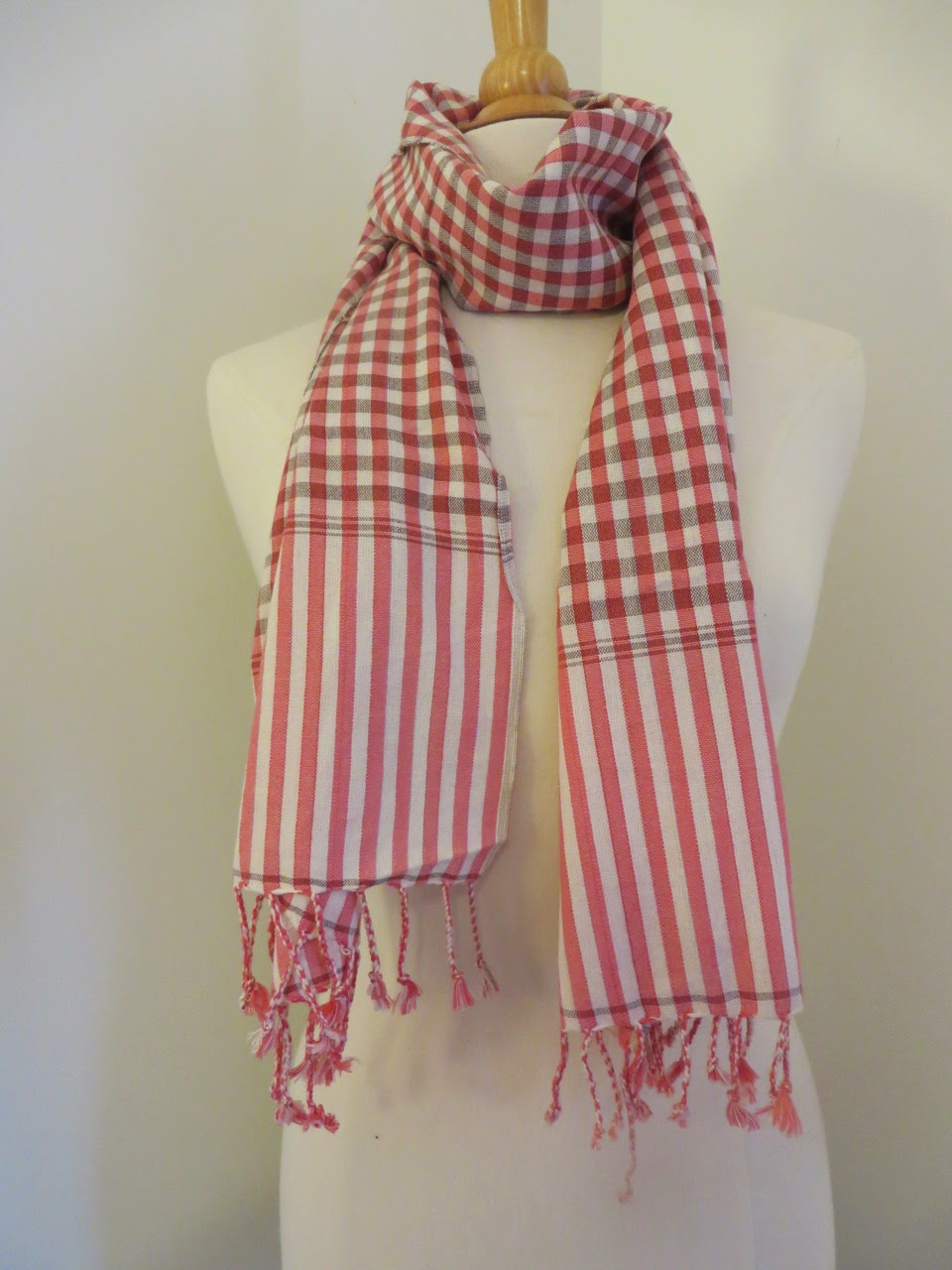 Next up was a visit to a silk workshop in Chaing Mai, Thailand.

So, of course, I had to buy a silk scarf for Maggie, Jack and Mary – and one for me too. I meant to give Jack's to him before he left to go back to China, but forgot. He assured me that he would appreciate it for Christmas 2015. 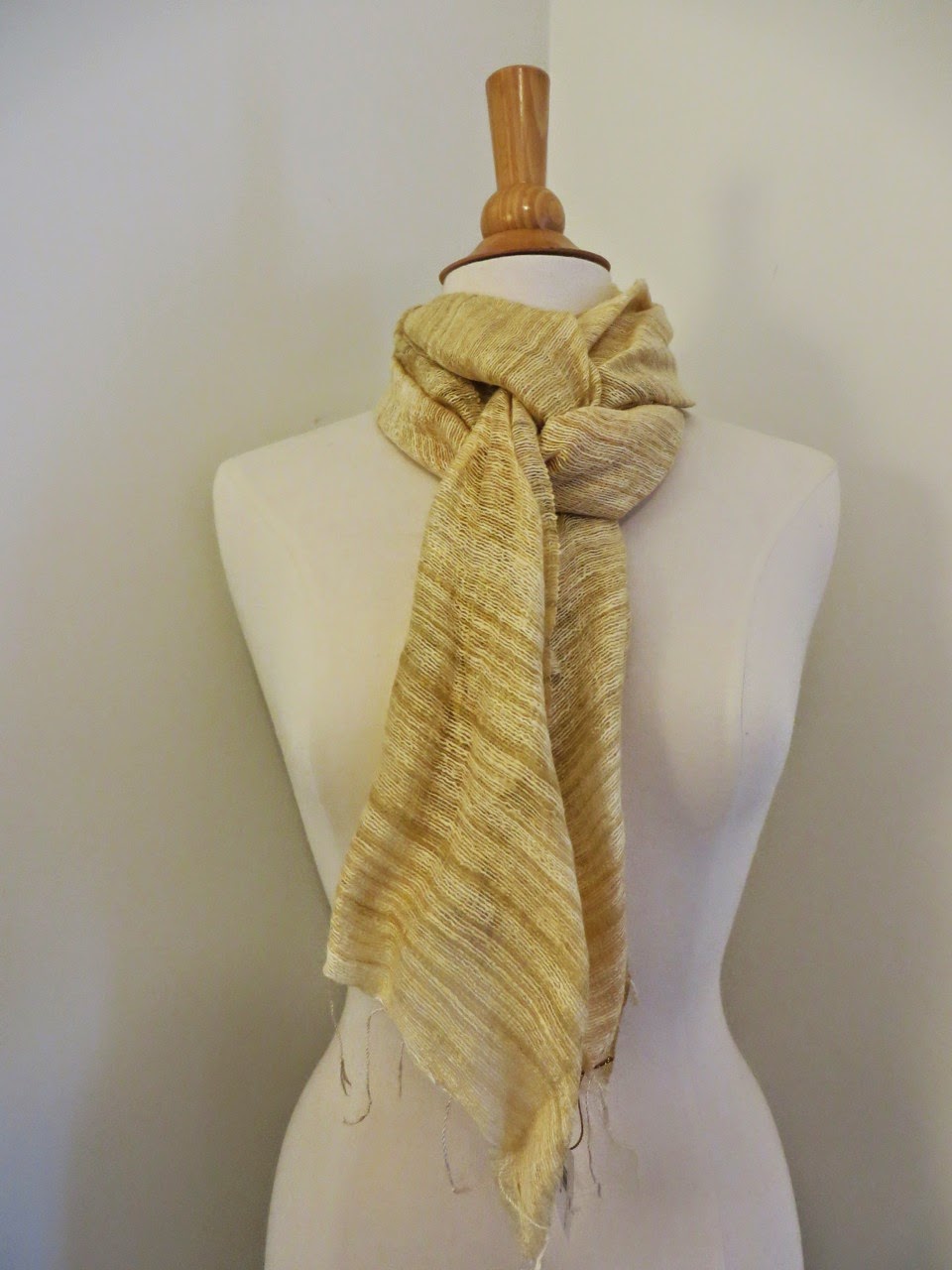 I'm only wishing I had bought a dozen more of the Cambodian scarves and a stack of the silk ones. They are all so lovely.

Next up: Unpacking my Bag, Part 3: Pottery
Posted by Debbie Galloway at 5:07 PM No comments:

We've been home for almost 48 hours. Ed is still waking up at "way-too-early" hours and then insists on an afternoon nap. Neither one of us can make it past 9 p.m.

I've unpacked my suitcase and started a load of laundry. I saved my carry-on bag to unpack with you. I wanted to show you some of the souvenirs that we brought home from our travels to Vietnam, Cambodia and Thailand. 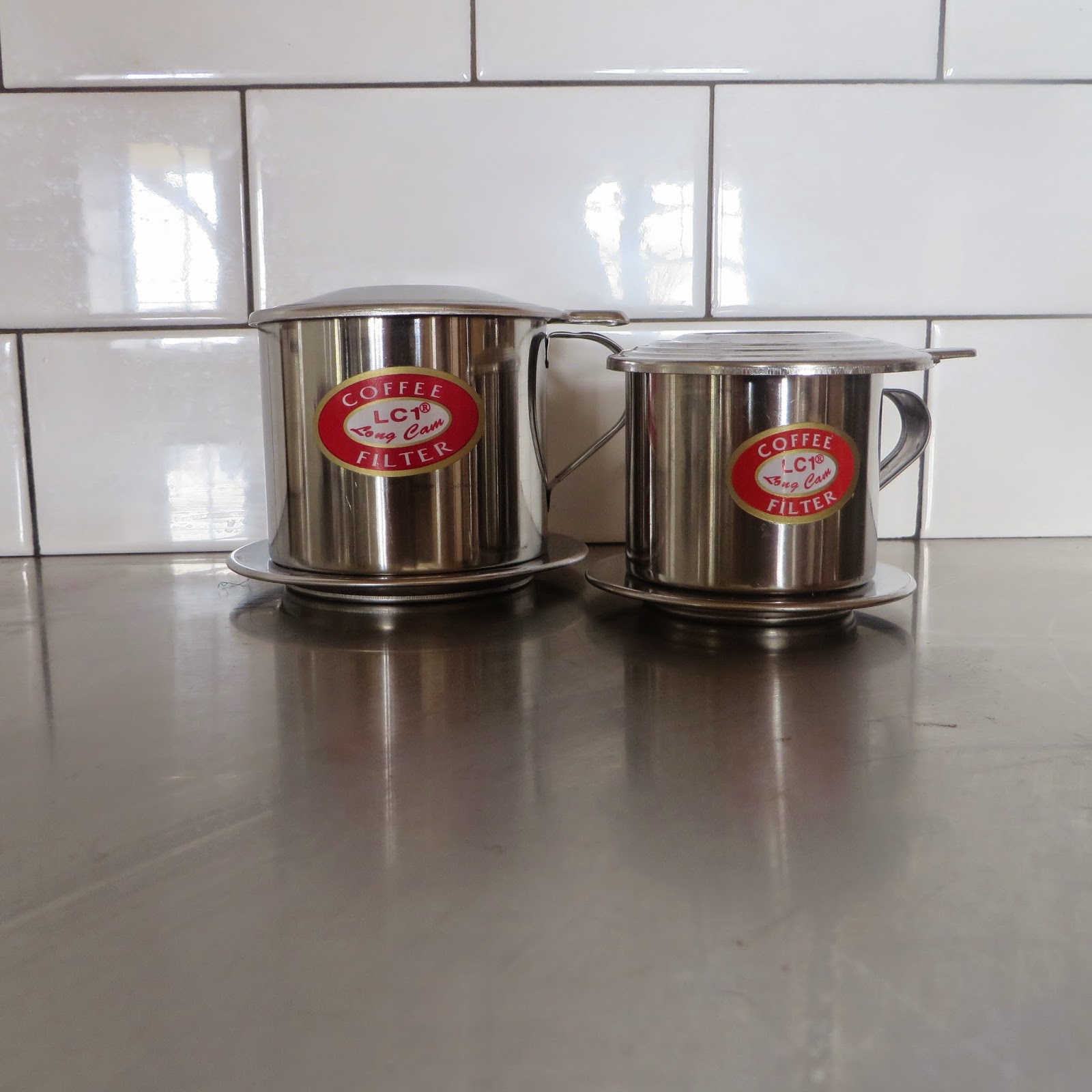 Coffee drinking seems to be the national pastime in Vietnam. And I'm not talking about Grande Skim Lattes from Starbucks. I'm talking about tiny cups of super strong French roast coffee cut with super sweet condensed milk, served at luke-warm temperatures or poured over ice. Vietnamese coffee: It takes some getting used to.

Coffee was introduced to the Vietnamese by French colonists in the late 19th century. Because of limitations on the availability of fresh milk, the people of Vietnam began to use sweetened condensed milk with a dark roast coffee.

The last afternoon we were in Hanoi, our guide took us to a Trung Nguyen coffee shop and insisted that we try a cup of Legendee -- otherwise known as weasel coffee -- brewed with a single-cup filter. The legend in Legendee coffee has to do with stories about natives who drank a brew from coffee beans that had been partly digested by civits, small furry animals similar to a weasel. Their poop was collected and the beans separated out and brewed into civet coffee. I kid you not. Trung Nguyen, the largest domestic coffee brand within Vietnam, eventually found natural enzymes that duplicate this process and leaves the weasels to blissfully go on their way. 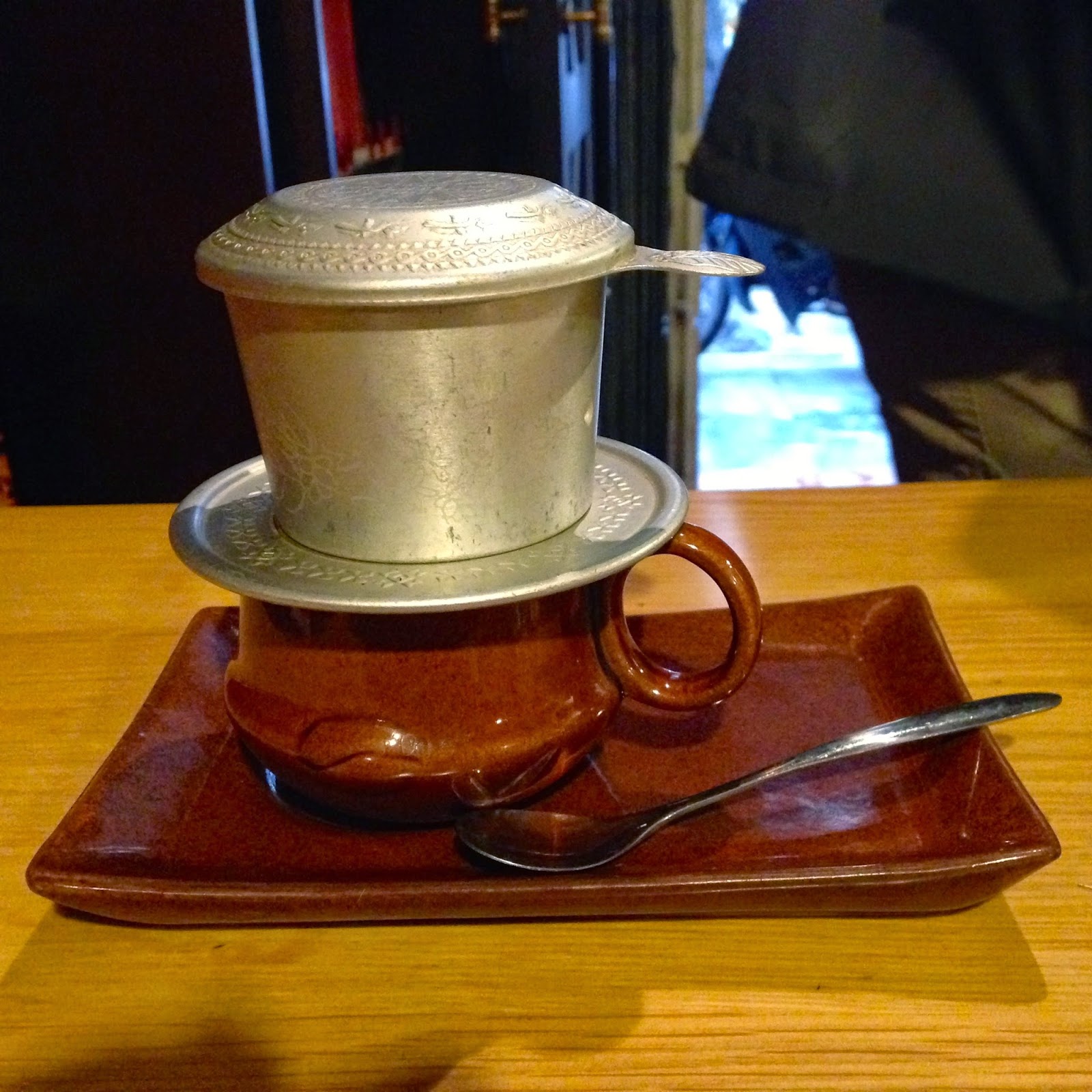 Anyway, to make a long story short, we tried a cup of Legendee and bought a bag of Trung Nguyen French roast coffee and headed on our way south in Vietnam. Along the way, I purchased two of the aluminum coffee filters at local markets so that I could replicate our coffee experience once we were home.

Last night before going to sleep I was flipping through a Martha Stewart Living magazine that arrived while we were gone and sure enough, on page 20, there was Martha extolling the deliciousness of Vietnamese iced coffee, made with Trung Nguyen coffee and little metal coffee filters. I am so ahead of Martha.... 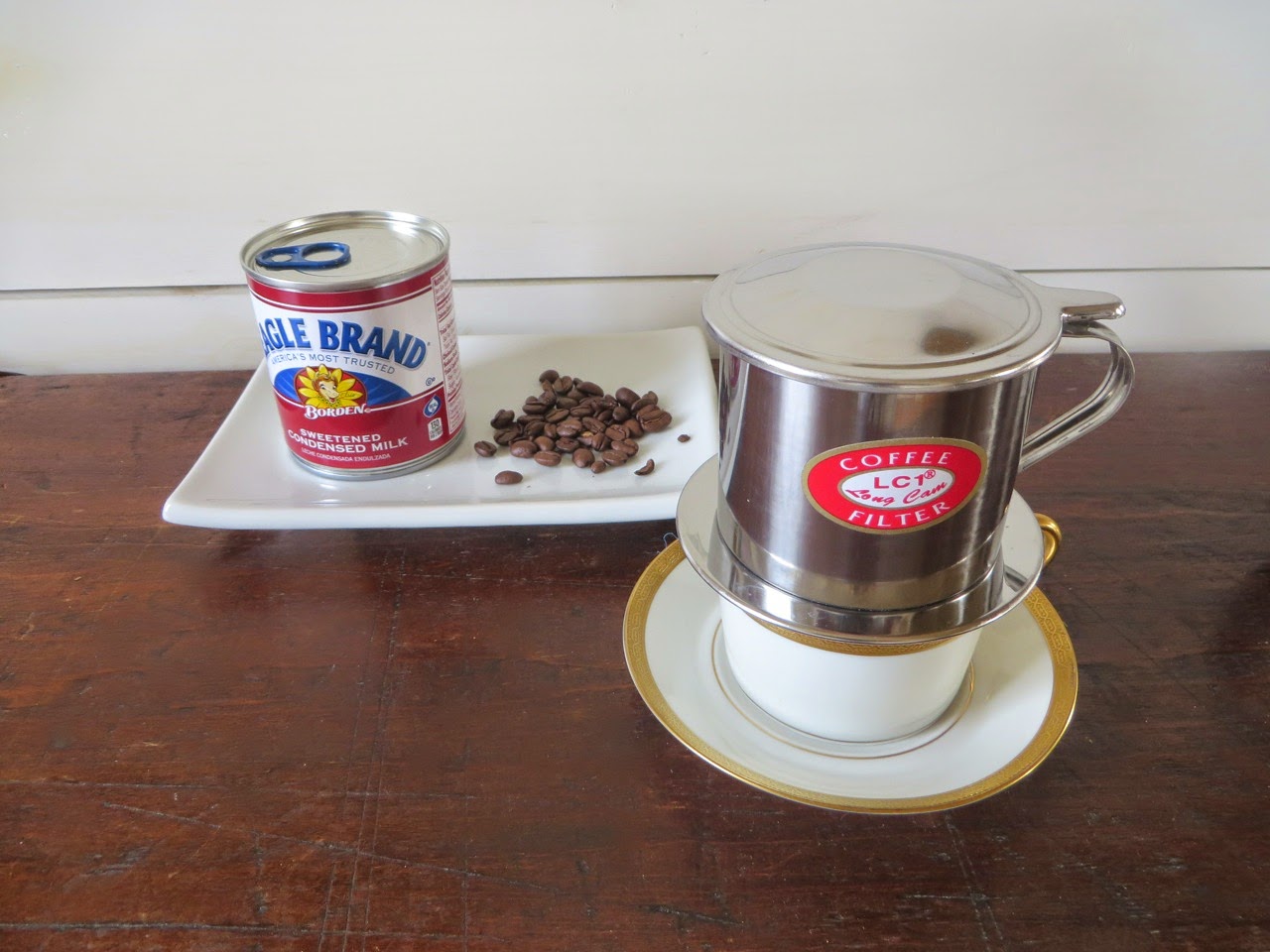 ingredients
Note: the coffee and metal filter used for this drink are available at trung-nguyen-online.com, or you can come out to Farm Dover and I'll make you one.

Next up: Unpacking my Bag, Part 2: Scarves

Posted by Debbie Galloway at 1:39 PM No comments:

We are back home. Been away for thee weeks experiencing a slice of life on the far side of the globe -- Vietnam, Cambodia and Thailand. Being immersed in all things Asian, a certain amount of Eastern philosophy has seeped into my thinking: witness my contemplation of the yin and yang of my life. 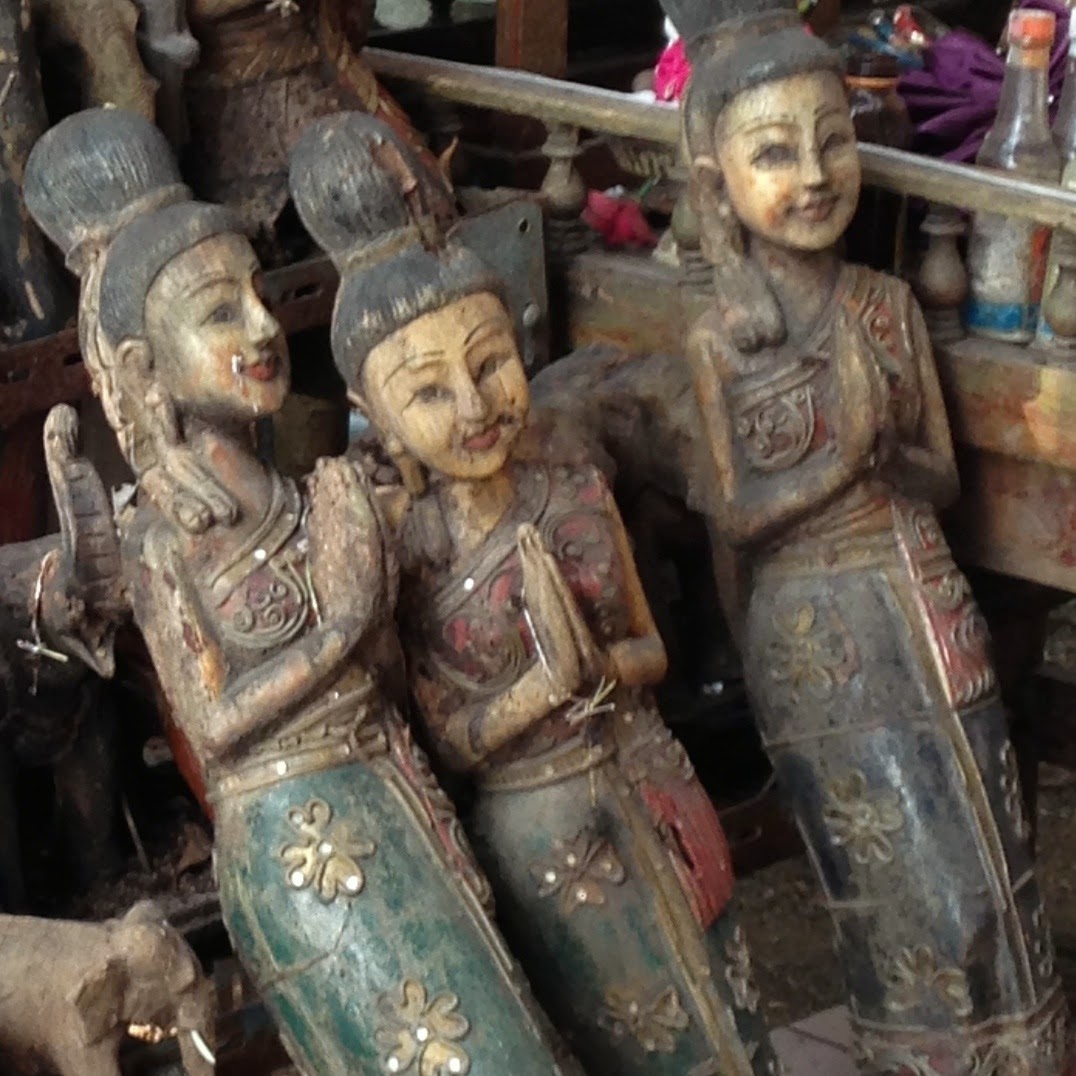 At no time is the contrast in how I live my days more pronounced than when I travel and then return home. At Farm Dover, Ed and I live quietly and comfortably, in simple abundance, going about our lives with a routine that varies only by the season. Suits us fine. As my mother liked to say: I wouldn't change a thing.

Oh, but when we travel, life does change. We seek out the unfamiliar, the uncomfortable, the strange, the risky, the spicy.

On just this most recent trip, we ate assorted street food (and survived), helped plant banana trees, sat on a hut floor with four generations of women and assembled sticky rice bundles wrapped in banana leaves, kayaked through caves to sparkling blue lagoons and later through dark and mucky mangrove swamps, learned to cook crispy pancakes stuffed with shrimp and pork, rode ATV's through the dusty Cambodia countryside, taught a class at a rural primary school, received a chanted blessing from a Buddhist monk, rode atop an elephant through the jungle, and lounged by the pool at the Peninsula Hotel while sipping fancy drinks. All incredible experiences; all so vastly different from my ordinary Shelbyville life.

It is this contrast -- this yin and this yang -- that keeps me in balance. It is what makes me delight in coming home -- happy with my days and nights spent tending to all things Farm Doverish -- but also excited to pack my bags and seek out what the broader world has to offer. Both complementary forces are essential to me. I crave them both: the comfort of home and the adventure of travel. It is this application of duality that feeds my well being. Home is my yin; travel, my yang.

How about you? What keeps you in balance?


Posted by Debbie Galloway at 11:06 AM No comments:

Living High, Low, and In-between on the Hog

From time to time, Ed and I would get some heritage pork from The Mayo Lane Market Wagon and were impressed by how much better it tasted than supermarket pork. We decided to go "whole hog" and purchase our very own pig. It was expensive, but not so high that we had to go into "hock."

Just before the new year, Ed and I drove down to Bardstown to pick up our hog. I say our hog but really it is just half of a hog and it had been neatly processed by Boone Butchers – shrink-wrapped to our specifications and labeled, ready for our freezer. We took the pickup truck and every cooler we owned. Our friends, Lynn and Walt, bought the other half, which we delivered to their door. 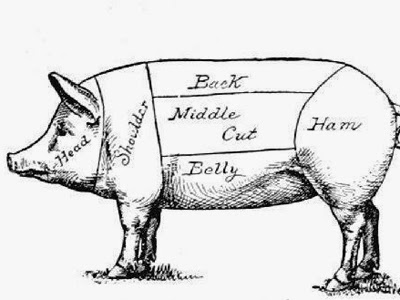 Our hog was a heritage breed, pasture-raised on Four Winds Farm, just outside of Frankfort, KY. She was born in the spring and weighed in at 237 pounds when she wiggled off to the market in December. I'm sorry to say I don't know much more about her. I would have liked very much to have met her. I understand that she had a nice life, roaming freely around with only a handful of other pigs and allowed to root and forage to her heart's content. She had a nice bedded pen for sleeping and ample wallows. She wasn't pumped full of antibiotics and growth hormone, but allowed to grow at her natural rate, without tight confinement. She basically lived in "hog heaven."

It took half an hour to unload and organize the packages in our freezer. It is a lot of pig -- and really, most of the time, I'm only feeding Ed and myself. We "wee wee" can't eat 100 pounds of pig, so, if you are invited to dinner at Farm Dover anytime in 2015, you can pretty much be sure that pork will be on the menu.

We are looking forward to enjoying the taste difference between our humanely raised pig and the factory-farmed pork we buy at Kroger. Heritage pigs are known for their flavor, tenderness and juiciness. The meat is pink-hued and heavily marbled. It doesn't need to be cooked to death, but can be safely served slightly pink. Each hog yields about 33 pounds of fat, compared to about 10 pounds from industrial-raised hogs. Ed still talks fondly about the pork roast his mom used to make.  And his dad used to cure country hams for sale at the Galloway Market in Owensboro. It's a high standard to "meat."

Tonight's dinner features pork chops. Maybe bacon tomorrow morning. One of these days soon, I'll figure out how to render the leaf lard for use in biscuits and pie crust. Anybody want the leftover cracklings? I'll report in from time to time on this experiment. Hope I don't "boar" you. "Lard" almighty, wish us luck.
Posted by Debbie Galloway at 5:29 PM 1 comment: