While 4/5s of our family was living it up in New Orleans last week, Jack was off on an adventure of his own. He had a couple of weeks off from his teaching job for the Chinese New Year and took off with friends to Taiwan. (Yes, he was there when the recent deadly earth quake struck, but fortunately, was 200 miles from the epicenter.) From there, he travelled alone to Burma (Myanmar).

I thought you might like to see some of his photos. I think they are quite good -- but, then again, I am his mother... 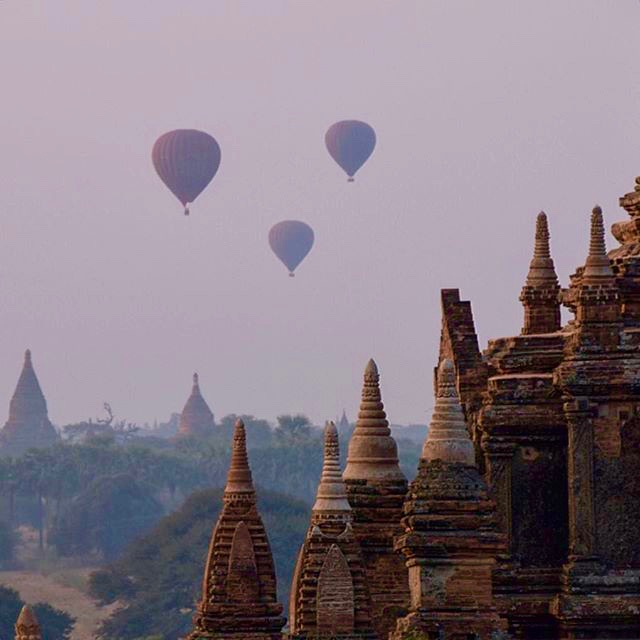 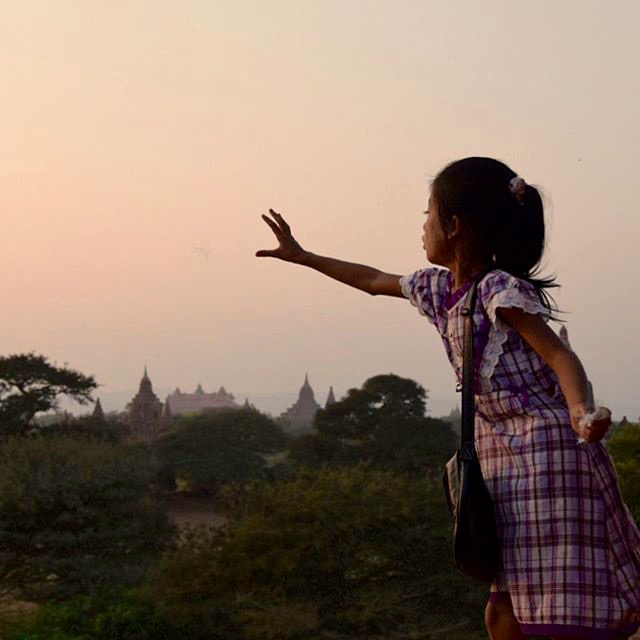 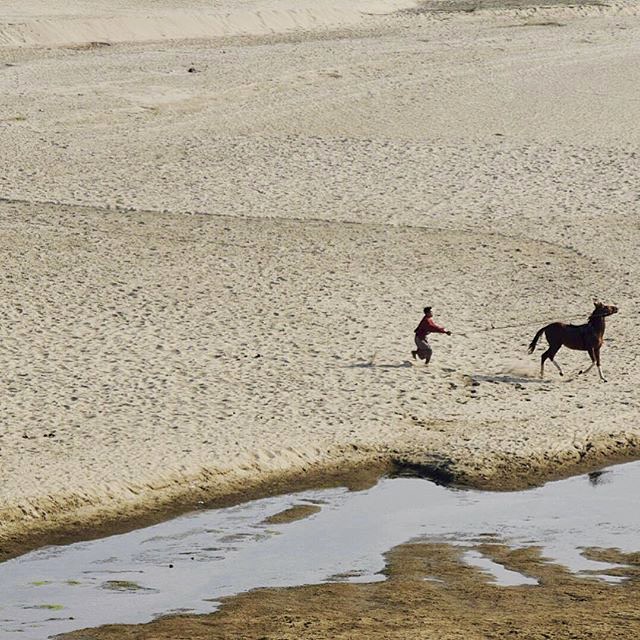 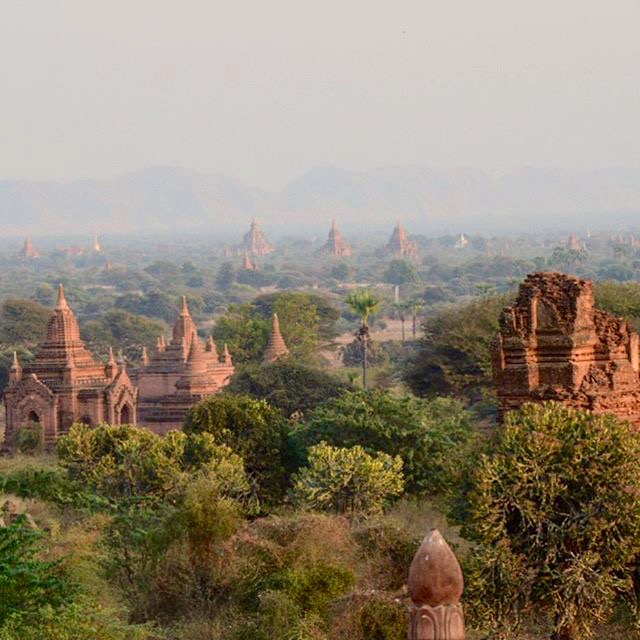 Posted by Debbie Galloway at 5:45 PM No comments:

A Swing Through the South

Ed and I have been off on one of our road trip adventures; it started with a few sunny days of fishing at the Juniper Club (which I have written about before: here, and here), followed by a quick overnight stop in Destin to visit with my Godmother, and then on to New Orleans, where we met up with our girls. Making our way home, we took the slow and scenic Natchez Trace Parkway from Natchez, MS almost to Nashville, TN.

Just to capture the highlights...

It's always great to get to Juniper, one of my favorite places in the world. The sky was blue; the fishing good; the live oaks dreamy; and as an added bonus, we saw (fairly upclose) a beautiful bobcat making his way down the gravel road. Where is my camera when I need it! 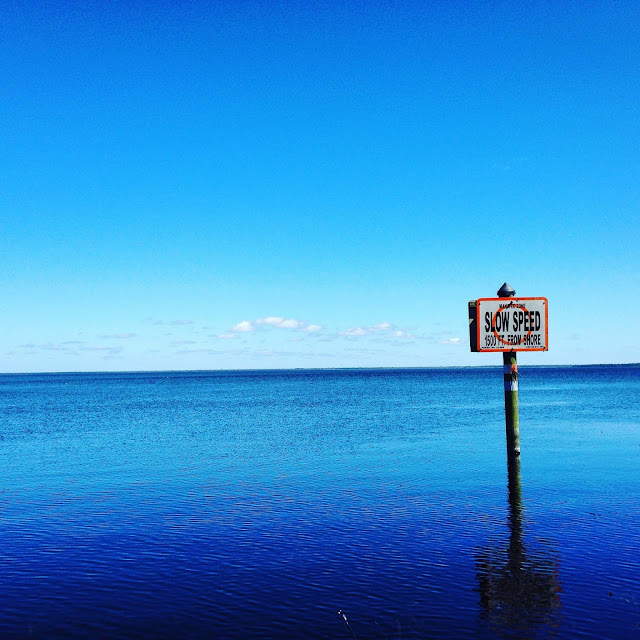 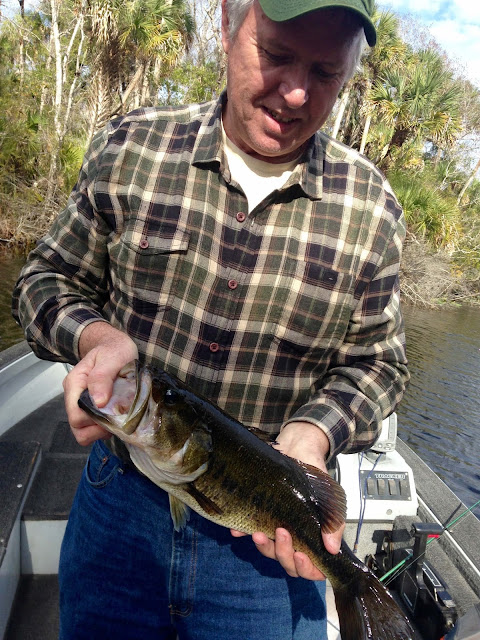 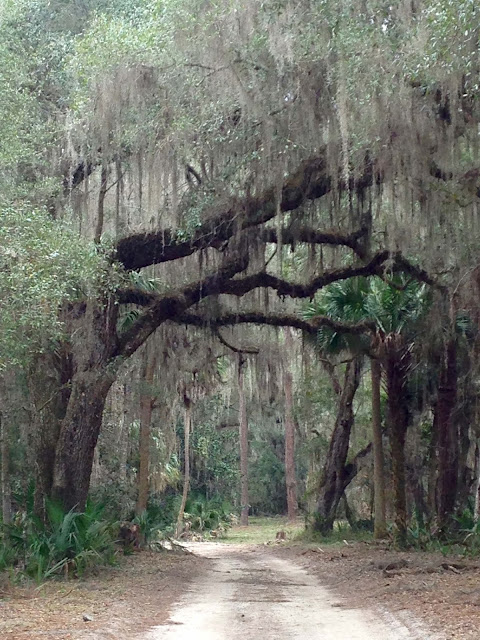 We left Juniper on Wednesday and headed to New Orleans, making stops in Apalachicola for lunch at Boss Oysters, a visit with Margie in Destin, and a tour of the USS Alabama in Mobile Bay. 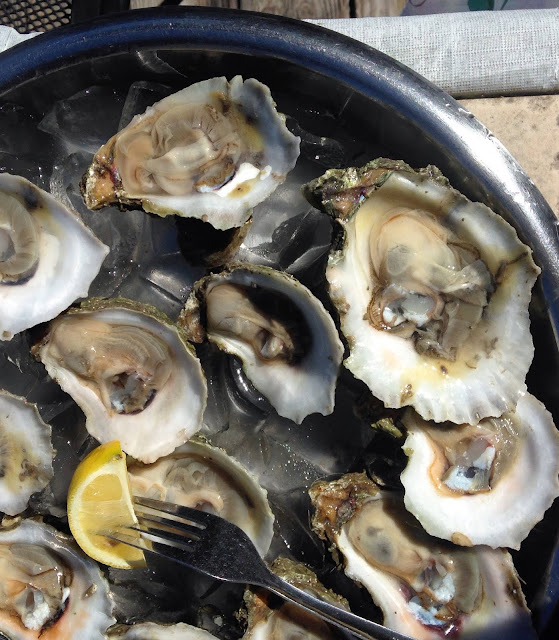 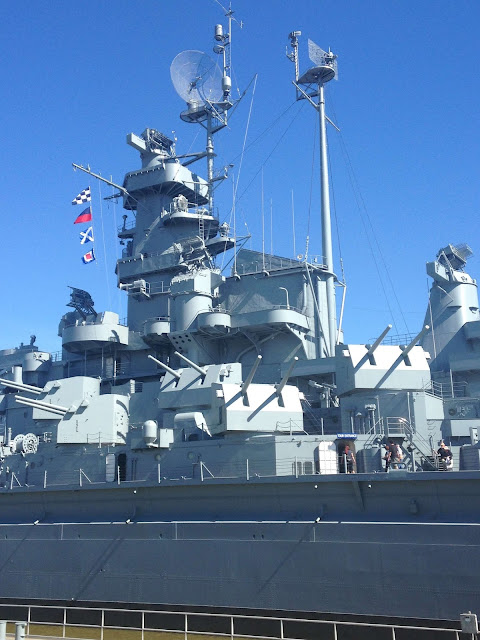 We arrived after dark in New Orleans and hotwired a hotel in the Garden District. It was lovely, as was the walk down Magazine Street to Coquette, where we sat at the bar and began our food odyssey. 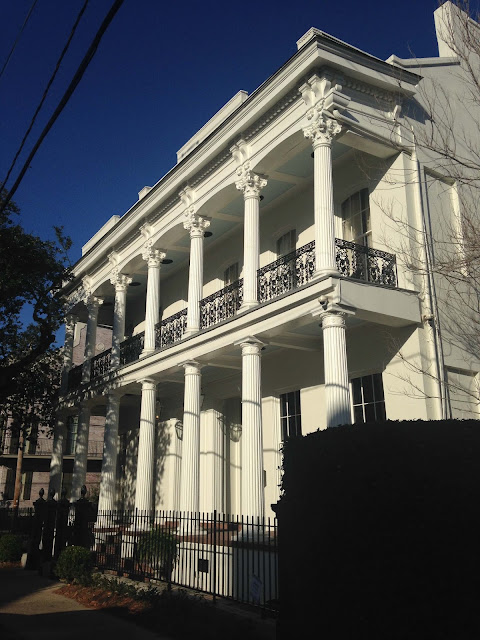 The next morning found us at the National World War II Museum and it was phenomenal – definitely worth a morning or even longer, even if you are not a history buff.

From there, we made our way to Couchon, where we caught up with daughter Mary, who had flown in from NYC that morning.

We checked into our Bourbon Street hotel and spend the afternoon walking around the French Quarter. I had never been to New Orleans and I have to tell you, the French Quarter is an introvert's worst nightmare: too many people, too much mid-day drunkedness, too many sounds and strange people to take in. This isn't to say that we didn't have fun – but most of it was away from the Big Easy's most famous streets.

Maggie got in late on Friday night and came directly to the cozy uptown restaurant, Gautreau's, where we were having the most lovely dinner. I now was with two of my three children and my husband, eating duck confit and drinking a New Orleans original Sazerac.  If Jack had been with us, it would have been perfect.

Saturday morning we were up and out early, standing in a quick-moving line for chicory coffee and powder-sugary beignets at Café du Monde, while being entertained by street jazz musicians playing the old standards. 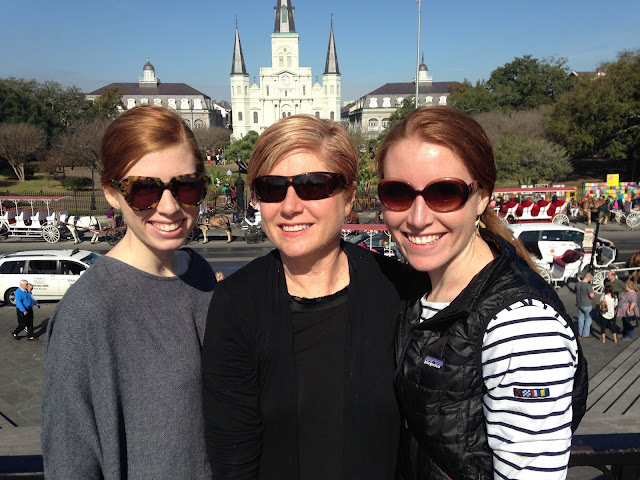 To work up an appetite for lunch, we walked over the to St. Louis #1 Cemetery and learned about the strange burial rituals of a city that is slowly sinking. Then it was back to the French Quarter for lunch at Felix's Resturant and Oyster Bar: crawfish, gumbo, raw oysters, wood-roasted oysters, fried oysters. Really messy, but great fun.

Ed headed back to hotel to catch up on ballgames and the girls and I headed straight to the Audubon Butterfly Garden and Insectarium. Not sure it is everyone's cup of tea, but we three loved it. 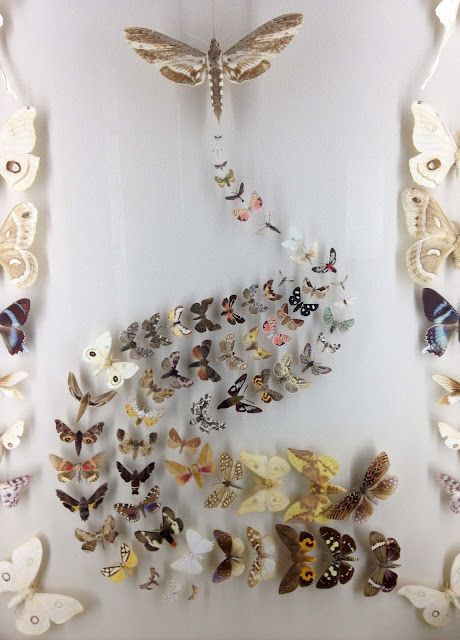 We then met up with Ed, called an Uber, and headed out of the mayhem. Mary had this idea that we should go to funky wine bar in the Bywater neighborhood. It was a great idea. While Maggie and Ed scouted out a table, Mary and I selected a bottle of wine and two hunks of cheese. We were given our open bottle and a number, and made our way upstairs, stopping to pick up four wine glasses. Shortly, a waiter appeared with our two cheese selections arranged on a platter with sour dough bread, pecans, and fruit chutneys. As the sun went down, we kicked back and enjoyed ourselves. Good call, Mary! 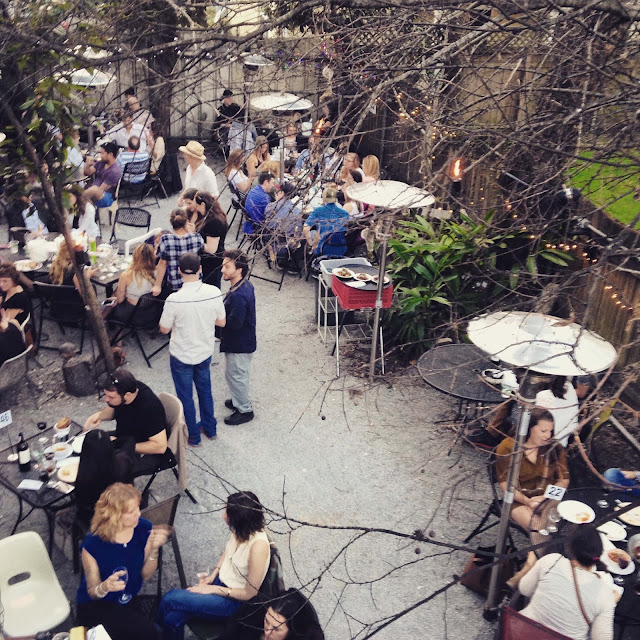 From there, we rallied for dinner back in the French Quarter at Galatoire's. I loved it that Ed had to don a sports coat to be seated. The place felt like it probably hadn't changed much since it opened in 1905; the service was excellent, but truth be told, we were just not up to another fancy meal. Still, I'm glad we went.

Sunday morning, we went to First Presbyterian Church and then on to brunch at Patois in uptown and then a little afternoon shopping along Magazine Street, back in the Garden district. (Yes, Maggie did the entire weekend, without complaint, using a crutch – as she was recovering from a tumble down some stairs.) 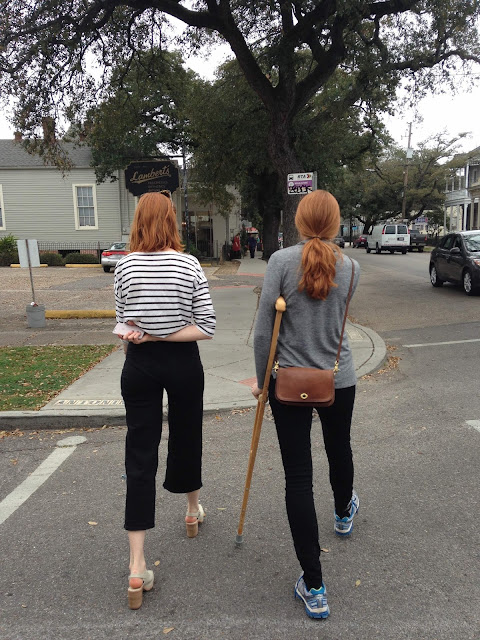 All good things must end, and so it was that we dropped the girls at the airport and we headed home. I'll tell you about our adventures along the Natchez Trace Parkway in my next post. All this writing about food is making me hungry. I'm off to the kitchen to try to recreate a dish that Mary had at Patois: Southern cauliflower hash. Wish me luck. 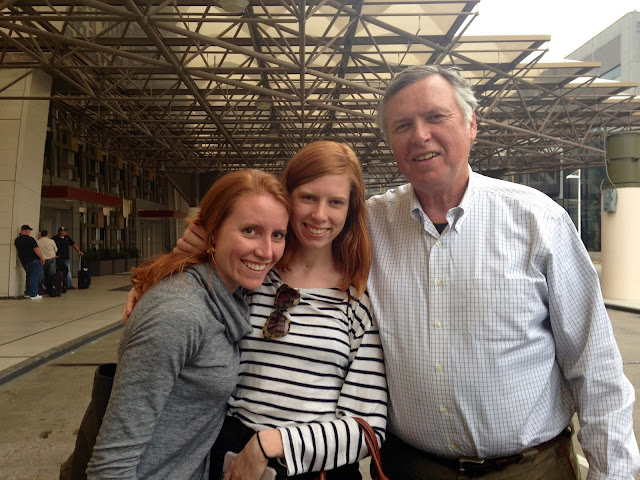 Posted by Debbie Galloway at 4:49 PM No comments:

Celebrating the Year of the Red Fire Monkey

Today marks the Chinese New Year, the year of the Red Fire Monkey. I only know this because Jack (who lives in China) let us know that he would be traveling with friends to Taiwan and then on to Myanmar for the Chinese holiday.


I also was aware that it was the Chinese New Year today because our Chinese friend Shoating (aka Ting a Lin) sent us a wechat message this morning that included a virtual red envelope with 5.20 yuan of lucky money (about $.79) that is to be deposited into our virtual wallet. Thank you Shoating. What a thoughtful gesture!

Evidently this giving of money in a red packet is the thing to do when celebrating the Chinese New Year. It is a way of sending good wishes and luck. Wrapping money in red paper is hoped to bring happiness and blessings to the receivers. Oddly, the red packet is called  yasui qian, which means "suppressing ghosts money." Those who receive a red packet are wished another year negotiated safely and peacefully.

So this afternoon, I prepared a New Year's red packet for Jack and tucked it into a red Valentine's card. I love this mixing of cultures. But both messages are meant to let Jack know that we love him and wish him great happiness and blessings in the coming year, negotiated safely and peacefully. 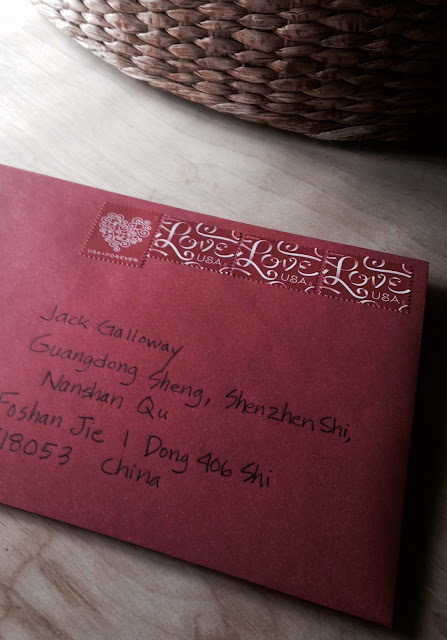 Happy Year of the Red Fire Monkey to all – especially to Jack and his friends in China.


Posted by Debbie Galloway at 3:12 PM No comments:

Even in the middle of winter, there is a long list of Farm Dover outdoor projects that need attending to. This weekend's efforts centered on birds and bees. No, this didn't involve a discussion of where babies come from. Rather, it entailed figuring out how to spiff up the beehives and clean out the bluebird houses.

Almost two years ago, Mary and I spent a week in Paris with Sister Julie and Niece Sarabeth. While there, I was on a quest to find those blue enamelware house numbers that appear on every home in Paris. We finally found them in the hardware-store heaven of the BHV Department Store (basement level) on the Rue de Rivoli. I bought numbers 1 thru 6. They were expensive – but cool – and I had a plan.

Flash forward two years. Today, the numbers went up.  Now, each of our beehives has a home address, in the hopes of making it easier to keep track of their health and honey output. 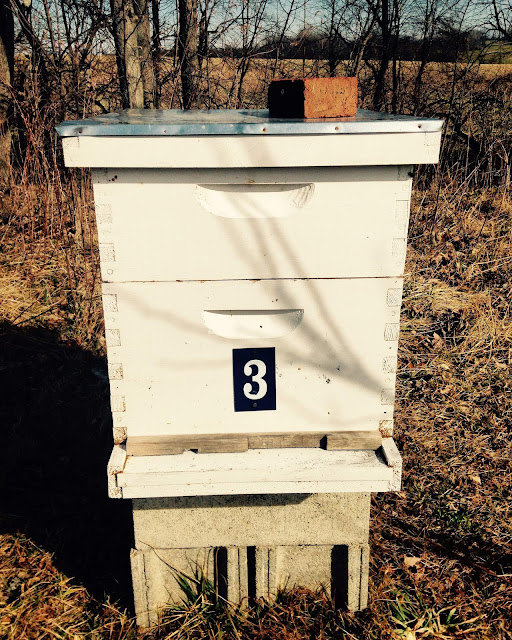 Tacking the numbers onto the front of each hive was simply not going to happen in the warmer months as the resident bees would have been too curious (and probably none too happy) at the hammering that was required. But this morning, we stuffed a bit of cloth in the small winter opening of each hive and quickly tacked up the appropriate number. (Numbers 1 and 2 and 6 are reserved for future hives that will be installed this spring.) 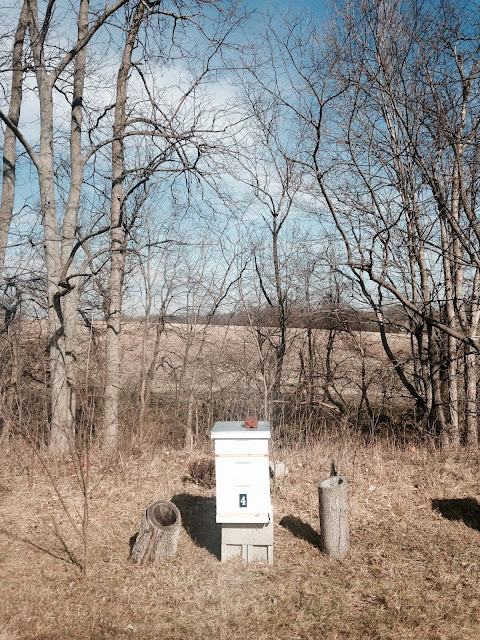 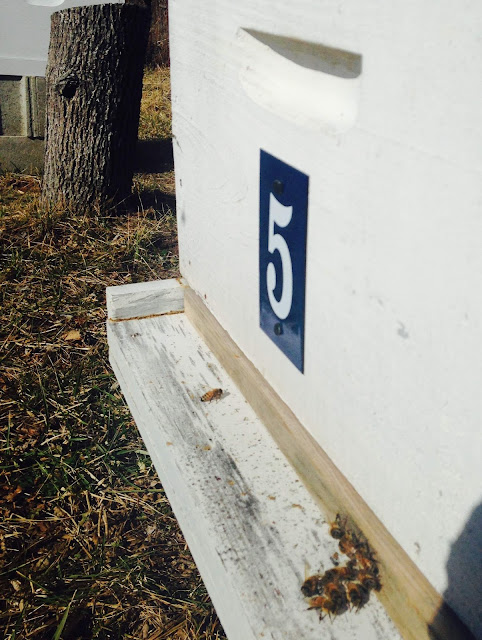 To make up for the loud hammering, I fed each hive a jar full of bee tea, a concoction of herbs, sugar and honey designed to ensure that they will have enough to eat until the first locust trees flower in the Spring. The bees seemed happy -- with both the sweet treat and their new house numbers. 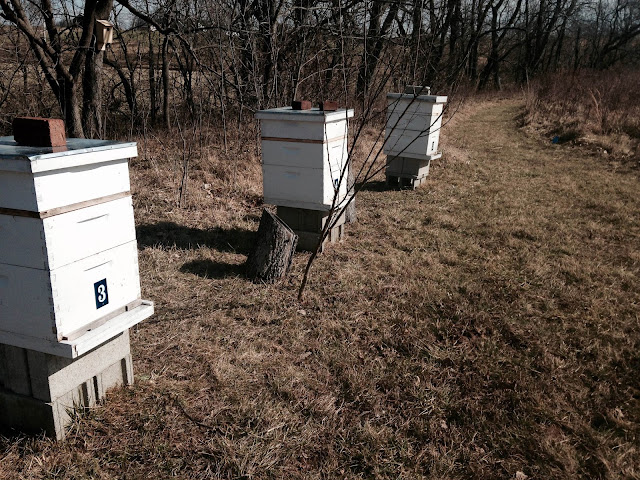 Meanwhile, Ed has been cleaning out old nests in our four bird houses, getting them ready for Eastern Bluebirds to set up housekeeping this Spring. Next up will be to clean out the owl house. 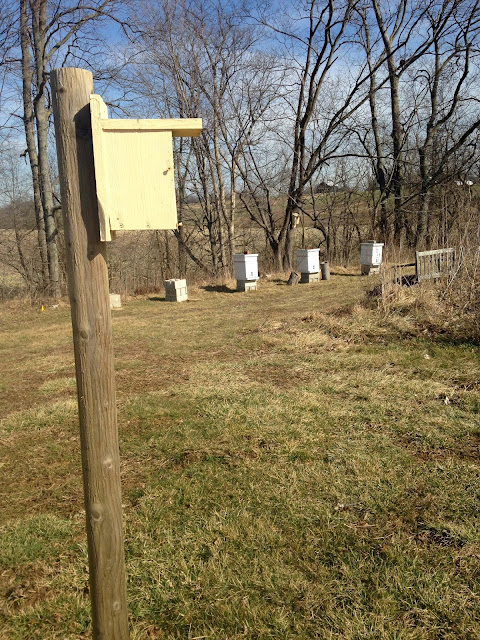 In other bird news, we had the idea that we should put out bird seed in a shallow bowl in hopes of attracting more winter birds. Instead of birds, look who showed up. 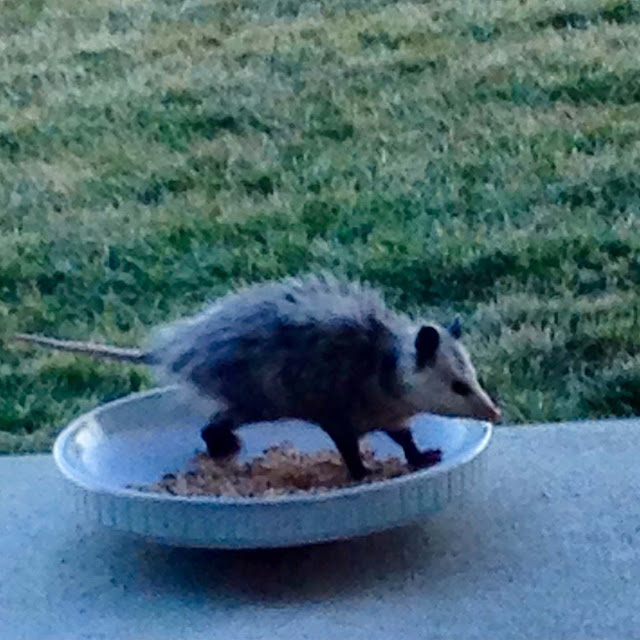 Posted by Debbie Galloway at 6:43 PM No comments:

I did what I always do when I'm confused, lonely, or frightened.
I disappeared into the kitchen.
– Ruth Reichl


If you read this blog on a regular basis, you know that I occasionally post recipes. I do this for a number of reasons:

I made it last week and liked it so much I'm making it again today so that I can share the recipe with you. Even my "non-cooking" friends can manage this one. Super easy and incredibly delicious. Crispy and creamy. Zesty and sea salty. Roasted, not fried. What could be better? 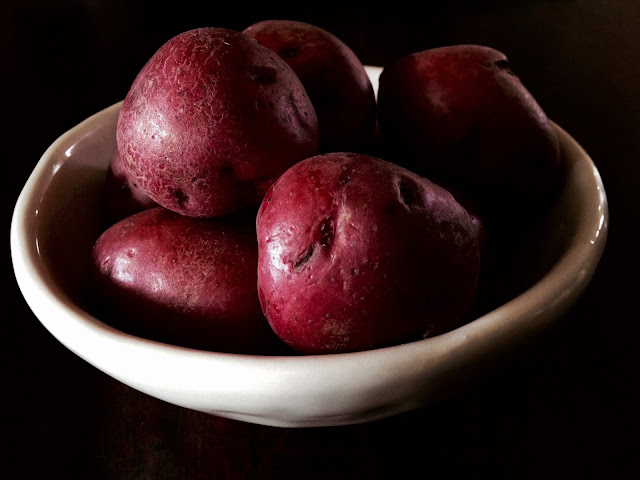 Here's the back story behind the recipe. For my birthday, friend Patrice gave me a copy of Ruth Reichl's new book,  My Kitchen Year: 136 Recipes that Saved my Life. For those "non-cooking" friends I should explain that Ruth Reichl was the editor of Gourmet magazine when it was abruptly shuttered by its parent company in the fall of 2009. Ms. Reichl was stunned by the announcement (as was I) and as she struggled to process the demise of the magazine, she turned to the one place that had always provided sanctuary. "I did what I always do when I'm confused, lonely, or frightened," she writes. "I disappeared into the kitchen."

For the next year, she slowly healed through the simple pleasures of cooking. While writing this book – part cookbook, part memoir – Ms. Reichl found solace in her kitchen. I found comfort too. And I found this recipe... 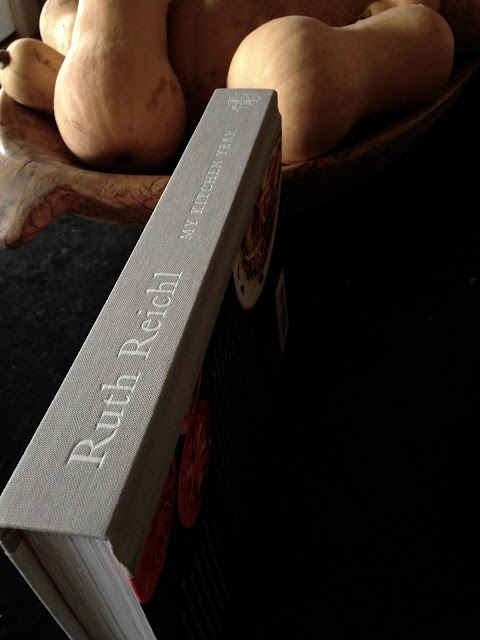 procedure
Preheat the oven to 400 degrees.

Put the chicken stock into a medium-sized pan and stir in the lemon zest. (I used a vegetable peeler and ended up with nice wide strips of zest.) Add the potatoes and the smashed garlic, bring to a boil, cover and cook for about 12 minutes. 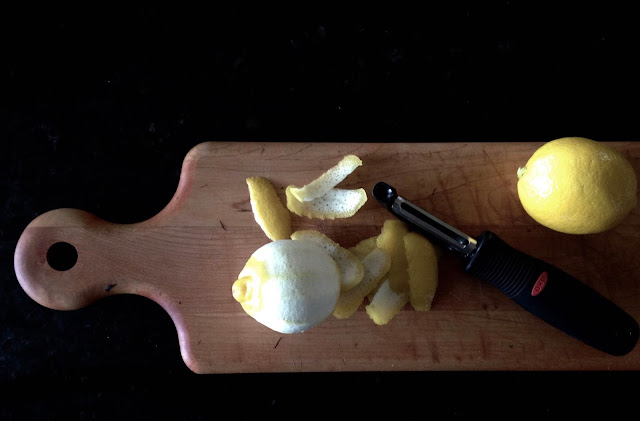 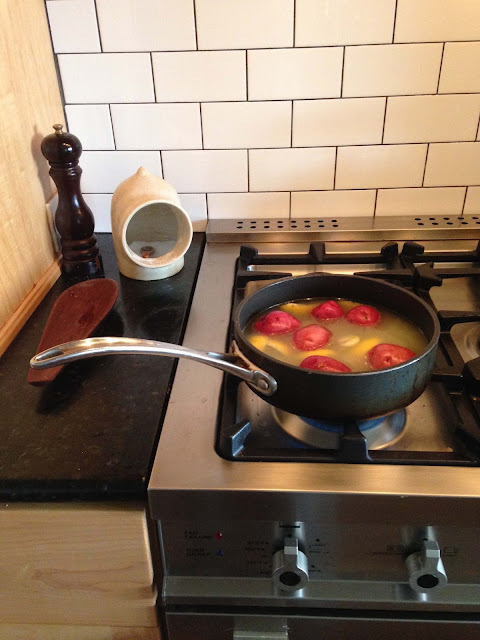 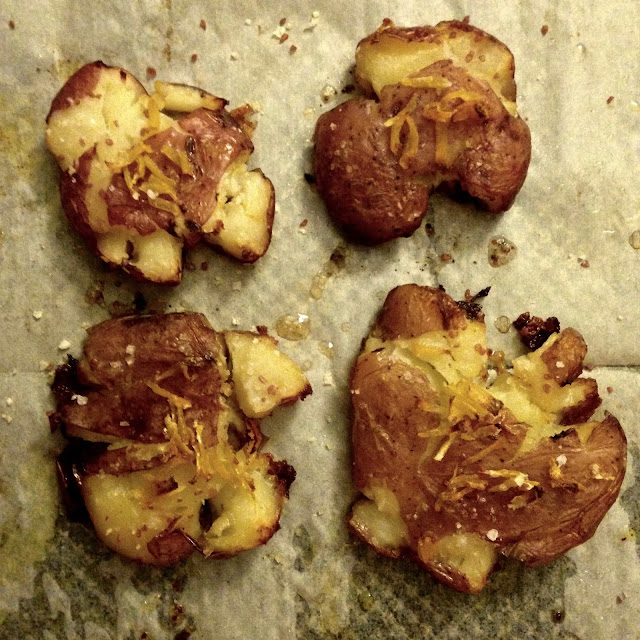 Warning: they are addictive. Bon appetit!
Posted by Debbie Galloway at 7:46 PM No comments: