Scouting out the edges of town

Last week, we drove to Brooklyn to visit Mary, Brian and Saltie (our grand-grayhound). Both Mary and Brian are experts at showing us sides of NYC that most visitors don't get to experience. 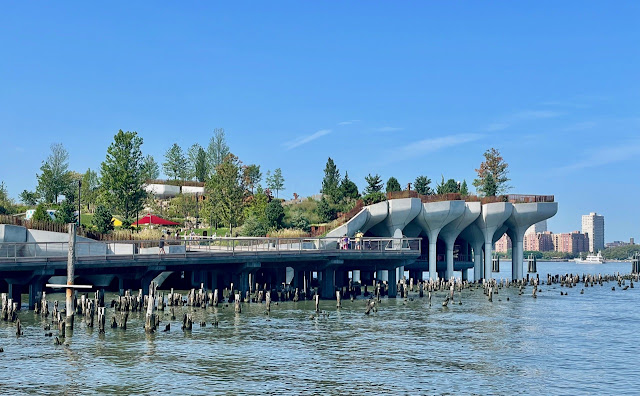 This time around, we scouted out the edges of town, from the southern-most tip of Brooklyn to the northern-most stop on the A Line in Upper Manhatten. We spent part of a day on a brand new island off the west side of mid-town NYC and had dinners in Red Hook and Bay Ridge -- both neighborhoods on the western edge of Brooklyn.

Here's a closer look at our adventures on the edges.

Mary and Brian live in Red Hook, a waterfront neighborhood set on a peninsula between Buttermilk Channel, Gowanus Bay and Gowanus Canal at the southern edge of Downtown Brooklyn. Their neighborhood is pretty isolated with no direct subway stops, but you can reach the area by ferry. It may be a bit remote, but that doesn't mean that little is going on -- quite the contrary. It has a really great food, arts and culture scene. Plus, you can usually find a unmetered parking space! 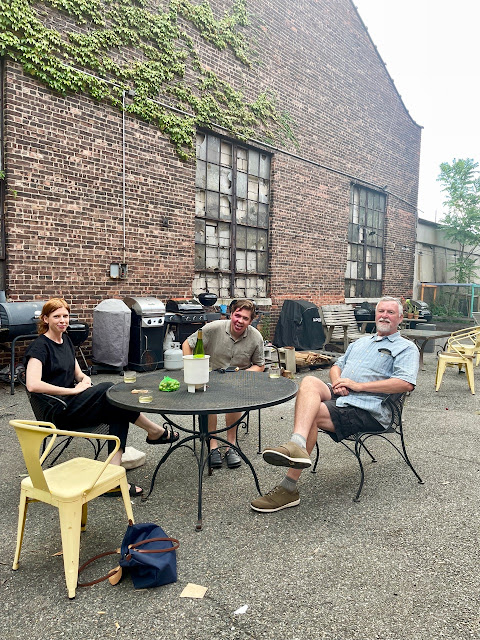 Our first stop after arriving at their loft apartment was to walk across the street to the legendary Defontes Sandwich Shop where we ordered three hero sandwiches, enough to share among the four of us, with leftovers. The woman behind the counter knew Mary, which seemed to happen often as we strolled their neighborhood. But, by many accounts, Red Hook's most popular citizen is their dog, Saltie. Everyone seems to know her and stops to say "Hi."

After lunch we took a stroll up Van Brunt Street, Red Hook's "Main Street," to get the scoop on Ample Hills Creamery, voted the best Ice Cream in America. That evening, we stopped in at the newly opened Strong Rope waterfront brewery. Not only were the beers fantastic, the view was too. From its warehouse taproom, we could see Lady Liberty herself. 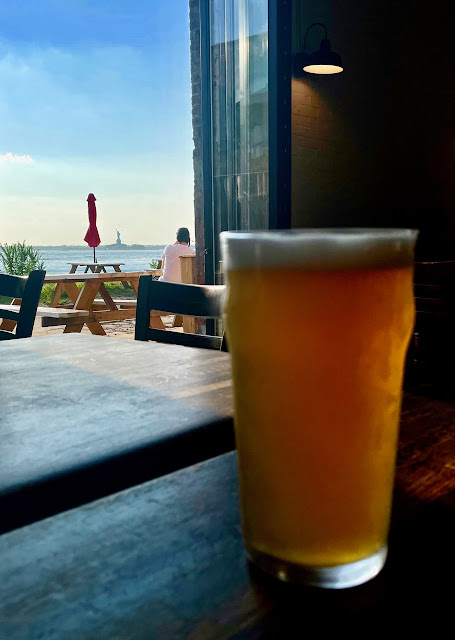 From there, it was on to Red Hook Tavern for a delightful alfresco dinner, featuring one of the best cheeseburgers ever. (Just don't ask Ed how much it cost!) 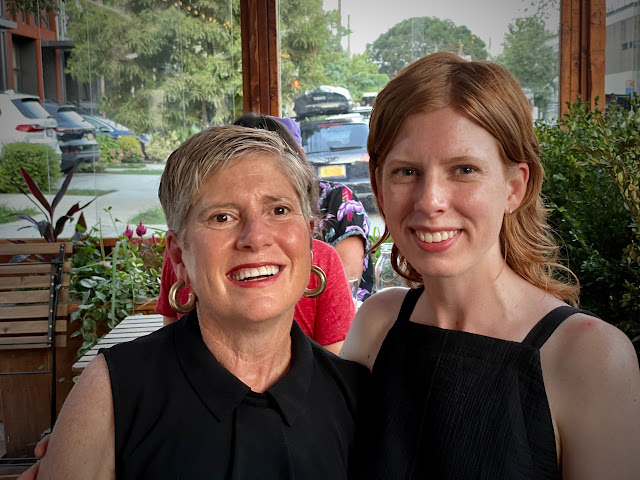 The last night of our visit, we returned to Red Hook for Thai food, eating in the back garden of Somtum Der (Red Hook). Still thinking about the Spicy Pad Thai with Crab...

On my list of things I wanted to do was a visit to The Little Island, a new, free public park pier which opened this past May within the Hudson River Park. Little Island's distinct exterior is supported by concrete piles. On top of them, 132 concrete "tulips" make up the structure of the park. Each tulip's shape is unique and has a different weight load capacity to hold the soil, lawns, overlooks and trees. 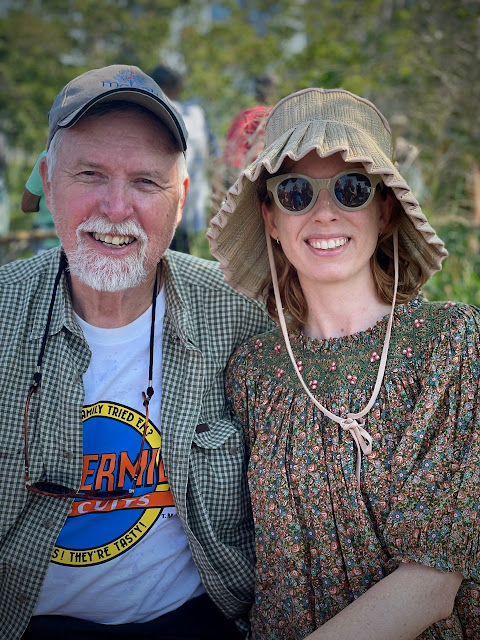 Planned in partnership with the Hudson River Park Trust, Little Island was funded primary through a philanthropic gift from Barry Diller and the Diller-Von Furstenberg Family Foundation. It's really cool. 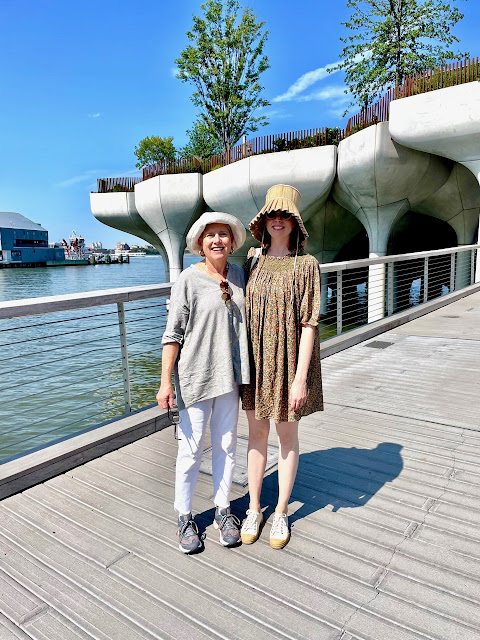 After a morning on Little Island, we walked over to Despaña Vinos Y Mas for an outstanding tapas lunch and mini buying spree of six bottles of Spanish wines (three for us and three for Mary and Brian).

It was hot in New York; I'm talking in the high 90s with "feels like" temperatures of over 100 degrees. But the high temperatures didn't stop us for exploring the edges of the city. On Saturday morning, we met friends Doreen and Lewis for coffee in Park Slope and then headed south, all the way to the southern-most tip of Brooklyn -- to the old-school amusement park and boardwalk of Coney Island. 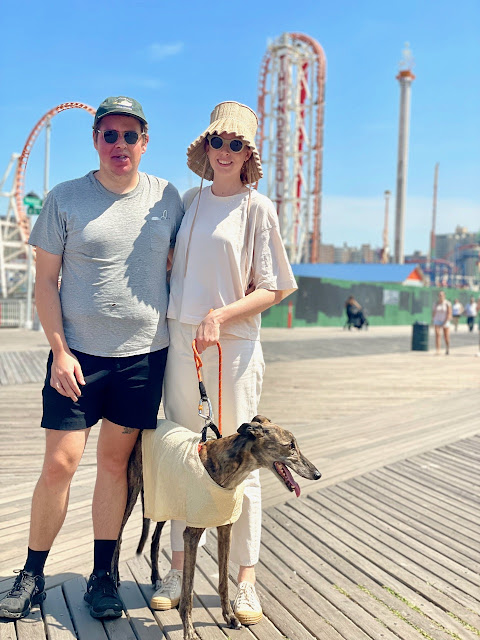 Ed had always wanted to go there; me, I had never really thought much about it, but I'm glad we went. The boardwalk was clean and wide, separating the amusement park from the Atlantic beach. Mary and Brian rode the Cyclone, the second steepest wooden roller coaster in the world, while Ed and I watched and held on to Saltie's leash. 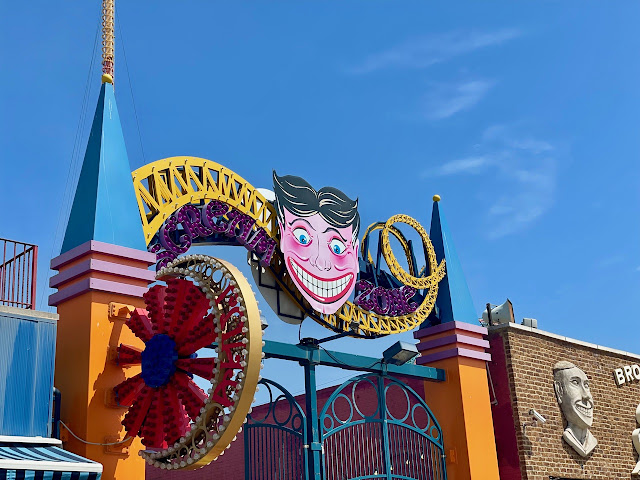 And, of course, we had to try a world-famous Nathan's hot dog... 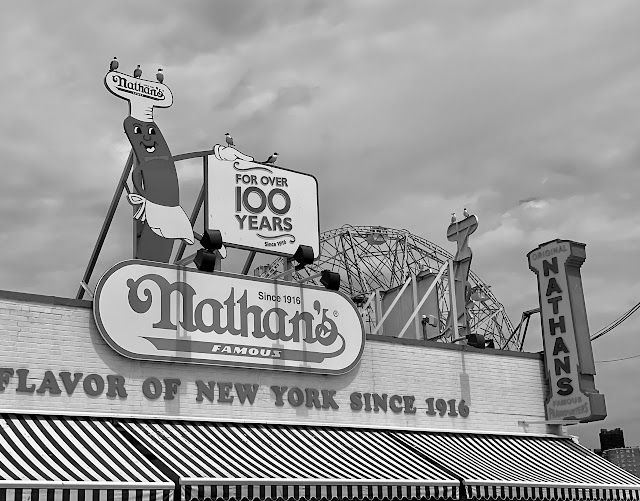 Saturday evening we drove to Bay Ridge, a residential neighborhood in the southwest corner of Brooklyn, meeting friends Alena and Matt and their 18-month-old daughter, Dom. We had met newborn Dom when we were last in Brooklyn; now, she is a walking, talking, beautiful toddler. We dined at Tanoreen, a Mediterranean-Middle Eastern restaurant. Afterwards. we strolled the pedestrian-only street with a music festival happening. 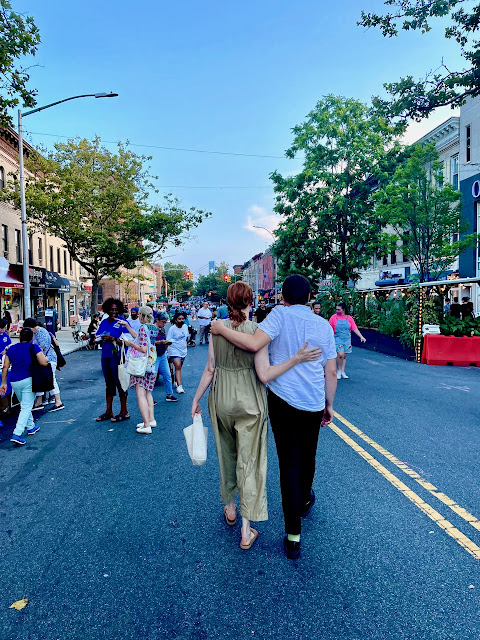 Rounding out our tour of the "edges," on Sunday morning we headed out of the city, on our way to a two-night stay in the Catskills. We make a final NYC stop at The Met Cloisters, a museum in Fort Tryon Park in far, far Upper Manhatten. It is a beautiful space, specializing in European medival art, including the beautiful unicorn tapestries. 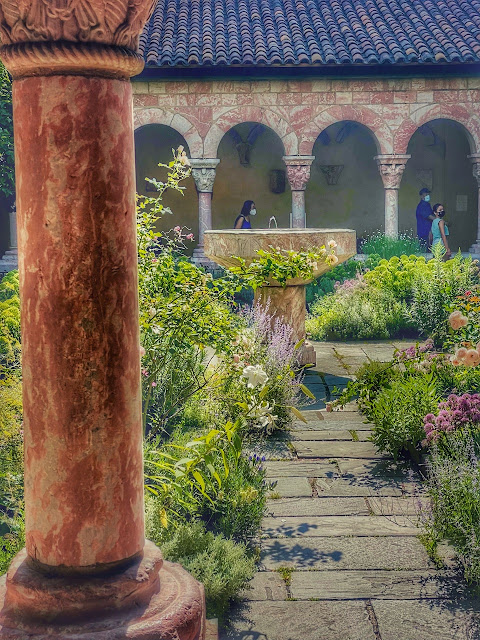 Before and After NYC

On the way to Brooklyn, we stopped for two nights in Lancaster, PA, the hub of Pennsylvania's Amish Country. 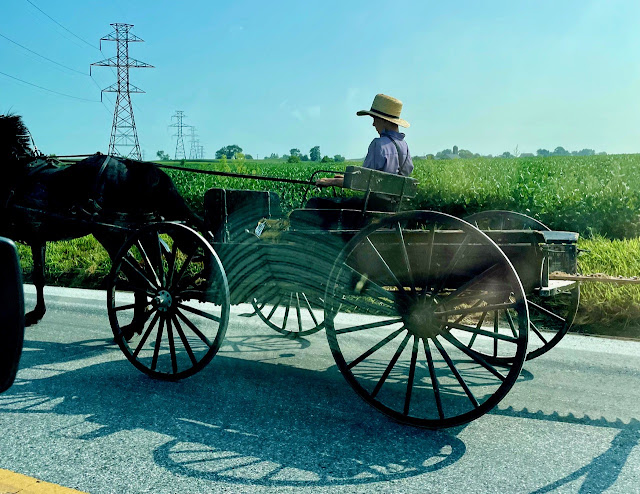 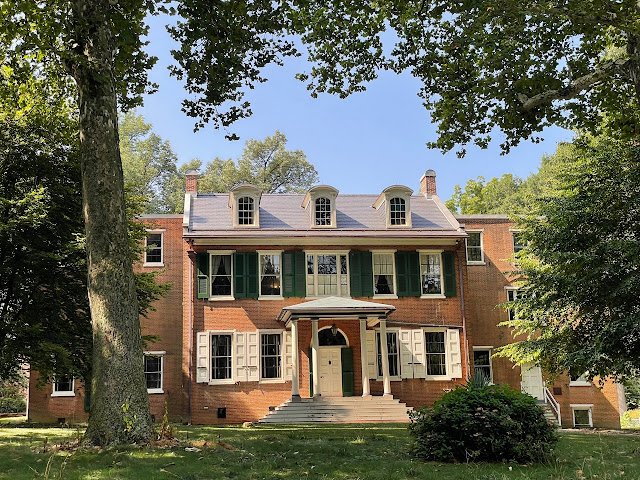 After saying goodbye to Brian and Saltie, Mary came along with us for a two-night stay in the Catskills Mountains. We stayed at The Shandaken Inn, hiked Kaaterskills Falls, lunched at the Phoenician Diner, and dined at the Inn and Peekamoose restaurant and taproom. 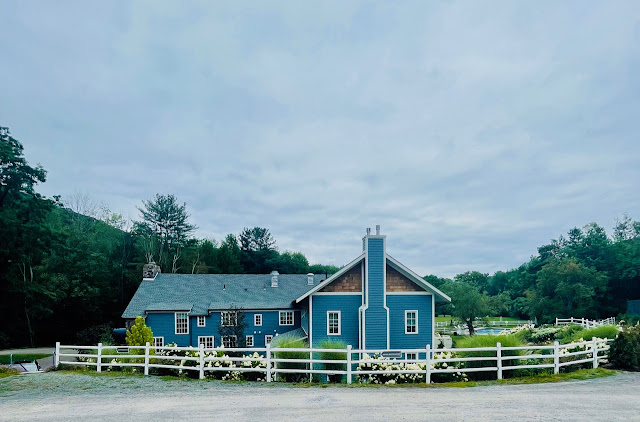 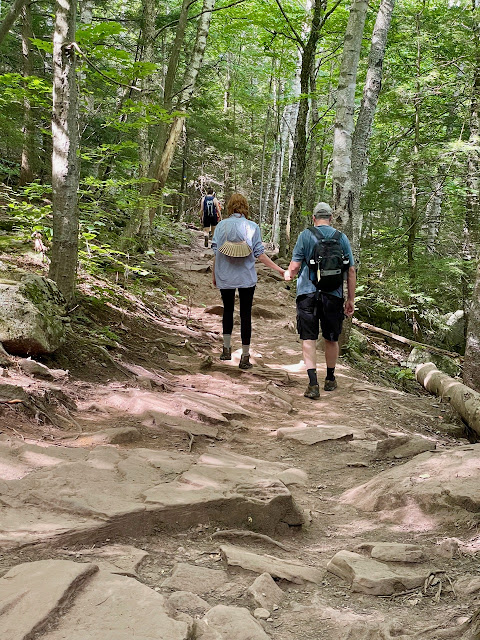 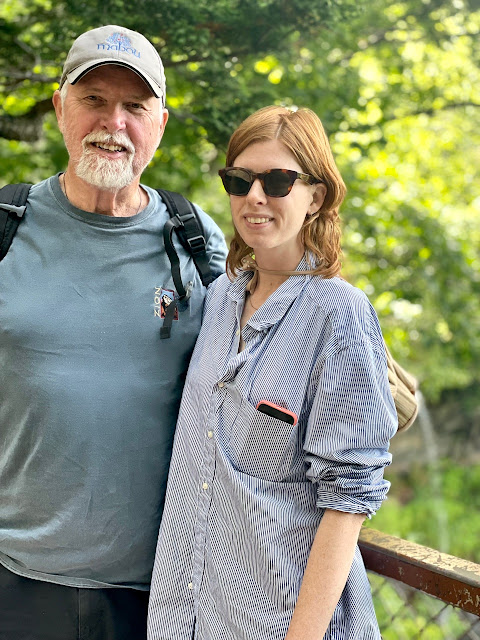 On Tuesday morning, we dropped Mary at the Rhinecliff Train Station, where she caught a train back to Brooklyn.
Ed and I continued westward to spend the night at Letchworth State Park (voted best state park in the U.S.). 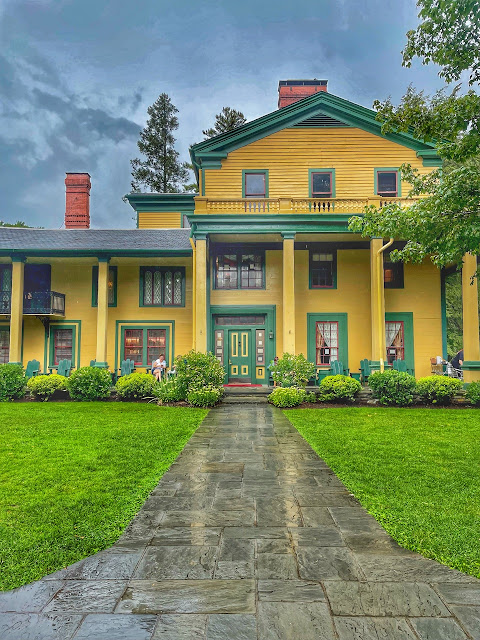 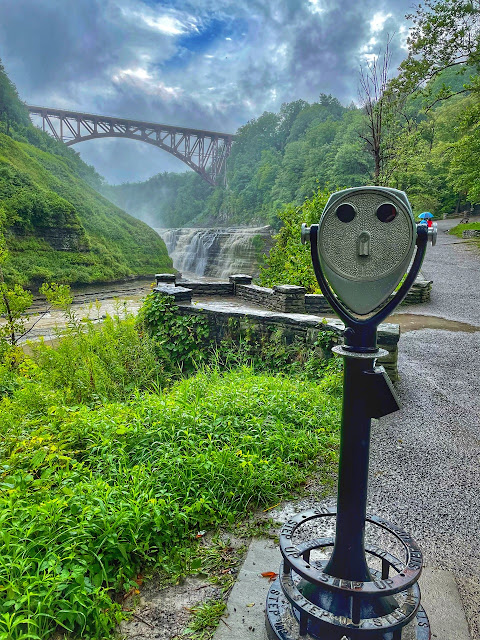 From there, we made our way home to Farm Dover -- and to an over-abundance of garden tomatoes! 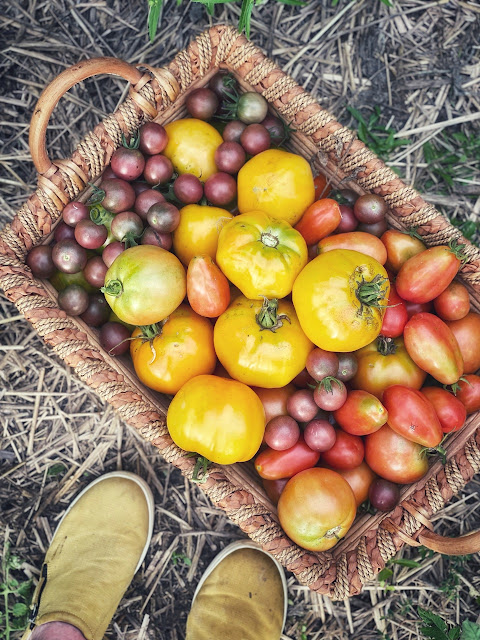 Our only souvenir (besides the three bottles of Spanish wine) was an authentic Amish hat for you-know-who. 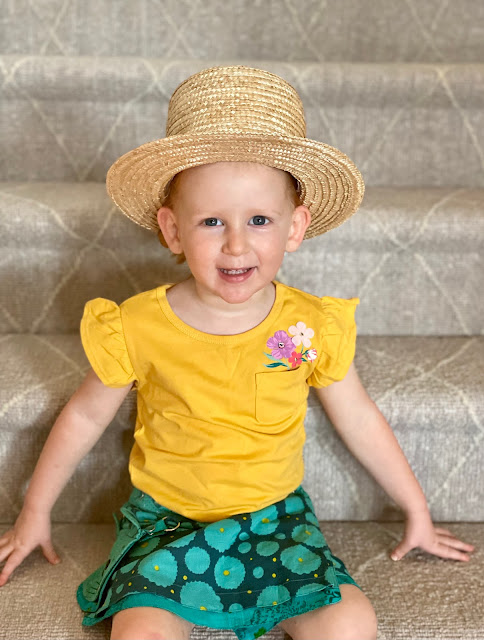 Posted by Debbie Galloway at 6:27 PM No comments:

I love to go a-wandering, Along the mountain track,And as I go, I love to sing, My knapsack on my back. 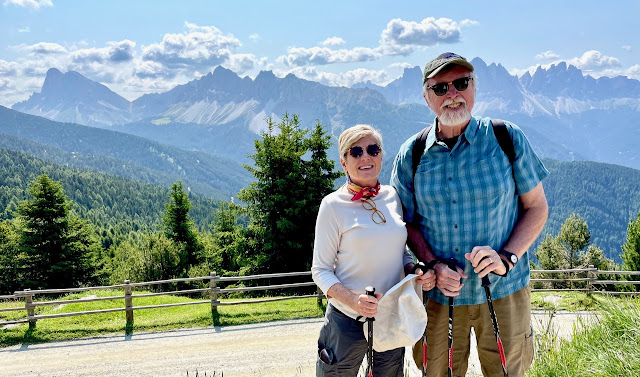 It had been too long since Ed and I went wandering. Covid kept us from visiting Jack and Kasia in Berlin for what seemed like forever. Whenever I would start to miss them too much, Ed would promise me that as soon as Germany opened up, we would hop on a plane and go get a Jack/Kasia fix. That's just what we did last month.
Val-deri,Val-dera, Val-deri, Val-dera-ha-ha-ha-ha-ha
In mid-July we flew to Berlin; four days later drove south to Erfort, Regensburg and Munich; picked up Jack and Kasia, who flew to Munich after work on Friday; and spent a week in the Dolomites, northeastern Italy's portion of the Alps. Every part of our trip was lovely, just lovely.

Jack was the perfect tour guide for our time in Berlin. Kasia was visiting her family in Poland so Jack was our sole host. We visited his neighborhood farmers' market, got a tour their apartment, had alfresco dinner at two great restaurants on their street, caught up with old friends: Christine and Max and their two children, met Maggie's college friend: Claire and her husband Jesse and his dad and girlfriend for coffee, toured a WWII bunker-turned art museum, and Jack rented a convertible for a couple of hours to show us his favorite sites around his adoptive town.
A few details...
We stayed at the Hotel Indigo Berlin - East Side Gallery. Next time, we plan to check out the hip MichelBerger Hotel, nearer to Jack's neighborhood.
Dined at Sicula Bar and Restaurant Butterhandlung, both excellent and both located just down the street from Jack and Kasia's apartment.
The Boros Collection, private contemporary art collection housed in a former bunker.

"Pretty as a postcard" describes the towns of Erfurt in Thuringia and Regensburg in Bavaria. Both are beautifully preserved medieval towns situated on the rivers Gera and Danube, respectively. Our step counts were off the charts as we explored the cobblestone streets and stone bridges, stopping only to peer in a shop, people-watch from a cafe, or quaff a lager in a biergarten.
A few details...
In Erfort, we stayed at the Hotel Kramerbrucke and in Regensburg, we stayed at the Hotel Bischofshof.

We were only in Munich for a day and a half, just long enough to get our bearings and catch up with Jack and Kasia, who joined us after work on Friday.
A few details...
We stayed at Hotel Torbräu, a great location for exploring the heart of Munich. It's an old hotel that felt a bit out-of-date.
We walked to dinner in the au Haidhausen neighborhood at Preysinggarten, a charming Mediterranean cafe. Food was delicious, but service was slow as they were just opening back up from Covid lockdown.
The Viktualienmarkt is a huge, daily farmers' market with more than 100 stands offering vegetables, flowers, bratwurst, beer, and, much to Ed's delight: Turkish Delights.

From Munich, we headed south on the autobahn towards Innsbruck, Austria, and then on to Bolzano, a city in the South Tyrol province of north Italy.

A few details...
We stayed at Hotel Greif, a beautiful art hotel located on the Piazza Walther.
Loved our al fresco dinner at Am Gleis, high up the mountain reached via cable car.
Will always remember our Michelin-Star dinner at In Viaggio.
Drove over to Merano for a visit to the botanical gardens Trauttmansdorff Castle.

Jack found this wonderful old inn near the medieval town of Klausen. It is located on a sunny mountain slope in the Eisack Valley with views of green meadows, deep forests and rugged mountain peaks. A natural pool and ping pong table were the icing on the cake. We celebrated my birthday with dinner on the front patio and made a nearby hike (WoodyWalk) and picnic on Plose Mountain. 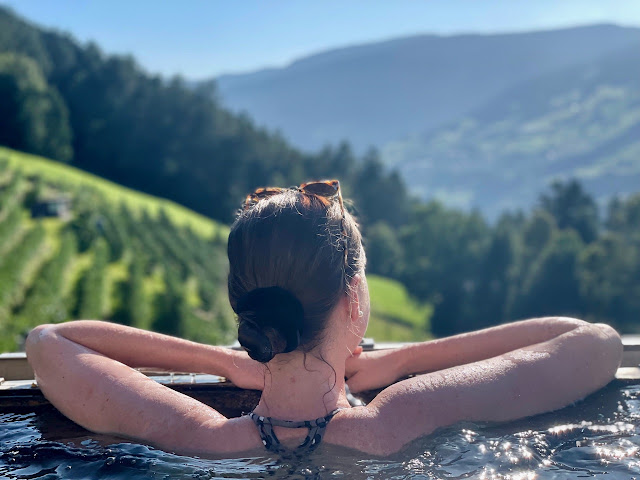 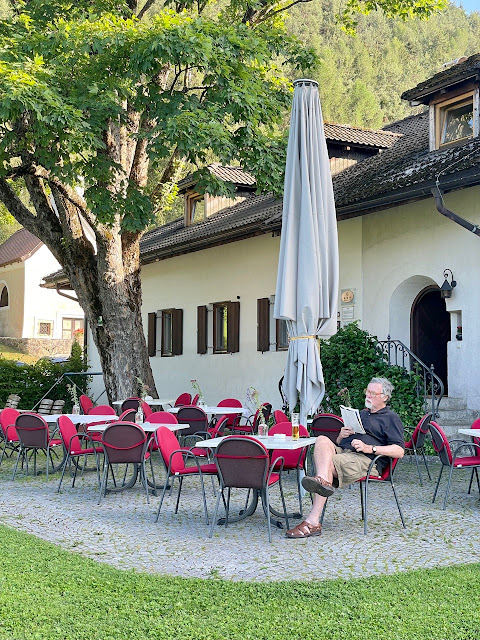 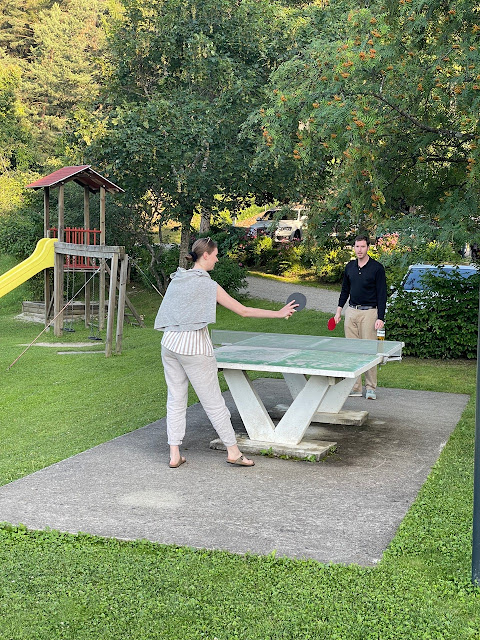 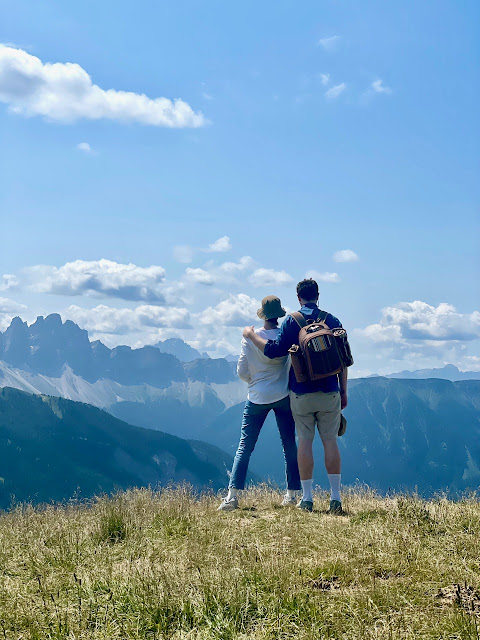 Our last stop before heading home was to Padola, a ski town near Tre Cime, which are the three distinctive battlement-like peaks, the most famous of the Dolomite Alps. The bartender at the hotel bar convinced Jack and Kasia that we should hike up a nearby mountain to get a glimpse of the Tre Cime peaks. He said it was "easy." Yes, "easy" if you are 20 and a nordic ski instructor. Not so much if you are me. Going down was much easier! 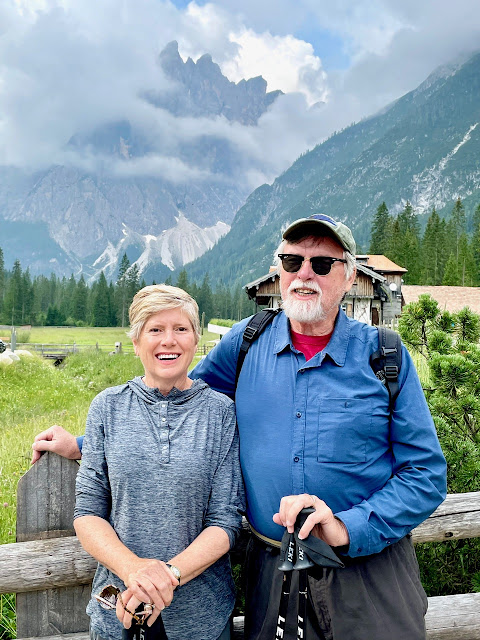 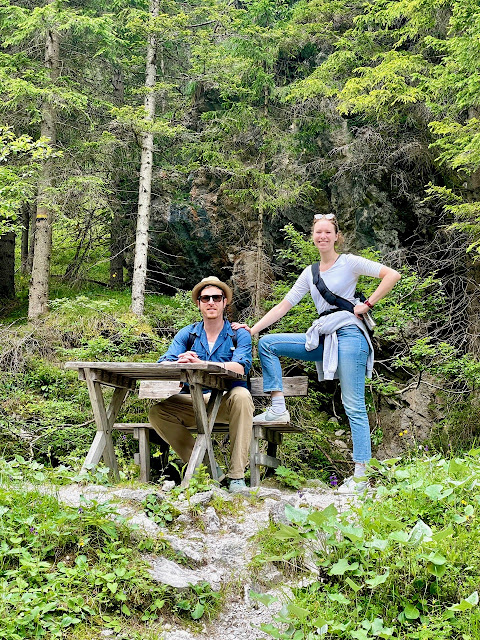 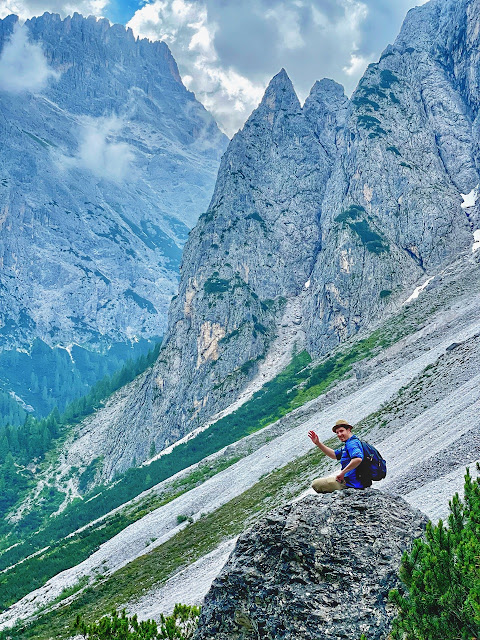 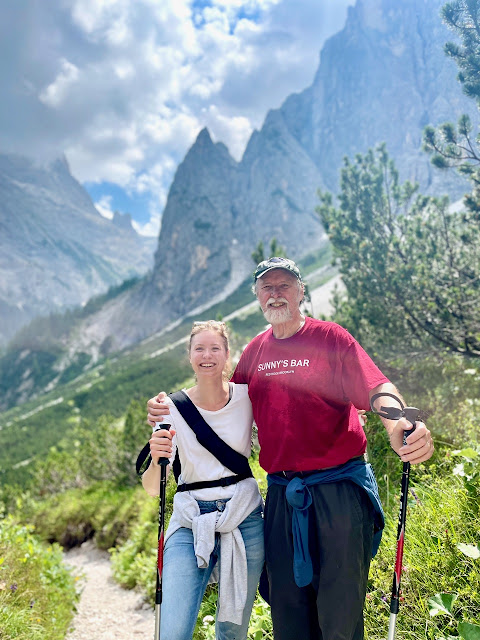 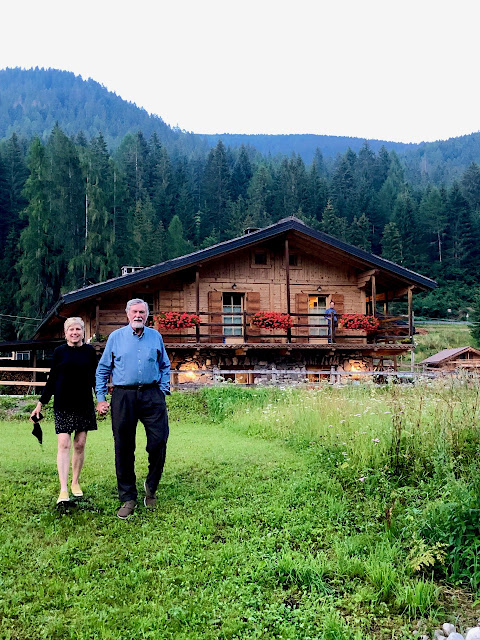 A few details
We stayed at the Active Hotel La Torre, a contemporary hotel in a tiny town, with new owners that were happy to have us.
We walked through the meadow to get to Moié Farmhouse for a local specialties dinner.

After Padola, we turned north and made our way back to Munich. Jack did the driving; Kasia did the navigating. For our final night, we stayed at the Marriott Hotel near the central train station. The next morning, Jack and Kasia walked us to the train and made sure we got on the train headed to the airport. They stayed one more night and then drove the rental car back to Berlin.

Our souvenirs from the trip.

Our next opportunity to go a wandering is coming up soon. We've planned a trip to see Mary, Brian and Saltie in Brooklyn and then head upstate for a couple of days.