Saturday morning -- we were up and out the door by 8:30 for a day of fun. No lawyer work. No marketing work. No farm work. Heck, I didn't even make the bed.

We started our day with a hike with Mary Ray, nationally renown herbalist from Bardstown. A group of about 20 people showed up for a two-hour hike (a stroll rather) around 400-acre Shelby Trails. Mary couldn't go three steps without stopping to show us a useful weed, wildflower, or tree bark. She was like a walking encyclopedia of wisdom for the therapeutic use of medicinal plants -- maybe more like a combination medicine woman/shaman. For every specimen, she talked about its medical uses and whether she uses it to make a tincture, salve, poultice, extract or tea. It was a lot to take in -- but definitely roused our curiosity. One more thing to add to our list of things we need to learn.

Straight from the hike, we headed to Ed's hometown of Owensboro, Ky. While we used to make the trip every couple of months to visit Aunt Gladys, we hadn't made the trip in nearly a year.

All in all, a very fun day.

Posted by Debbie Galloway at 5:18 PM No comments:

Somehow just because I live in Kentucky I'm supposed to be crazy about college basketball -- specifically UofL and UofK basketball. Truth be told, I can only take it in small doses. Last month Lynn and Walt invited us to a Louisville game in the YUM! Center and that was exciting. And I'm happy to watch the last few minutes of a particularly close game, but I'm less than thrilled to be subjected to hours and hours of NCAA Division I games -- 64 teams worth. So last night when the Wisconsin/Syracuse game was just getting underway and the sun was just starting to go down, I left Ed in his comfy chair with the remote control firmly in his hand and headed out to my garden.

Earlier in the day a big box from White Flower Farm was delivered to our front door. It contained a dozen hellebore plants (along with some blueberry, raspberry, blackberry and current bushes). The weather forecast for the next two days called for heavy rain so I decided this was my chance to get at least the hellebores into the ground.

As you know, I've been focusing on my vegetable garden and have given little thought to planting perennials. When Maggie was visiting last week she picked up the catalog from White Flower Farm and started marking all the plants that I just "had to have." Among them were some helleborus x hybridus -- otherwise known to me as Lenten Rose. My friend Jackie has some of in her garden and I'm always charmed to see these beautiful flowers blooming, long before anything else wakes up in her garden. Jackie's feature pale green or white sepals that last well into summer. The ones I ordered are a "winter thrillers" mix featuring flowers that measure 3 inches across and range from green and pink to burgundy and white. 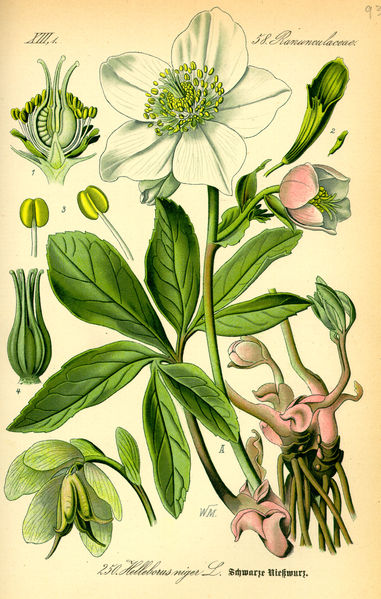 This hybrid mix is closely related to the Helleborus niger, commonly called the Christmas Rose. It gets its name from an old legend that it sprouted in the snow from the tears of a young girl who had no gift to give the Christ child in Bethlehem. I like this story. 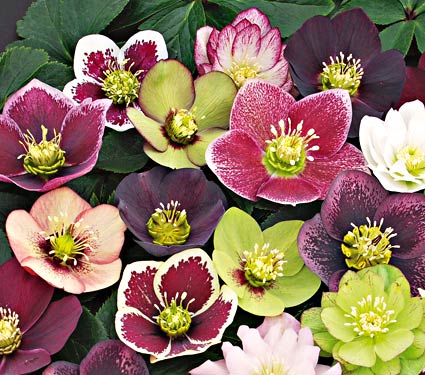 Anyway, I knew my time was short for getting these plants in the ground. The sun was barely visible above the horizon when I got started and the moon was well on its way up into the sky when I finished. Because they like shade, and because I haven't given much thought to where I want to ultimately plant perennials, I chose to tuck these plants in behind the Quick Fire Hydrangeas that run along the side of the cottage. Just as I was finishing I heard the coyotes start to howl and decided it was time to head back inside -- just in time to see Wisconsin lose (darn) to Syracuse by one point.
Posted by Debbie Galloway at 5:11 PM No comments:

One year ago today, we moved from our (temporary) home on Calumet to Farm Dover. Hard to believe it has been 12 whole months, four whole seasons, one whole year. Seems like we ought to celebrate! 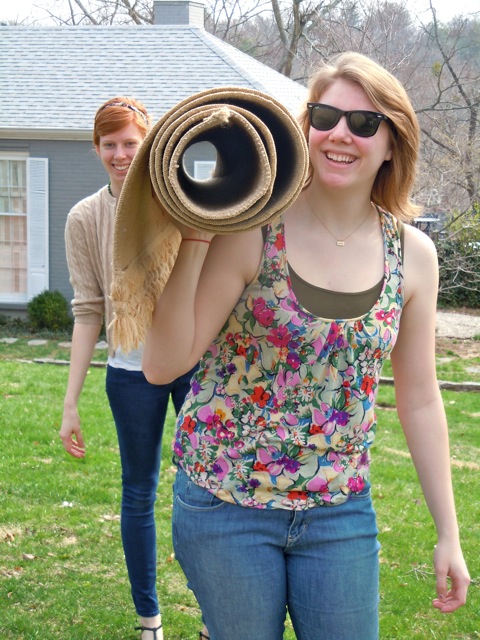 Posted by Debbie Galloway at 3:18 PM No comments:

We Make a Good Team

This farm requires a lot of love and care – digging and planting, lifting and tilling, hoeing and weeding, chopping and pruning, dreaming and creating. Ed and I make a good team. 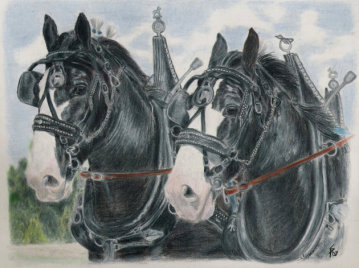 We've been planting a lot of trees recently. Ed digs the hole; I throw in some compost and plant the tree. We move on to the next one.

Today Ed hoed up a bunch of dead grass and weeds along the drive; I came behind with the tiller and grass seed.

The roses we planted along the front fence needed some tending to. I add a scoop full of compost around each plant; Ed follows with fertilizer.

I grind the coffee beans at night; he brings me a cup of coffee in bed every morning. For this, and a million other things, I am grateful.
Posted by Debbie Galloway at 9:57 PM No comments:

Something to Think About... 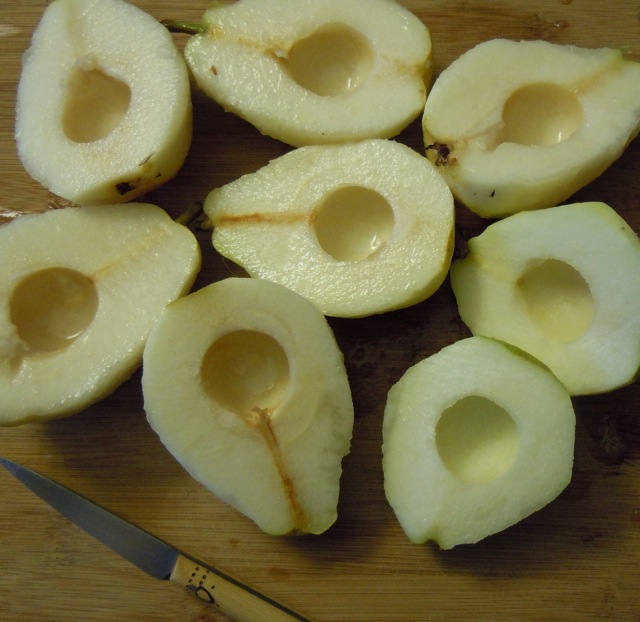 Posted by Debbie Galloway at 9:43 PM No comments:

With plenty of sunshine and summer-like temperatures to goad us on, Ed and I added compost to my raised beds and tilled up the cover crop of turnips. Then I tucked in sugar snap and shelling peas, purple and scarlet carrots, radishes and dark red beets. By mid-May we should be tucking into some mighty fine veggies. 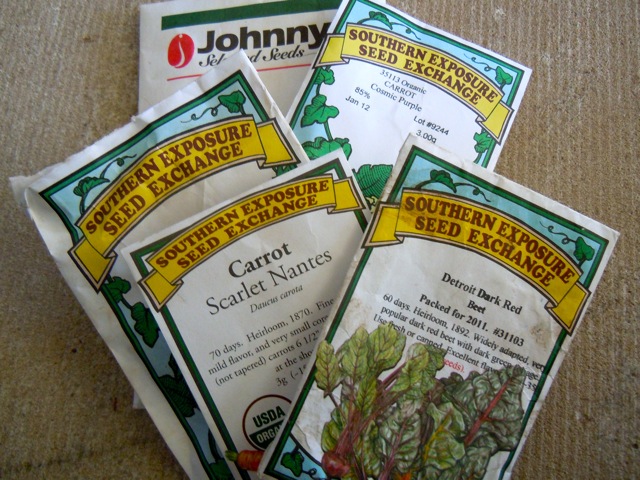 Posted by Debbie Galloway at 4:23 PM No comments:

Spring is Here, No Matter What the Date

Spring fever has infected both Ed and me in a big way. Here's his take on it.
According to the calendar, spring is still a ways off, but try to tell that to FarmDover. 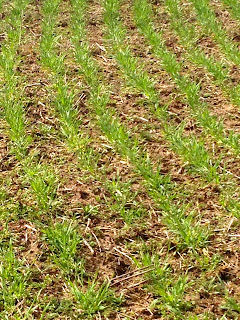 The other day I noticed without it really registering that the birds had gotten loud around day break, louder than they had been since last fall (but not as loud as they will be later on, when they wake you up when the windows are open).

Then, it did register on me that the winter wheat that Danny planted last fall to replace the raggedy patches of Johnson grass and other weeds was welcoming warm weather with a brighter shade of green.

So I started paying attention.

Birds again – red-winged blackbirds, robins galore. Then Debbie and both saw a pair of what seem to a mating pair of hawks. Then, this morning I scared up a killdeer. Killdeers are ground nesters so we’ll have to be careful where we mow.  We have also noticed other new birds – dickcissels and lots of sparrows.

The spindly trunks of our orchard trees have taken on a primary shade of red and the crowns are about to burst with flower.

Finally, I was down by the little creek splitting wood for next winter.  (A mindless task that I enjoy except for trying to split logs from a newly fallen locust.  Even with my maul, it was like trying to split them with a Louisville Slugger. A walnut that fell over a year ago was much more accommodating).

Anyway, down by the creek, I ran into this little fellow, like me, stretching himself and taking in the warmth.  So, spring is here, no matter what the date. 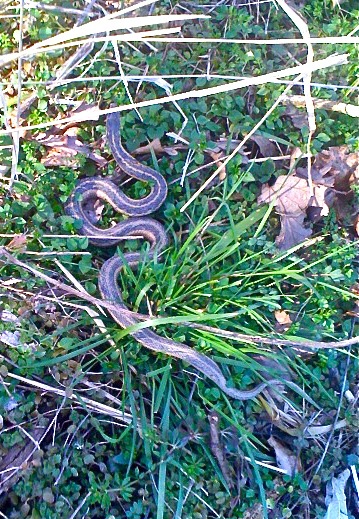 Posted by Debbie Galloway at 5:58 PM No comments: 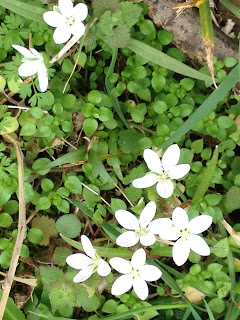 I pulled on my rubber boots, grabbed a mesh bag, and headed down to the creek. I had the vague notion that I was headed out to look for the first ramps of spring and, if I got lucky, might stumble upon some morel mushrooms.

It seemed unthinkable that just last Monday, I was out tromping through four inches of snow and today, I am walking on a carpet of green, purple, blue and white wildflowers.

I didn't find any ramps. And I didn't find any morels. But the trip was not without reward. It was a treasure trove for my senses. I could hear the water rushing in the normally dry creek bed; every once in a while some small creature would plop into the water; honey bees were loudly buzzing around the purple wildflowers; the birds sounded like they were at a convention. I even heard a woodpecker looking for his lunch.

Everywhere I looked something new was growing, chirping, buzzing or swaying. I saw cardinals, red-winged blackbirds, robins, sparrows of all sorts, meadow larks, even the first blue jay.

It is supposed to reach 74 today and it is not yet the Ides of March. I'm not sure what this mild winter and early spring will bode for us come July, but it makes for a lovely morning down by the creek.

Seeing all these beautiful wildflowers has made me curious to know what I'm looking at and whether I can eat them. I'm planning to attend an early spring wildflower hike and edible plant program at the Shelby Trails Park on Saturday morning, March 24. Mary Ray, nationally trained Folk Herbalist from Bardstown is leading the hike. Let me know if you want to join me.
Posted by Debbie Galloway at 2:05 PM No comments:

A Taste of Spring

Late in the fall, I planted a couple of rows of corn salad as a cover crop in my raised beds. And then mostly forgot about them. Until tonight when I was wishing for a fresh salad and headed out with a trowel to see what I could find. Sure enough, there were these beautiful little rosettes, ready for the picking.


Corn salad, once considered a weed, was originally foraged by European peasants until the royal gardener of King Louis XIV introduced it to the world. Known by lots of names – mache, lamb's lettuce, lambs tongue, or field lettuce – it has three times as much Vitamin C as lettuce and is chalked full of beta-carotene, B6, B9, Vitamin E, and omega-3 fatty acids. Its tender leaves have a mild flavor, maybe with a bit of a nutty taste. To me, it simply tastes like spring.
Posted by Debbie Galloway at 7:03 PM No comments:

Solved: The Case of the Missing Puzzle Piece

I know this is not earth shattering news, but I was so pleased to find the missing puzzle piece when I moved the couch to vacuum under it. Somehow it makes me happy to think that it wasn't left out of the box as a trick by some mean-spirited puzzle-factory worker. 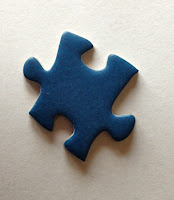 Posted by Debbie Galloway at 4:06 PM No comments: