There was a thunderous crash inside the house. I was in the study. Ed was in the living room. We both left our posts to make sure the other was okay. We were. But our decade-old crock pot was not. For some unexplainable reason, it had heaved itself off the cabinet shelf and crashed down onto the kitchen floor, shattering its ceramic insert.

We tried to find a replacement insert, but the pot was so old that even the replacements had been discontinued. I thought about not replacing it; I don't like a bunch of specialty appliances sitting around, taking up space. But, I’m a huge fan of using a crockpot for a few things: overnight chicken broth, apple sauce, pumpkin butter -- once I even rendered lard in it.

After much internal debate and consultation with Maggie and Mary, I ended up ordering an Instant Pot, a programmable pressure and multi-cooker. The one I chose is a 10-in-1 pot that supposedly is a sauté/searing pan, pressure cooker, slow cooker, rice/porridge cooker, cake maker, sous vide cooker, yogurt maker, steamer, warmer and sterilizer. Think of it as the Swiss Army Knife of kitchen appliances. In reality, it feels a bit like buying a fancy car with so many bells and whistles that you never figure them all out. Oh well, the Instant Pot arrived this week and I set to experimenting with it. 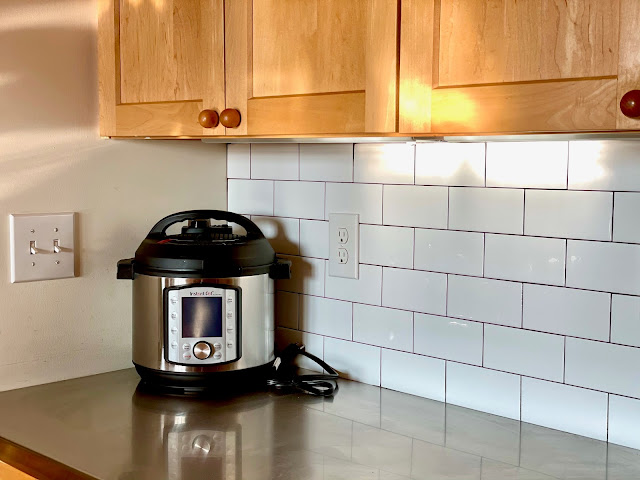 So far, I've made rice, ham and bean soup, dried lima beans which I turned into this amazing hummus, beets, new potatoes, boiled eggs,  and steel-cut oatmeal. Do I love it? Not yet. But I can see where it might earn its place in my kitchen. 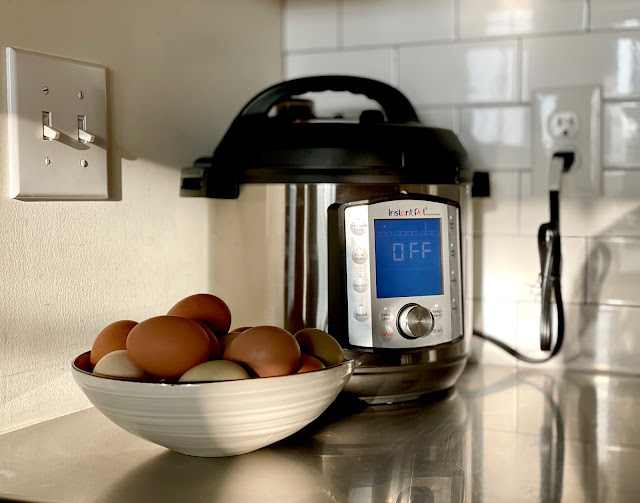 Here's the thing about an Instant Pot: You load it up with ingredients, seal the lid with a little twist, and press a button. The contraption then warms up, cooks the food with pressure and then decompresses the contents. Only then can you unseal the lid and peek inside at your cooked food.

This process doesn't really mesh with how I like to cook. I don't usually follow a recipe, but rather cook intuitively, watching for the magical transformation of ingredients. What's going on in that pot on my stove? Does it need a lower flame, a handful of herbs or spices, or more salt? What does it sound and smell like? How does it taste? Adjust. Adjust. Adjust.

So I don't think an Instant Pot will be my method of choice for my day-to-day cooking. Rather, I think I will grow to like it for dried beans and lentils, for rice and grains, for boiled eggs, for broths. 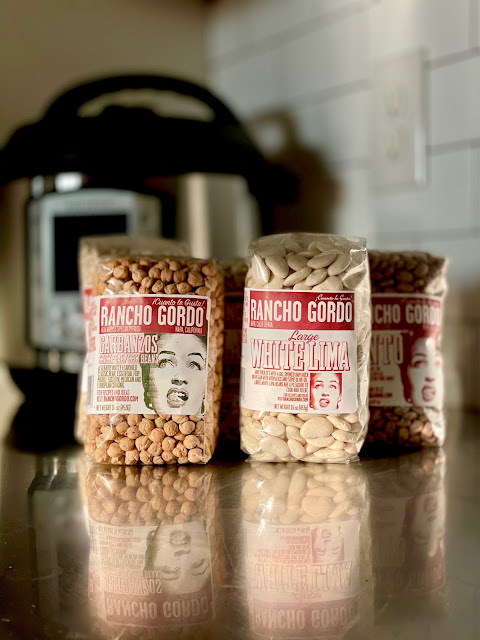 Posted by Debbie Galloway at 9:32 AM No comments:

Welcoming in a Happier New Year

As I'm sure you know by now, I love to concoct homemade beverages – alcoholic or not – everything from milkweed and elderflower cordials to elderberry gin to wine made with green walnuts. Some are tastier than others; all are fun to make.

For Christmas, friend Alisa gave me a small book called "Blotto Botany," which has a whole section on making bitters. I can't wait to try to make some in this new year. Before I could even figure out which bitters to try first, I was sidetracked by another recipe that I came across on Gardenista, one of my favorite blogs. The article was about how to make homemade orange-spiced wine. 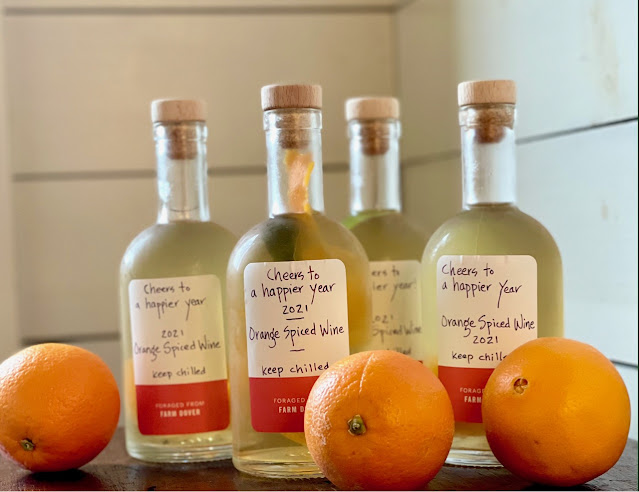 The recipe looked simple enough. I had all the ingredients except for two bottles of not-expensive Sauvignon Blanc wine, which Ed picked up this week at our local Kroger wine shop. All I had to do was open the bottles and bring their contents to a boil, along with a half cup of sugar, a quarter cup of Grand Marnier and the same amount of Sambuca. I then added 4 bay leaves and 8 whole cloves. While the mixture was coming to a boil, I carefully peeled the zest from four oranges, trying hard to keep the peel in one long spiral.

Sister Julie had recently given me four recycled bottles. I stuffed a spiral into each of the bottles and then filled them with the hot mixture, making sure each bottle also contained one bay leaf and two cloves. I left them uncorked to cool while I went to work on labels. 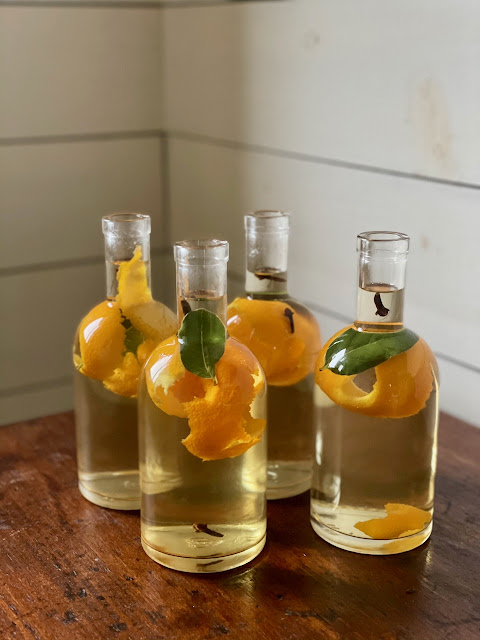 Last night, Ed and I uncorked a very chilled bottle of the stuff to ring out the old year and welcome in a happier new year. We took a sip. It was delicious. We polished off the bottle. (Don't worry: it only amounted to two glasses each.) 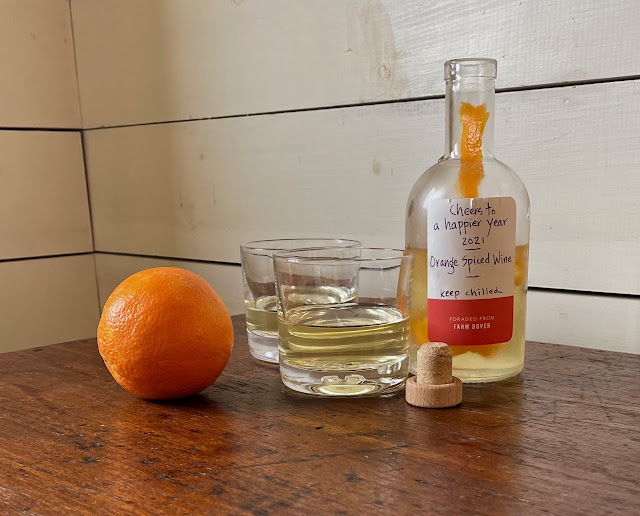 Although its ingredients included Sambuca, an anise-flavored Italian liqueur, it didn't have any hint of a licorice-like taste. So, if you think you don't like anise, don't be put off from trying this. 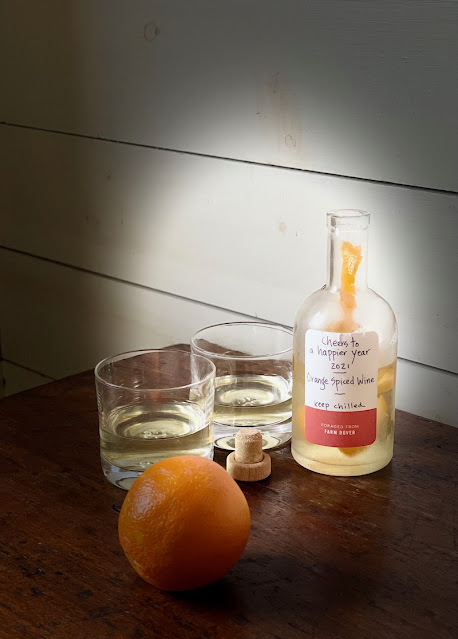 The bottles should be kept chilled and consumed within a month – but if you like it as much as we did, that won't be a problem.

Cheers to a happier year!

Posted by Debbie Galloway at 2:23 PM No comments: