Last month our travels serendipitously took us to Croatia. I say serendipitously because we had not been longing to go there, or even knew what we might be missing. We chose it because we wanted to visit our son Jack in Berlin and knew we wanted to travel for a week or two afterwards, preferably somewhere that Jack could join us for at least part of the time.

We considered heading north to Hamburg and then on to Denmark. But spring is slow to come to that part of the world and we were feeling in need of some Mediterranean sunshine. So with a spin of the globe, we landed on Croatia. 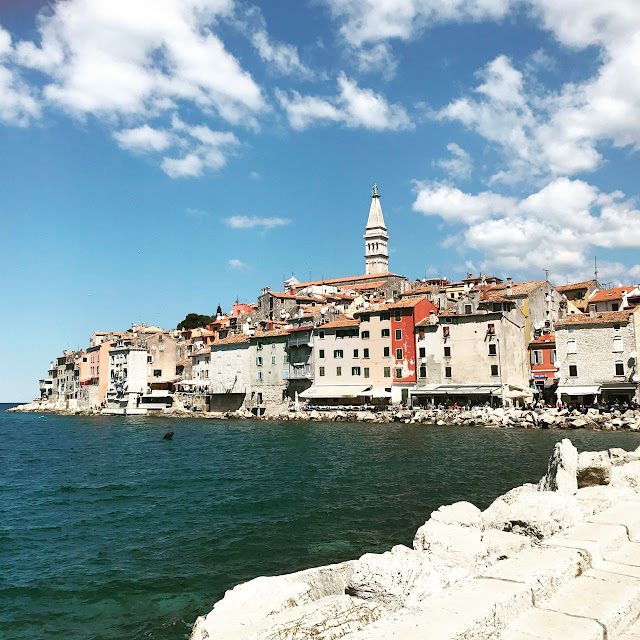 Here's all I knew about Croatia before our trip: It lies to the east of Italy, separated only by the Adriatic Sea. People of a certain age know it as part of Yugoslavia (until it gained its independence in 1991).

Here's what I know now: I'm so glad we went.

We spent the first weekend of our trip in Berlin – catching up with Jack, meeting his friends for dinner, checking out his apartment in East Berlin and wandering the city – taking in its deep history, beautiful parks and memorials, remaining portions of the Berlin Wall, multiple flea markets, museums and restaurants. 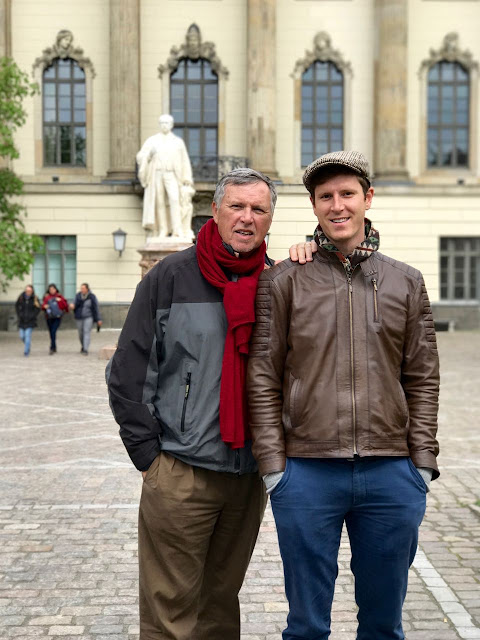 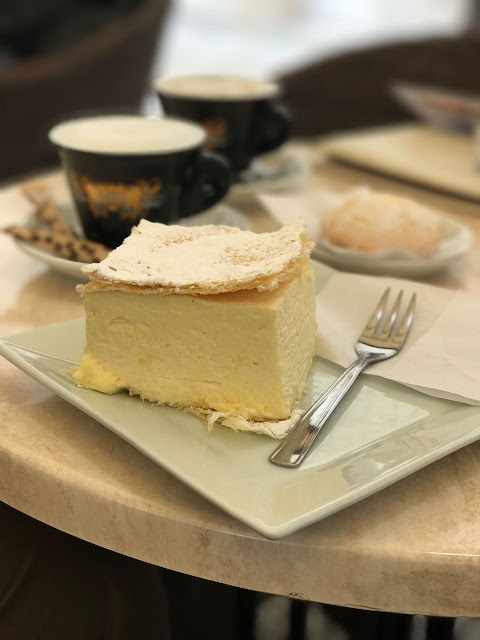 Jack joined us two days later and travelled with us for the next five days. We rented a car (with GPS) and drove our way from Split, northward to Zadar, Plitvice, Rovinj, ending in Zagreb. (Because our time was limited, we did not make it to Dobrovnik.)

It is hard for me to pick out my favorite places because every where we went I would declare: "This is my favorite." Instead, let me give you a glimpse of three spots that I hope will entice you to put Croatia on your bucket list. 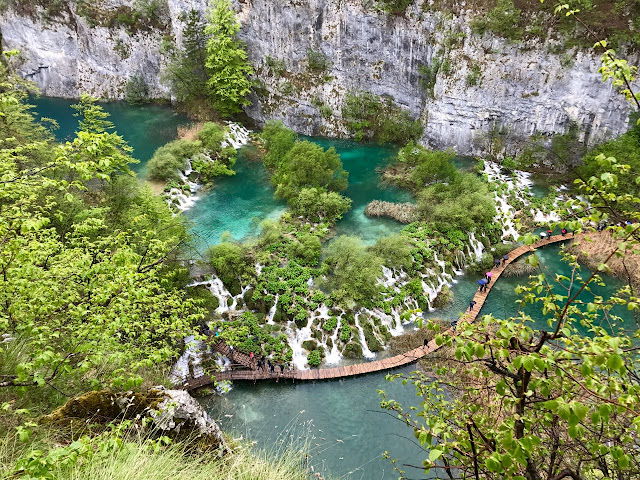 We spent the better part of one day exploring Croatia's oldest and largest national park, comprised of a series of 16 crystalline lakes that cascade into each other via mineral-rich waterfalls. I don't even have the words to describe how magical it felt to hike the 6 miles or so (downhill) on wooden footbridges and paths, taking in the flora and fauna. Surely one of the best days of my life. 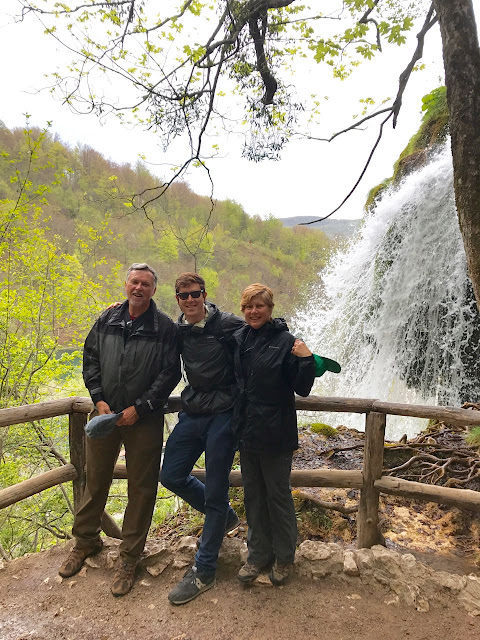 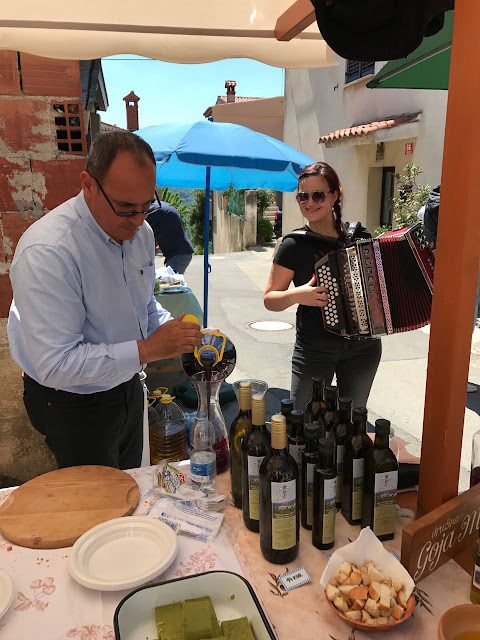 We pride ourselves in finding local festivals and parades on our travels and hit the jackpot when we veered off course and made our way uphill to the tiny village of Padna, Slovenia – on our way to Piran. The entire town was set up to welcome neighbors and visitors to its annual Chard Festival -- yes, you heard me right -- a day of celebrating all things chard (and olive oil, and wine, and figs). We wandered through the streets sampling all that they had to offer, loading our backpack with bottles of fresh green olive oil and local wine. 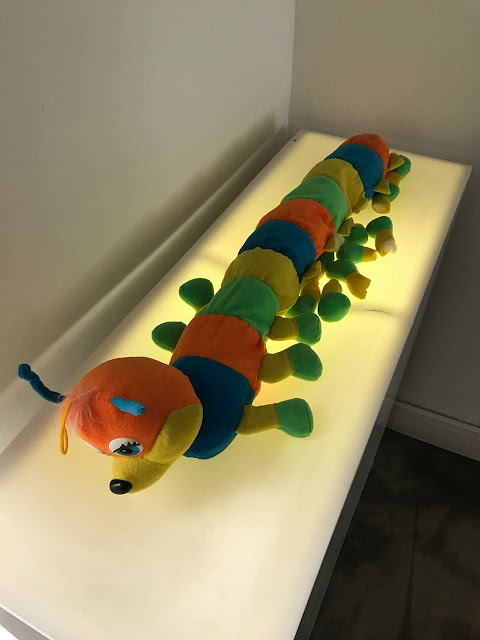 The Museum of Broken Relationship in Zagreb grew from a traveling exhibition revolving around the concept of failed relationships and their vestiges. The Museum offers the chance to overcome an emotional collapse through creation: by contributing to the Museum's unusual collection. One of the strangest museum I've ever visited, it engaged me from the first exhibit to the last: stories of love, loss, regret, revenge and retribution. The above "doodlebug" lost a leg every time its young lovers would see each. Supposedly, when they ran out of legs to tear off, that would be the time to start a life together. The relationship broke and so the doodlebug did not become a complete invalid after all. 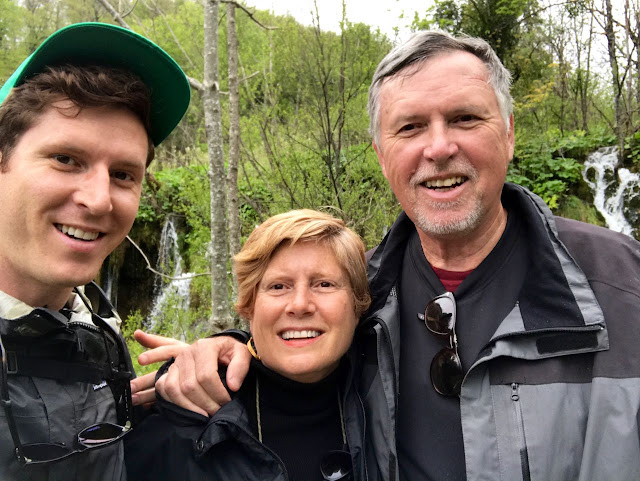 Of course, the best part of our trip was traveling with Jack, who lives so far from Farm Dover, but is always a happy, knowledgeable and appreciative traveler. Here's to many more serendipitous travels with our beloveds.

Details that I don't want to forget 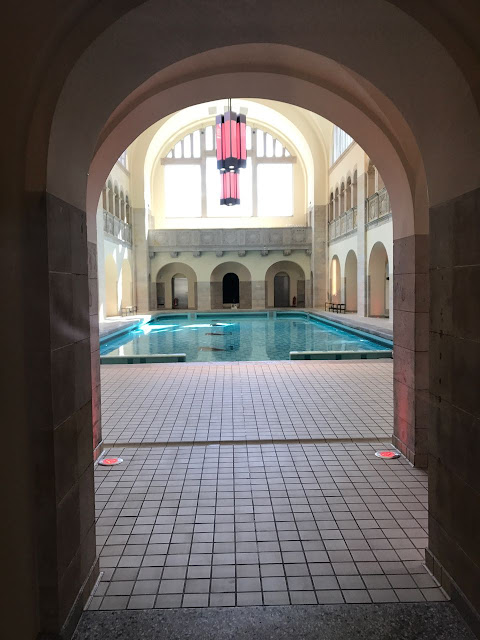 PraterGarten
Berlin's oldest and most beautiful beer garden, but too cold to sit outside this time. We met up with a table full of Jack's friends, including former Collegiate exchange student Max Freitag and his finance, Christina. 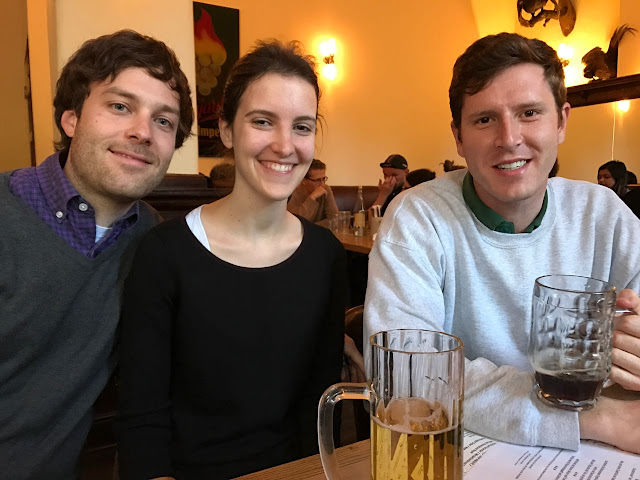 Split
Second-largest city of Croatia; lies on the Dalmatian coast.

Hotel Marmont
Located in the heart of the Old Town of Split.

Diocletian Palace
One of the most imposing Roman ruins in existence. Labyrinthine streets packed with people, bars, shops and restaurants. 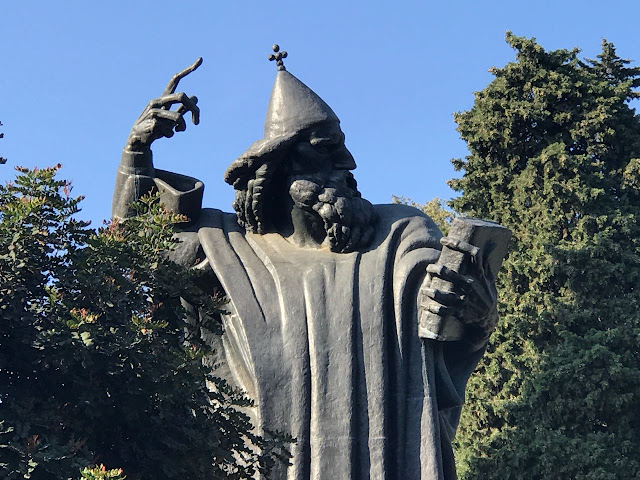 Konoba Varos
Small tavern, recommended by our taxi driver. We sat outside and enjoyed their excellent fresh seafood: Black Bream for Ed and Black Cuttlefish Risotto (made with squid ink) for me. 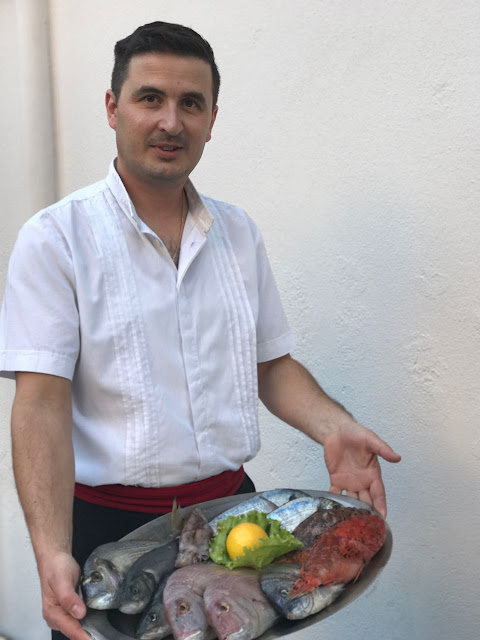 Zadar
The oldest continuously inhabited city in Croatia; situated on the Adriatic Sea.

Sea Organ
A series of broad steps leading down into the sea. The lower steps allow water and air to flow into pipes, causing an undulating, chime-like notes to be produced.

Maraschino
We stopped in a nunnery to purchase a bottle of cherry liquor, which has been produced in Zadar since the late 15th century. Taste a bit like "yum-yum," the cough syrup from my childhood -- but better.

Plitvice Lakes National Park (see above)
A chain of 16 terraced lakes, joined by waterfalls that extend into a limestone canyon.


Rovinj
Town located on the western coast of the Istrian peninsula.

Puntulina
Lovely restaurant with outdoor seating just above the sea. 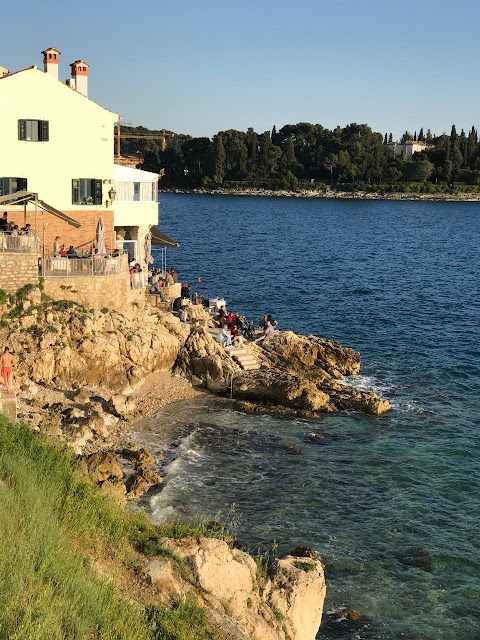 Rio Snack Bar
Don't be fooled by the name; the food was spectacular.

Groznjan
We took a number of day trips from Rovinj. Our destinations included Pula (with its incredible Roman Amphitheater), Piran (Slovenia), and Montovun. We were enchanted with Groznjan, a 14th-century Venetian fortress perched on a hill high above the Mirna river valley. Known for its truffles. 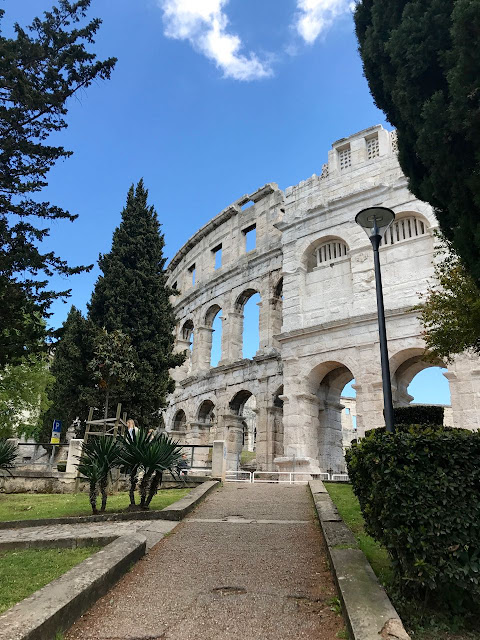 Zagreb
The capital and largest city of Croatia, located in the northwest of the country, along the Sava River.

Museum of Broken Relationships (see above)
An emotional journey around the world through hundreds of break-ups.

We used JayWay Boutique Travel to book our hotels and rental car. Their selections were spot on and made planning the trip much easier.


Posted by Debbie Galloway at 3:56 PM No comments:

Ed and I are just back from visiting Jack in Berlin and touring around Croatia. I want to tell you about the trip – and write about it so I won't forget the details – but before I do, I wanted to put in a plug for a quick field trip that we made the week before we left.

In mid-April, we headed to Columbus, IN for an overnight stay at the Inn at Irwin Gardens, a tour of the town's world-class architecture, public art and green spaces, and a separate tour of the 1950-era Miller House, commissioned by industrialist and philanthropist J. Irwin Miller and his wife Xenia Simons Miller.

You may wonder why Columbus is home to an amazing array of well-designed buildings, bridges and parks. The story goes something like this: Beginning in 1954 Cummins Engine Foundation, headquartered in Columbus, offered to pay the architect's fee for any new school -- and later expanded the program to include a variety of public buildings -- provided it was designed by an architect selected from a list supplied by the Foundation. Soon other companies and church congregations got on board and sought architects who would add to the community's quality of design. 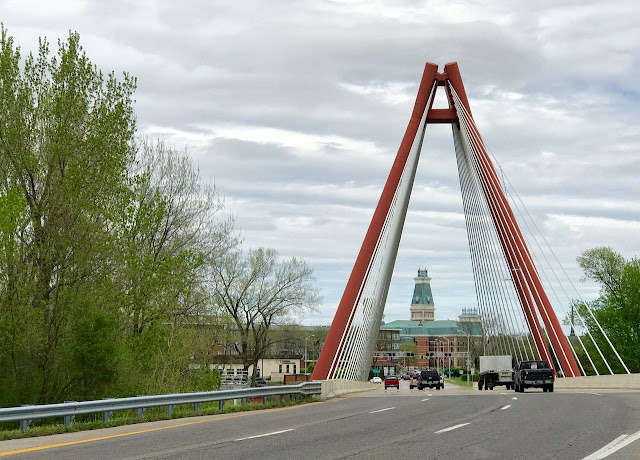 Columbus, less than two hours from our front door, is a town of just 46,000 residents but is now recognized as one of the the nation's most architecturally important cities, boasting more than 50 projects by renowned modernists. It is very impressive.

Joining us for the tour was a college friend of Ed's: Jim Collier, and our daughter Maggie. We specifically scheduled the tour because Henry Kuehn, a mentor to Maggie and fellow Rotarian to both Maggie and Ed was leading it. Henry is a knowledgeable and enthusiastic guide and made the day all the more special for us.

It was an all-around delightful trip and I hope my readers will consider making a pilgrimage. You can book a tour here. Additionally, the drive, via Madison, IN, is interesting in its own right.

We ended our visit with ice-cream from Zaharakos Old-fashioned Ice Cream Parlor, which I can also highly recommend!


Posted by Debbie Galloway at 9:15 AM No comments: