My dad, aka "Honey," died yesterday from complications of the coronavirus. Sadly, he was without family by his side but he was well taken care of by front-line Hosparus caregivers and skilled nursing staff. He may have died alone, but that is not how he lived. He lived surrounded by those whom he loved and who loved him. 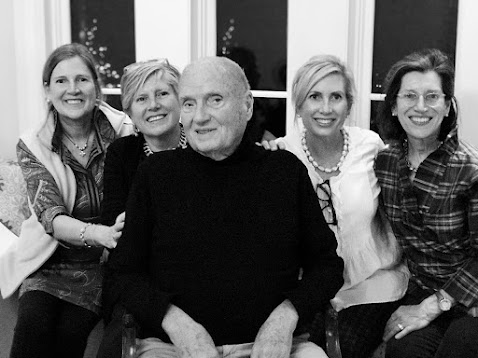 It all happened so fast. Just nine days ago – on his 90th birthday – he awoke with a fever and sore throat and was immediately placed in isolation at his memory-care facility. Still, he was able to FaceTime with his four daughters as we sang (off-key as usual) and he opened a stack of birthday cards.

The next day, a test confirmed that he had COVID-19. He was taken to a skilled nursing facility in far southwestern Louisville (owned by the same company). Three days later, he was largely unresponsive.

_______________
My mom, his four daughters, four sons-in-law, nine granddaughters, two grandsons, six great-granddaughters, and one great-grandson all called him "Honey." That's what my mom called him and then Kathy, my oldest sister, picked up on it as a toddler. The moniker stuck.
_______________
In his last years, Honey experienced some significant memory issues. But, just before Covid made our in-person visits impossible, we spent a February morning walking around Crescent Hill. We parked on Crestmoor Drive and walked over to Eastover Court and Field Elementary School. He could tell me who lived in each of the houses in the 1940s, if his father built the house, and whether he cut their grass and what they paid him: 50 cents or a dollar, depending on if he hand-trimmed all the edges. He had an amazing memory for details, especially for events that happened 70 or more years ago.
_______________

Honey left me his broom. Yes, his broom. It is a special one – quite dear to him. It is a push broom that he used to sweep out the hundreds of houses that he built in his 40+ year career. It has soft natural bristles and picks up every last bit of fine dust or dirt.

He actually bequeathed it to me when he moved from our family home in 2018 into a senior-care apartment. Before my mom died in 2014, he would drop her off at Lena's Hair Salon in St. Matthews every Thursday and would come to my house until Mom was ready to be picked up. We would walk the neighborhood streets and then he would sweep my kitchen floor. He never failed to mention that my kitchen broom couldn't compare to his.

Every time I pull the broom out of the pantry closet I smile and think of him. I remember how he loved to take care of all his girls: my mom and his four daughters. He was the one to wake us up on school mornings and fix breakfast before sending us on our way to the school bus. He was the one who cheerfully did the dinner dishes every night when we were young. He made the beds and cut the grass. He tossed wiffle balls to us in the back yard and caddied for us, teaching us to play golf (some more successfully than others).  For my older sister's 16th birthday, he bought a super-sized water heater, so that a house full of teenaged girls could take long, hot showers. It was just the kind of guy he was.

Our family will gather for a private graveside service on Tuesday afternoon. His granddaughter, Callie, and two of his grandsons-in-law, Ros and Stephen, will conduct his service. His obituary will appear in Sunday's Courier-Journal.

Posted by Debbie Galloway at 9:57 AM 2 comments: