Propagation by cuttings
First there was one. It belonged to Mary and when she left for New York City, she asked me to take care of it; it being a fiddleleaf fig houseplant. I told her I wouldn't make any promises for its long-term health, but I'd try my best to keep it alive. 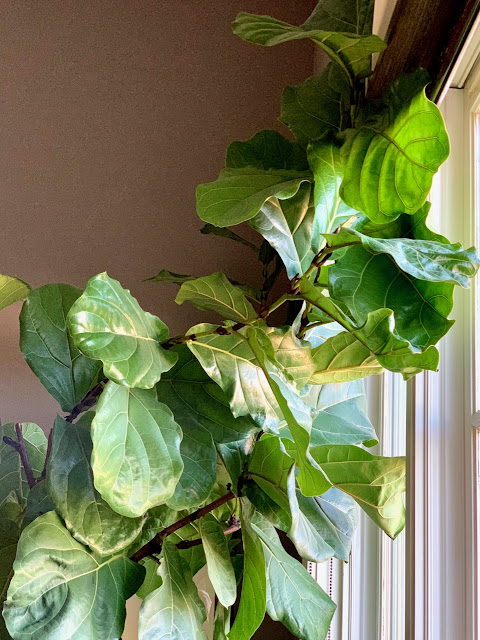 I liked it, and it liked me -- or maybe it just liked being where it could soak up the light from the front windows of our study. In the beginning, it was only about a foot tall. But inch by inch, leaf by leaf, it grew and grew, shooting up toward the 16-foot ceiling.

At one point it got so tall that it started bending over. So, I took a deep breath and cut about three feet off the main trunk, cutting just above a leaf node. Because the leaves were so large and beautiful, I plopped the cutting into a water-filled glass vase, and basically forgot about it for a month or so. 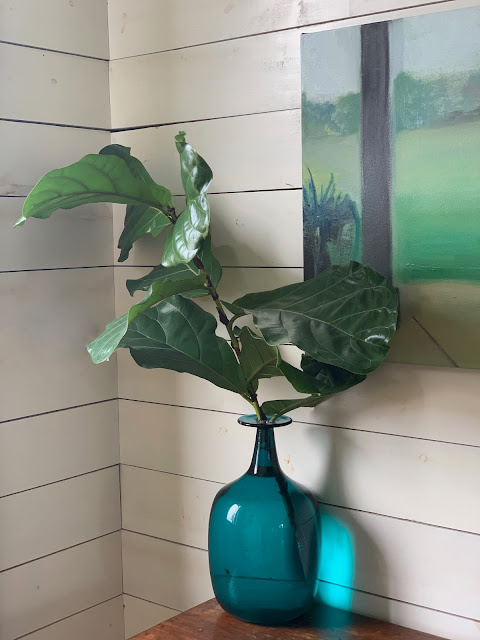 Two things happened. One: the main stem of the original plant branched where I cut it, changing the shape of the tree (for the better). 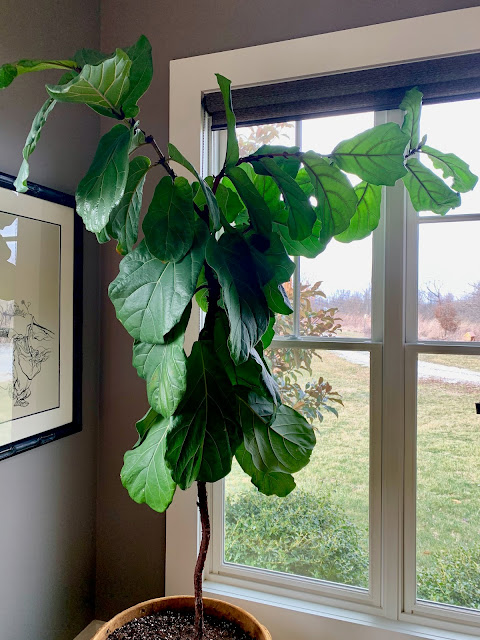 Two: when I pulled the cutting out of the vase, the bottom had roots! I stuck it in a pot filled with potting soil. It grew. So now I had two beautiful and healthy plants. We took the baby one to Brooklyn when we drove up to see Mary and Brian. It is thriving in their Red Hook loft apartment, sprouting its way up to their 30-foot ceiling.

Since then I have repeated the process and now two plant babies live at Maggie's and Nate's house while two reside on either side of our fireplace. 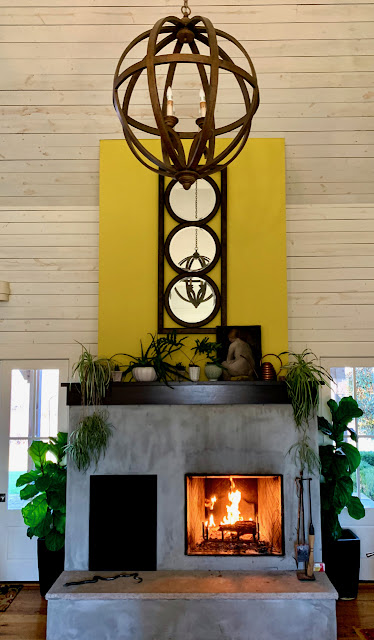 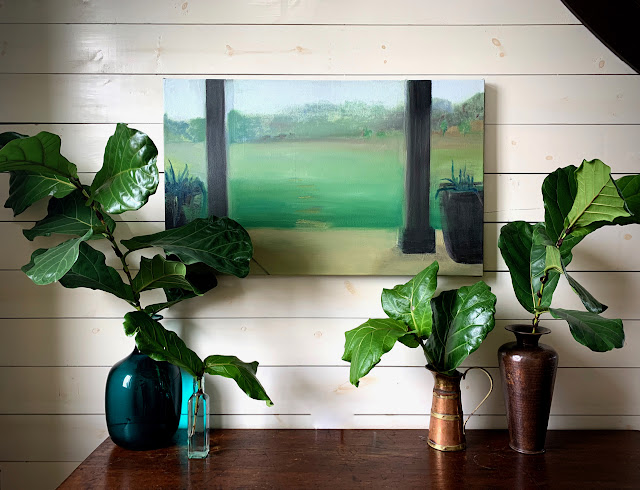 Propagation by root division
While Jack was visiting last week, he helped me move the Lenten roses that I had tucked too far back under the hydrangeas that line both sides of the cottage. He dug; I pulled. Then we divided the plants, replanting some near the front of the row of hydrangeas, some under the tulip tree in the front bee garden, and some in the side birdhouse garden. From four, we ended up with eight. 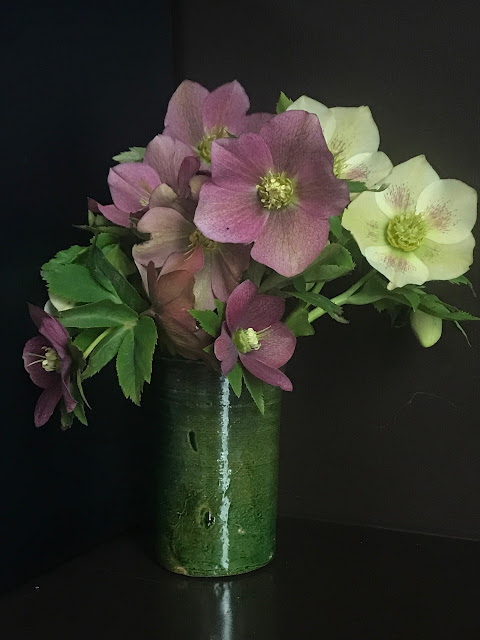 Propagation by tuber division
Waiting patiently in my basement is a box of dahlia tubers, lifted from the garden after the first frost and stored in peat. This spring, I'll divide the clumps of tubers, making sure each division has at least one strong, healthy dormant bud (eye). From the 10 or so clumps, (fingers crossed) I'll be able to plant about 40 tubers, which should produce about 4000 dahlias. That's a lot of flowers! 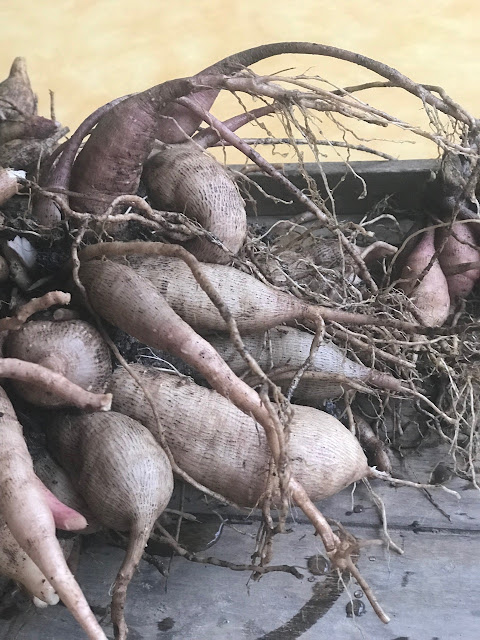 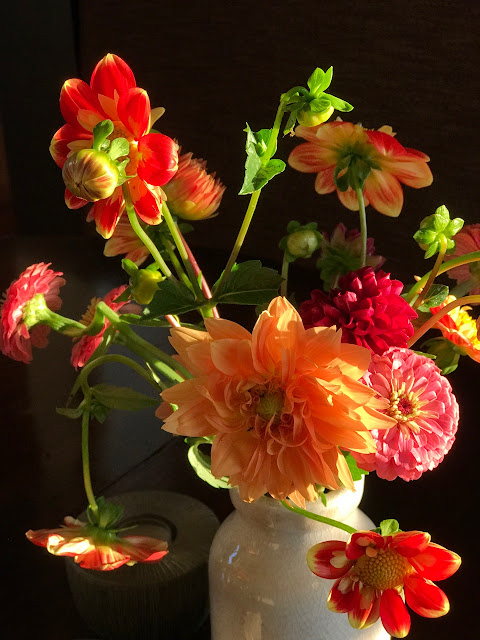 Propagation by asexual bulb cloning
In between rain showers this morning, Ed and I headed out to the back field where I had spied some clumps of daffodils that we had planted when we first moved to Farm Dover a decade ago. Since then, we have let the field grow up into native grasses and wildflowers. The original daffodils were lost among the growth. We dug up the clumps –– noting that there were many more bulbs than what we had originally planted –– and replanted them down by the creek path where they can show off their spring blooms. 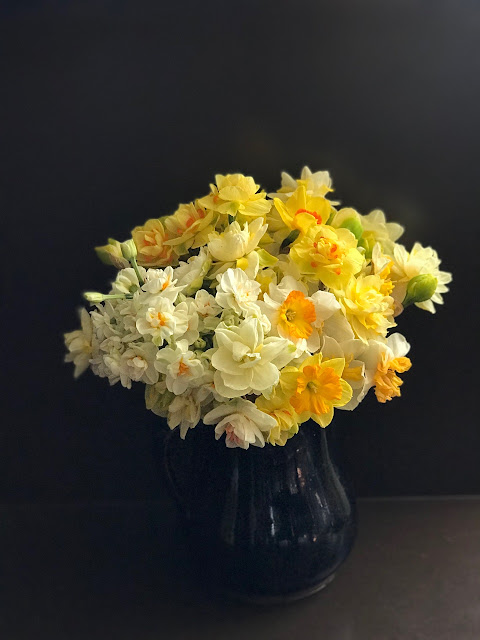 Propagation by seed
Last month I ordered a number of flower seed packets from Floret Farm, including celosia, cosmos, amaranth, quinoa, strawflowers, yarrow and zinnia. I've been dreaming of how to expand my cutting garden and will strike out this spring with hoe in hand to plant these seeds and then sit back and wait (or weed like crazy) until they are ready to harvest. 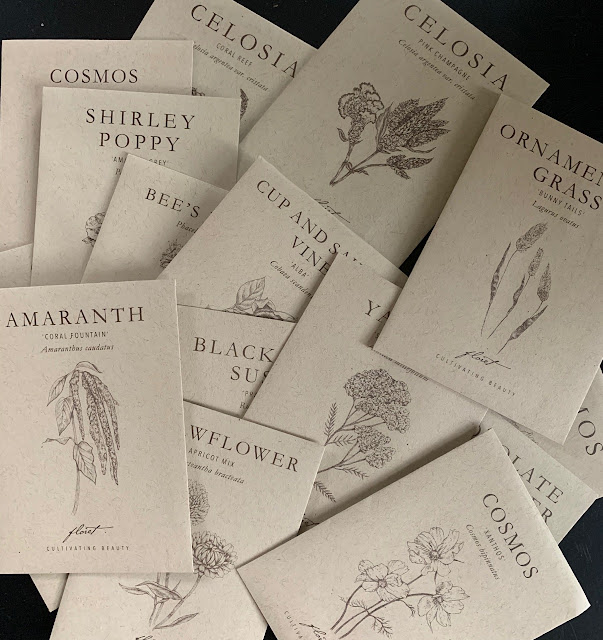 I still know so little about propagating plants, but I'm having fun learning. Between Google and experimentation, I'm making progress toward making more plants. Just as Ed calls my foraging for edibles free food, I think of propagation as free plants. And a girl (farm-her) can never have too many plants!

Posted by Debbie Galloway at 3:32 PM No comments:

A forest in my pocket

When I thrust my hands into the pockets of my farm jacket, vest or overalls, I'm bound to turn up a handful of acorns, gathered from oaks scattered about Farm Dover. Seems I carry a whole forest around with me. 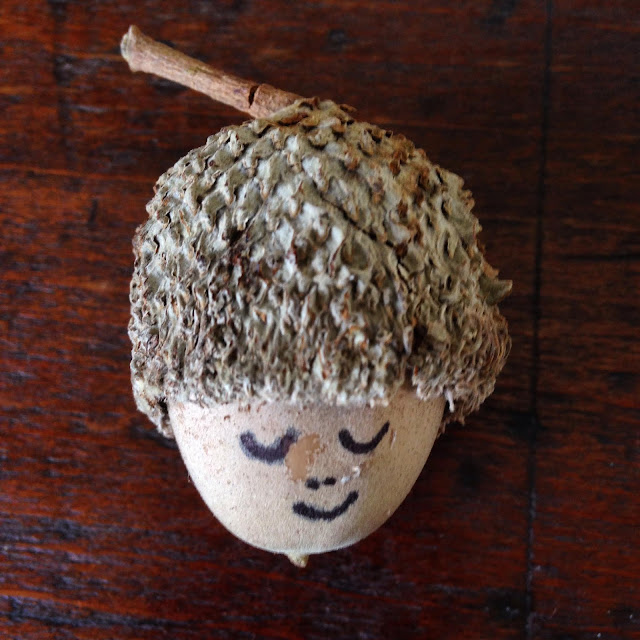 I also manage to scavenge acorns from our travels; and some come from magnificent oaks I see around town, especially those at Second Presbyterian or Cave Hill Cemetery. My favorite source is an incredible tree in the Indian Hills front yard of my friend Jody. 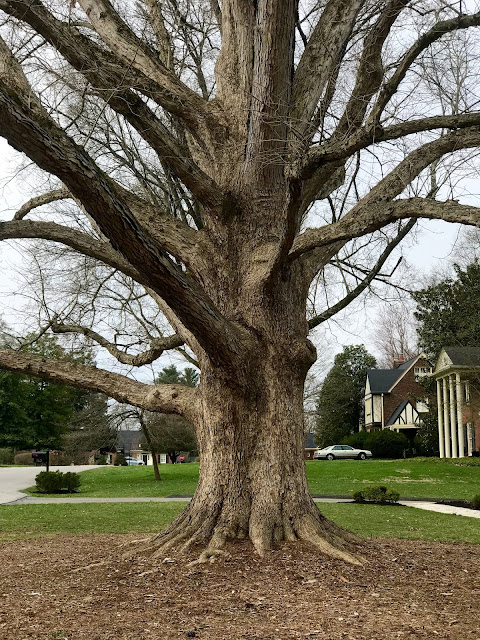 Eventually I get around to depositing my treasures in a baggie of moist dirt that I keep in the fruit-and-vegetable drawer of the fridge. After a couple of months of cold stratification, an embryonic root will appear on some of the acorns and I'll know it is time; I sort the nuts and plant them in tiny pots, prop them near the front window in our study, water them every Sunday morning, and impatiently wait to see them poke up their tiny sprouts. 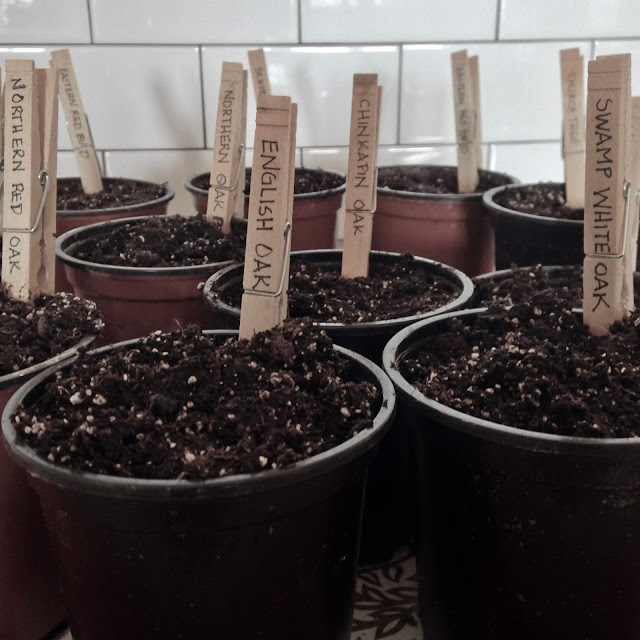 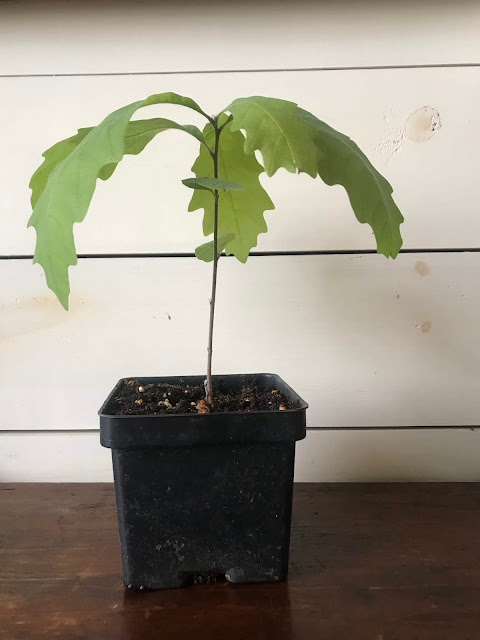 Eventually, Ed and I plant these tiny oaks along our trails, protecting them from deer, bunnies and weeds with a chicken-wire cage surrounded by a ring of mulch. Then, we take great pride in watching them grow.
_____________________

I've always had a thing for acorns. In fact, in my previous life, the logo for my marketing company was a stylized acorn/monogram G. (I somehow equated tiny acorns with good marketing ideas and mighty oaks with successful organizations).

In my life at Farm Dover, this transformation from tiny acorns to magnificent oaks takes on a whole new level of wonder and obsession. As I roll these beautiful nuts around in my hands, I ponder the miracle of having one's destiny within. It was Aristotle who first described this purpose of existence, an internal code which turns potential into reality. It is in the entelechy of a caterpillar to become a butterfly; within the acorn lies the oak. 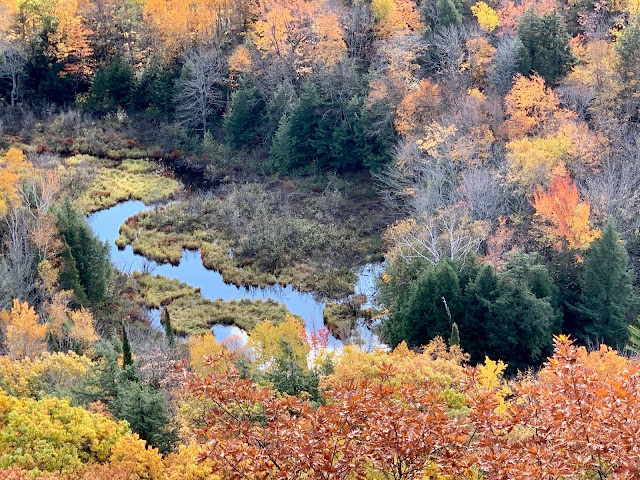 Not all the seeds that I plant are oaks – some are pawpaw, chestnut or buckeye, a few are hickory. Of all the trees we have planted from seeds or seedlings (over 1000), perhaps 40 percent are oaks. Of all the species that we could chose, oaks sequester the most carbon and support the greatest number of butterflies and moths, 534 to be exact (according to Douglas Tallamy, University of Delaware professor of entomology). And, if you consider the number of species around Farm Dover that depend on acorns for food: deer, raccoons, turkey, mice, squirrels, – plus, the dozens of species of birds that depend on the canopy and cavities for nesting sites, you can begin to appreciate all they offer – truly, they are quintessential giving trees. 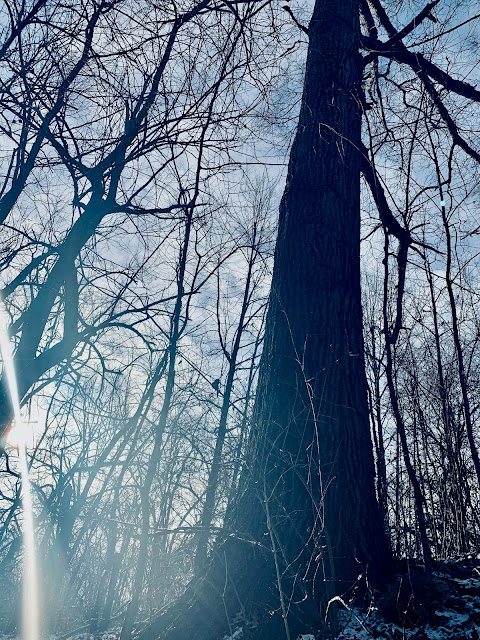 Last week I finished reading "The Overstory," last year's winner of the Pulitzer Prize in Fiction. It was as if Richard Powers wrote this book just for me. I've not stopped thinking about it since I turned the last of its 500+ pages. While the epic is told through nine characters, it is the old trees that are the real protagonists of the story. They are the ones with the real wisdom -- and the ones we must learn to listen to. I'm trying.

There is a folksong written by Malvina Reynold in 1974 that goes something like: If you love me, plant me a rose. If you love, love, me, plant me an apple tree. I venture to say that if you really love me -- or this fragile planet we call home – plant me an oak tree. Now that's true love.


Posted by Debbie Galloway at 6:41 PM No comments: