It’s damp.
I’m feeling cranky and a bit moldy. A record 13.6 inches of rain has fallen in the past two weeks and more is expected tonight. That translates of 91 billion gallons of water dropped on our muddy country farm and surrounding area.
I’m not one to usually complain about the rain as there is nothing nicer than a good rainy day to stay inside, read a book and cook a bit. But enough is enough. I’ve got asparagus to plant, strawberries to get in the ground, grass seed to spread, potholes to fill and fish to feed.
Yes, I said fish to feed. On Saturday, in the midst of a downpour, we slid 500 bluegill, 125 bass, 50 catfish, 5 pounds of fathead minnows, and 50 bull frog tadpoles into our lake.  Only after we bought them from the fish truck up at Metzger’s Country Store did we find out we had to feed our fish – as there is nothing yet in the lake for them to dine upon. So, everyday at dinnertime, we pull on our Glempler mud boots and slosh down to the dock with a Tupperware bowl full of fish food from the 50 lb. bag we purchased for our dear little fish.
Needless to say, we are looking forward to sunny afternoons of fishing from the banks of our lake. Here’s to sunshine!
Posted by Debbie Galloway at 5:06 PM 2 comments:

I have been accused of being too attached to things. It is usually not the item so much as that which I associate with it – either a person or a memory. So my ancient, wobbly egg poaching aluminum pan once belonged to Aunt Frances and I wouldn't trade it for the fanciest model from William Sonoma. I'm attached to my costume jewlery from Grandmommy, paintings from Aunt Melta, quilts from Aunt Gladys, and every clay bowl that my children ever made at Montreat.

I've been delighted with gifts that family and friends have bestowed on us for our new home. Many are intended for our garden – transplanted from others' gardens. They give me great delight every time I see them and cause me to count my blessings for having these people in my life.

I'm hoping all these plants will take root and flourish in their new environment, bringing us years of enjoyment and a whole bouquet of fond memories.
Posted by Debbie Galloway at 6:16 PM No comments:

Posted by Jack Galloway
My name is Jack Galloway. I am the son of the authors of this blog and I have been asked to contribute an entry. I have found the role of guest blogger a much harder one than I had anticipated.
Though I now count myself a proud member of the landed gentry of Shelby County, I can but imagine what life is actually like on those thirty-some-odd acres off of Dover Road. In the city, when I wake to the wretched cacophony of construction, garbage trucks, and car alarms, I long for the profound silence of the countryside. As I go about my day, my reverie continues. The pigeons and house sparrows become murmuring doves and chipper songbirds, and the ugly mugs of the pedestrians passing below my window are like so many daffodils and tulips.


As I dream, I am beset with the age-old inner conflict between homesickness and wanderlust. This dilemma is not new to me, but something about my parents’ living on a farm lends it greater urgency. Perhaps it’s the obvious contrast of city-living and pastorialism.
For me, home is now more that a house and its inhabitants; it is a living thing that changes with the passing weeks, especially now that it’s spring. Every entry on this blog details some new growth or change—the blooming of the daffodils, the advent of the honeybees, the greening of the countryside and the gradual settling in of the house and its surroundings by its inhabitants—so much to be seen and felt for such a quiet corner of the earth.

Surrounded by the great goings-on of the city, I feel like I am missing out on something even grander. My longing is poignant, certainly, but it is also joyous. To have such a place as my new home, peopled by such lovely, loving people as my mother and father, is a blessing, and the thought of returning home will comfort me wherever I go.
Posted by Debbie Galloway at 2:12 PM 1 comment:

We were all a buzz early this morning as Nate and his dad, Doug, were headed our way with two bee hives and hundreds (thousands?) of honey bees.

Maggie has enthusiastically taken up beekeeping and we have enthusiastically volunteered to be the landlord for her bees. Doug has been an apiarist for years and was most encouraging to Maggie.

They arrived early this morning with hives in the back of their truck. We waited for a break in the morning showers and then unloaded the hives and bees and set them up just in back of the cottage. 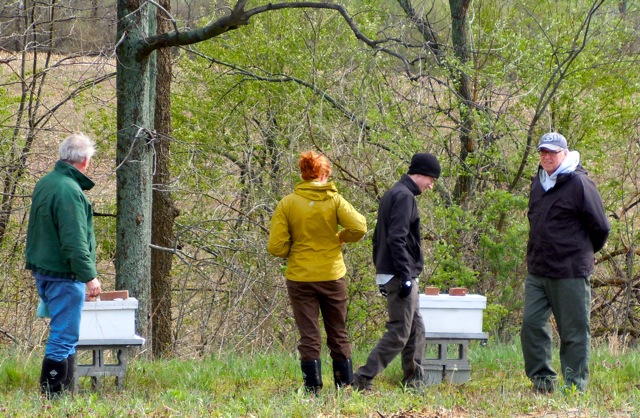 As Maggie's birthday is upcoming, Doug and Nate also brought Maggie her very own table saw, which they set up in our basement. So, I guess we are landlords for a table saw as well. 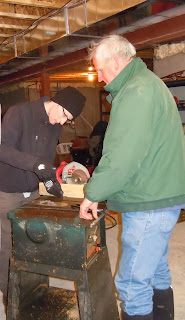 And Nate's mom sent along a Madame Alexander doll that she thought Maggie might like. She was right. The doll is called: Maggie Goes Green. How perfect. 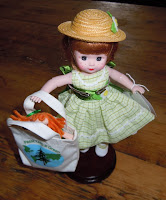 So, our thanks to Nate, Doug and Lisa for showering Maggie (and us) with their expertise, time and gifts. If all goes as planned, here's what friends and family can expect for future gifts: 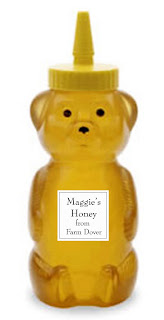 Our windows are open, blowing in a not so gentle – but very warm – breeze; the tulips and daffodils that Jack planted are up; and a mama and papa goose are checking out our lake, looking for a nice place to nest. I hope they chose us. 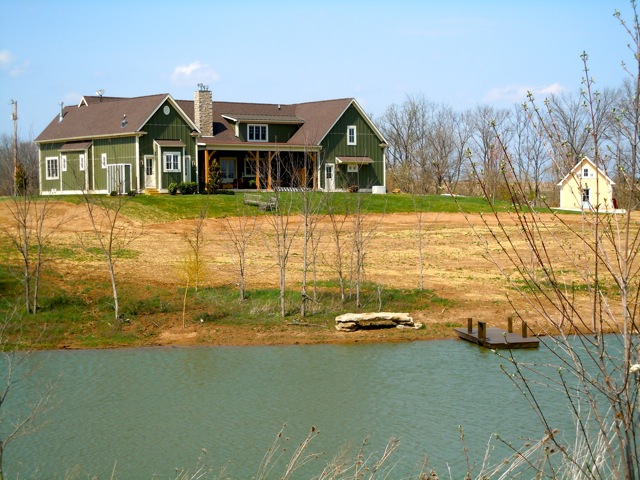 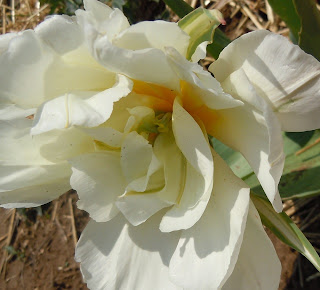 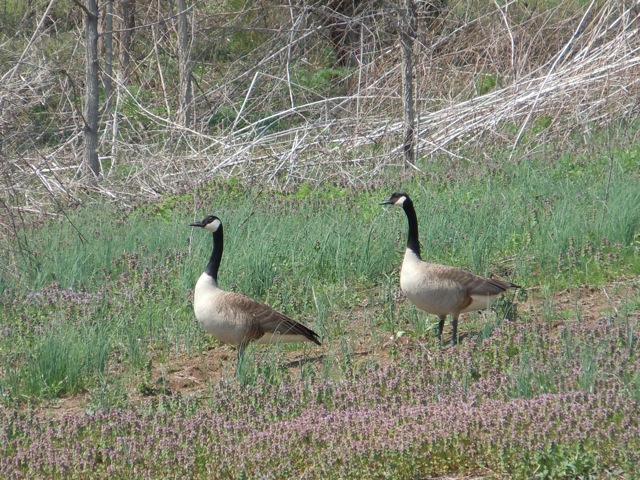 Posted by Debbie Galloway at 3:24 PM No comments:

Continuing on the Theme of Time

Posted by Ed and Debbie Galloway
For something different, but continuing on the theme of time, we'd like to refer you to a charming article by Jack’s friend at McGill, Matthew Kassel.
Matt is a columnist for the McGill newspaper.  He also writes a very informative and insightful blog about jazz.
Remember Matt’s name.  We wouldn’t be surprised if we hear of him again in the future. 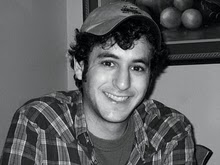 Posted by Debbie Galloway at 12:08 PM No comments:

With the death of Aunt Gladys at 96 and of Mabel, my friend Bob’s mother, who died just before her 102 birthday, time has been on my mind.  Both of them talked about how fast it had gone by and both thought they had more of it coming.
It’s hard to believe that it’s been over a year since we sold the house on Rainbow Drive and moved to the Rudds’ house where we’ve been so happy. Now, it’s time to make our home on the farm on Dover Road.
Most of our friends and acquaintances have been pretty kind about all this (they're nicer than I am).  Beyond asking how far is the commute and where is a liquor store and how are you going to get internet, they have by and large kept their misgivings to themselves.  Never wondering aloud, to me at least, what on earth are Ed and Debbie thinking – a quarter mile to the morning paper, no neighbors, what if they get sick in the night, what if they’re eaten by coyotes or blown up by a meth lab,etc.
It’s a little anxiety-ridden – what have we failed to consider?  Well, we’re about to find out.
Anyway, I get to look at my things again, which have been packed away in boxes for the past year. I had to go through a major downsizing when we got married 25 year ago.  Always generous, Debbie let me keep all my bachelor stuff – as long as it would fit in a cigar box. And I still have it:  a King Edward cigar box with my arrowhead, corn cob pipe, Mammoth Cave pencil shaped like a rifle, Stan Musial baseball card and Indian head penny. 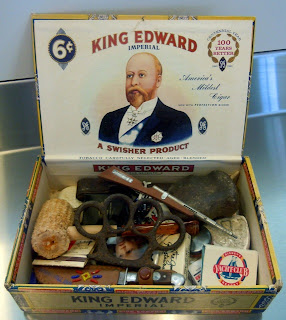 However, in the meanwhile I’ve collected a bunch of other invaluable stuff that will be like new to me -- when I find it.
For example, I bought an old fishing rod at an antique store in Florida.  "Look", I said, "only $90".  Debbie stumped me with her response, “What are you going to do with it?” Now, maybe I can find out.
I do swear to get rid of clothes that I don’t wear … unless, maybe I’ll need them on Dover Road.  Also, I’m going to go through everything to find all sock matches.  For years I’ve expected each missing sock to come home like a long-lost child.  Now, I promise to get rid of all unmatched socks – well, unless these perfectly good singles match up pretty well – at least well enough for the farm. We’ll see.

And so forth and so on.
Tune in soon for the rest of the story…
Posted by Debbie Galloway at 3:13 PM No comments: